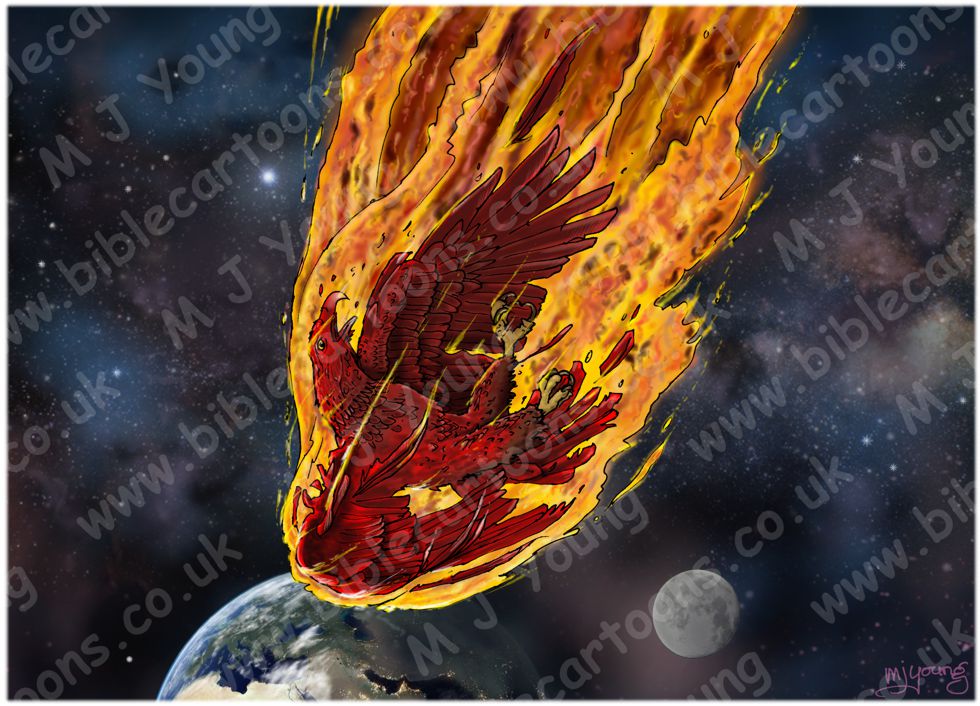 This is what the Sovereign Lord says about Edom—
We have heard a message from the Lord:
An envoy was sent to the nations to say,
“Rise, and let us go against her for battle“—

2 “See, I will make you small among the nations;
you will be utterly despised.
3 The pride of your heart has deceived you,
you who live in the clefts of the rocks [1]
and make your home on the heights,
you who say to yourself,
‘Who can bring me down to the ground?’
4 Though you soar like the eagle
and make your nest among the stars,
from there I will bring you down,”
declares the Lord.

TIME OF DAY:
Not specified in Biblical text.

LIGHTING NOTES:
The fire surrounding the falling eagle provides the light for his scene. The sun (unseen, behind & to the left of the viewer) also illuminates the scene.

CHARACTERS PRESENT:
None, unless you count the eagle!

RESEARCH/ADDITIONAL NOTES:
This is an my visual interpretation of the phrase in verse 4, which really caught my eye. The poetic description of an eagle amongst the stars falling was just too good to pass up! It was fun making the eagle look like a meteorite falling towards the earth below it.

I found photo reference for a bald eagle coming in to land, & rotated the picture 180 degrees so it looked like it was falling instead of flying. Then I draw the outline drawing of that, with changes to wing position, taloned foot & leg positions, & added various other elements such as additional feathers.

I decided to make the eagle red, because the Edomites (about which this prophecy concerns) took their name from the Old Testament character Esau, brother to Jacob. Esau (aka Edom) was born red, &/or was hairy, &/or had red hair, hence his name.

I found some nice photo’s of the earth & moon from space which form the basis of my drawing. I have heavily simplified the colouring (& added new clouds & weather systems to the earth), so these bodies don’t detract too much from the focus of attention: the fiery eagle. Neverthless, I felt the moon was still a bit of a distraction, due to its brightness, so have darkened it & reduced the contrast of its surface features, so as to make it recede into the background a bit more.

Apparently nothing is known of the background, life or ministry of the prophet Obadiah. His name was a common one in Old Testament times, so there is little to give us a clue there. Obadiah means “Worshipper of Yahweh.”

View all Bible Cartoons in Obadiah Go to Search by Bible Book page Do I need High or Medium qlty cartoons? FAQ’s