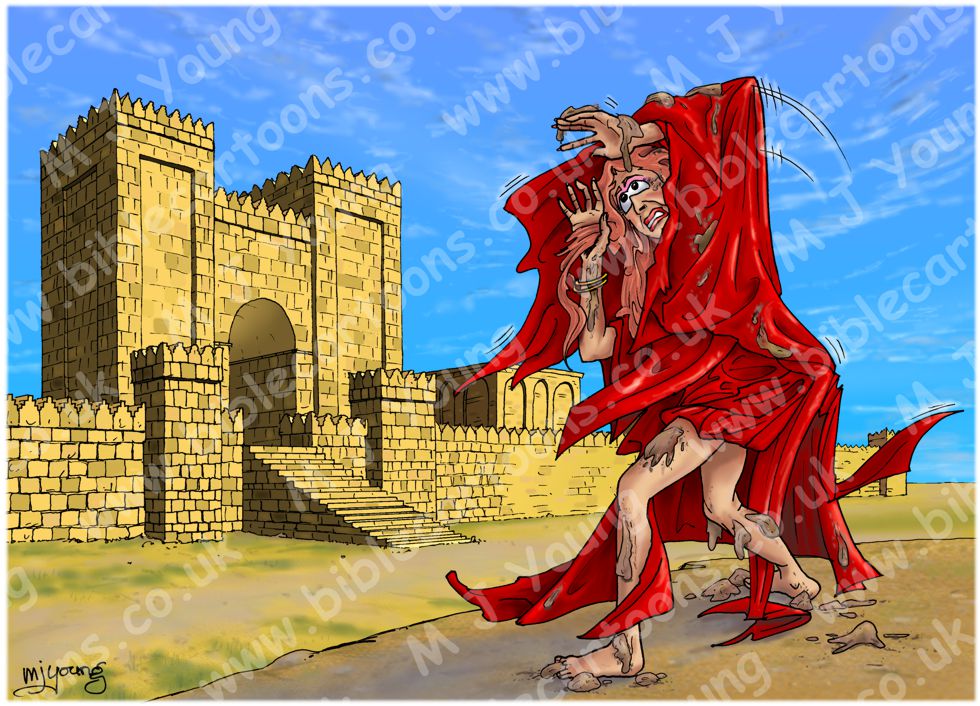 Nahum 1:1-7 (ANIV)
[Woe to Nineveh]
1 Woe to the city of blood,
full of lies,
full of plunder,
never without victims!
2 The crack of whips,
the clatter of wheels,
galloping horses
and jolting chariots!
3 Charging cavalry,
flashing swords
and glittering spears!
Many casualties,
piles of dead,
bodies without number,
people stumbling over the corpses—
4 all because of the wanton lust of a harlot,
alluring, the mistress of sorceries,
who enslaved nations by her prostitution
and peoples by her witchcraft.

5 “I am against you,” declares the Lord Almighty.
“I will lift your skirts over your face.
I will show the nations your nakedness
and the kingdoms your shame.
6 I will pelt you with filth,
I will treat you with contempt
and make you a spectacle.
7 All who see you will flee from you and say,
‘Nineveh is in ruins—who will mourn for her?’
Where can I find anyone to comfort you?”

TIME OF DAY:
Not specified in Bible text. I have set the time as mid morning.

LIGHTING NOTES:
The sun (above, behind & to the right of the viewer) illuminates the figure & city, casting shadows from right to left.

CHARACTERS PRESENT:
A woman: the personification of the Assyrian city Nineveh, to which the prophecy of Nahum is directed.

RESEARCH/ADDITIONAL NOTES:
The woman in red in this scene is a personification of the city Nineveh, the chief or capital city of the Assyrian empire.

Just in case you wonder what the woman looks like without the dirt all over her, here’s that view too: 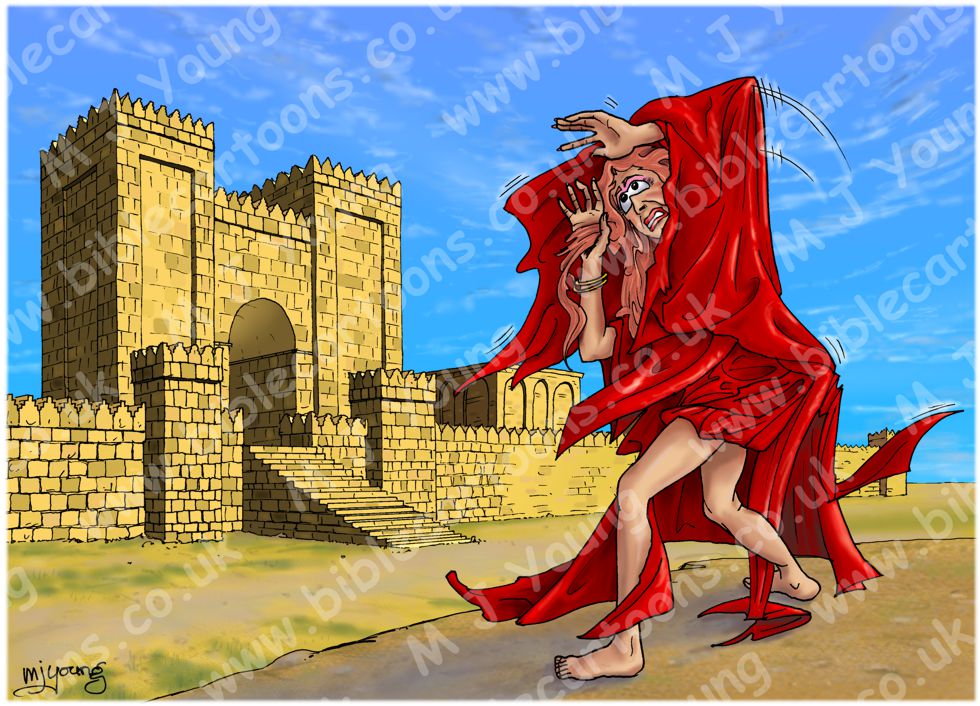 Here is a close-up view of the woman’s face & arms:

Verse 5 is very significant because in it the Lord God declares, “I am against you,” that will always spell doom for anyone, any city or any nation!

I decided to draw a woman personify the wicked city of Nineveh because the Bible text above states in verse 4 “all because of the wanton lust of a harlot, alluring, the mistress of sorceries, who enslaved nations by her prostitution and peoples by her witchcraft.” And in verse 5 it states “I will lift your skirts over your face” which I take to mean an implication of the femininity of the city.
[Bold added for emphasis – MY]

4 …“Whore City, Fatally seductive, you’re the Witch of Seduction, luring nations to their ruin with your evil spells.”

From these references you can see why I decided to show the woman as a witch harlot. In the previous page’s version of this scene (version 01) the witch has various objects scattered about on the ground around her: a chalk circle, skull, bowl of blood being spilled by mud, a black candle, dagger, etc. Notice the small broken statuette, which is of the “goddess” Ishtar who was the East Semitic Akkadian, Assyrian and Babylonian goddess of fertility, love, war, and sex. There is also a cobra snake rapped around the woman’s leg.

The idol worship, witchcraft & cruel practices of the Assyrians was the product of God’s eventual destruction of the city of Nineveh, & the Assyrian empire.

Because some viewers might not like these references to the occult & idolatrous practices, version 02 (This page) has these objects removed.

I decided to add a depiction of the city walls, gate, towers & some buildings of the city of Nineveh in the background, tying together the woman with the city itself. The woman has a red dress on which is refered to as “your seductive silk robes” in the Message version, making her a “scarlet woman” (a harlot or prostitute (verse 4).) I have shown the woman’s dress blown up & over her head in quite a tangle! That is a reference to verse 5, which reads “I will lift your skirts over your face. I will show the nations your nakedness and the kingdoms your shame.”
When the word “nakedness” is translated from Hebrew, it often means revealing the undergarments, rather than actual nudity.

You will see from my picture that I have added lots of dirt & mud on the woman’s skin & red dress, which is a reference to verse 6 “I will pelt you with filth,” which is the Hebrew word shik·küts’, which translates into detestable thing or idol, abominable thing, abomination, idol, detested & filthy thing. The Message version translates the word into “dog dung” by the way!

Who was Nahum?
The book of Nahum only gives the prophet’s name & home town; nothing else is known about him.

Referred to as Nahum the Elkoshite (Nahum 1:1), this name means “consolation” or “comfort,” which may be an allusion to the comfort his prophecy would induce to Judah.

“Elkoshite” suggests that Nahum’s hometown was Elkosh, but the site of that town or city is unknown. Bible scholars, commentators & archeologists have variously associated it with Capernaum in Galilee, or on the Tigris River north of modern-day Mosul near Nineveh, or elsewhere east of the Jordan River. Given Nahum’s concern for Judah (Nahum 1:12, 15), perhaps it could have been located in southern Judah.

Nineveh – The city.
Nineveh was situated on the east bank of the Tigris River, just north of Mosul, in the north of the modern-day country of Iraq. Jonah called Nineveh “a great city” (Jonah 1:2; 3:2-4; 4:11) stating that it took several days to walk around.

Nineveh was the capital of one of the cruelest, most powerful, most idolatrous empires in world history, the Assyrian empire. Many records exist from the Assyrians themselves, of the horrific torture & execution of captured prisoners of war, attesting to the fearsome & cruel nature of it’s leaders. Little wonder Nahum called Nineveh “the city of blood” (3:1) & a city noted for its “cruelty” (3:19.) 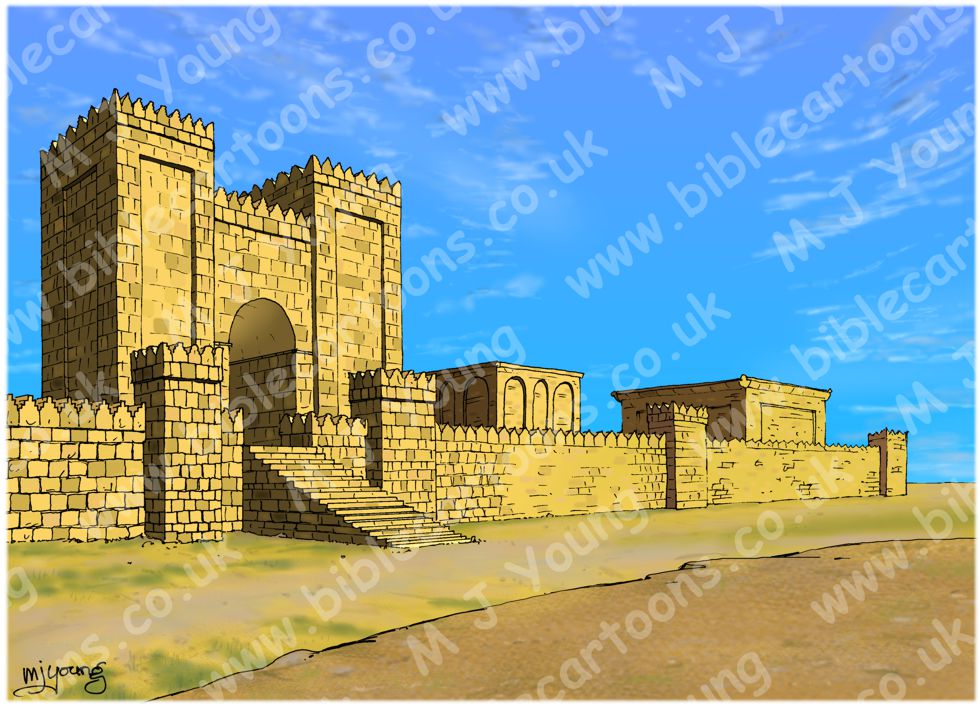 Jonah’s earlier prophecy about Nineveh.
The prophet Jonah was sent by the Lord to prophesy against the city of Nineveh. In his time the Assyrians relented & humbled themselves before God, so the Lord relented & did not send the doom He had promised… at that time. No doubt the Lord knew that Nineveh’s (& Assyria’s) repentence would not last, & that eventually the city & empire would be destroyed.

There is about 40-50 years between Nahum’s prophecy & the destruction of Nineveh.

I thought I’d include 2 other versions of the Bible quote for reference here:

5 “I’m your enemy, Whore Nineveh—
I, God-of-the-Angel-Armies!
I’ll strip you of your seductive silk robes
and expose you on the world stage.
I’ll let the nations get their fill of the ugly truth
of who you really are and have been all along.
6 I’ll pelt you with dog dung
and place you on a pedestal: ‘Slut on Exhibit.’
7 Everyone who sees you will gag and say,
‘Nineveh’s a pigsty:
What on earth did we ever see in her?
Who would give her a second look? Ugh!’ “

Nahum 3:1-7 (AMP)
1 WOE TO the bloody city! It is full of lies and booty and [there is] no end to the plunder! [2]
2 The cracking of the whip, the noise of the rattling of wheels, and prancing horses and chariots rumbling and bounding,
3 Horsemen mounting and charging, the flashing sword, the gleaming spear, a multitude of slain and a great number of corpses, no end of corpses! [The horsemen] stumble over the corpses!
4 All because of the multitude of the harlotries [of Nineveh], the well-favored harlot, the mistress of deadly charms who betrays and sells nations through her whoredoms [idolatry] and peoples through her enchantments.
5 Behold, I am against you, says the Lord of hosts, and I will lift up your skirts over your face, and I will let the nations look on your nakedness [O Nineveh] and the kingdoms on your shame.
6 I will cast abominable things at you and make you filthy, treat you with contempt, and make you a gazingstock.
7 And all who look on you will shrink and flee from you and say, Nineveh is laid waste; who will pity and bemoan her? Where [then] shall I seek comforters for you?

View all Bible Cartoons in Nahum Go to Search by Bible Book page Do I need High or Medium qlty cartoons? FAQ’s