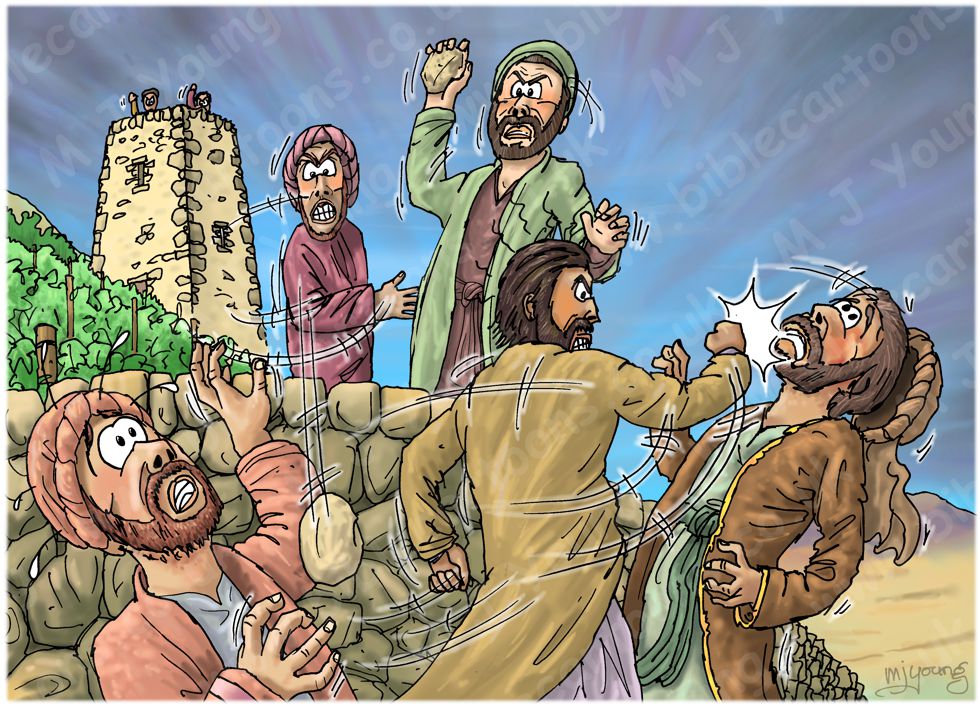 Matthew 21:34-35 (ANIV)
[Jesus said] 34 “When the harvest time approached, he [the landowner] sent his servants to the tenants to collect his fruit.
35 “The tenants seized his servants; they beat one, killed another, and stoned a third.

LIGHTING NOTES:
The sun rising on the left (east) of this scene provides natural light, and casts shadows to the right of people and objects.

CHARACTERS PRESENT:
Two servants sent by the landowner, being beaten and/or stoned by the tenant farmers.

RESEARCH/ADDITIONAL NOTES:
The landowner in Jesus’s parable had the right to send his servants to collect his share of the harvest produce – he did own the land after all, and the farmers working the land were tenants on his land. Nevertheless, the tenant farmers decided they wouldn’t give the landowner his due share of the crops. I my scene we see the tenant farmers beating and stoning the two servants sent by the landowner.

Bible commentators see this parable as Jesus speaking of the nation of Israel, which had been carefully prepared by God to be His “fruitful vineyard” (see Isaiah 5:1-7 below). Within the parable the care of the vine had been entrusted to the nation’s religious leaders, but they had failed to acknowledge the landowner’s (their Master’s) right over them, and, with that rebellious nature in mind, had treated His messengers and prophets badly. When God finally sent His son, they would ultimately kill him, outside Jerusalem’s walls, as prophesied in the Old Testament.

Notice that in my picture the two tenant farmers in the watchtower are also looking angry and shaking their fists at the landowner’s servants!

[1]
Isaiah 5:1-7 (ANIV)
1 I will sing for the one I love
a song about his vineyard:
My loved one had a vineyard
on a fertile hillside.
2 He dug it up and cleared it of stones
and planted it with the choicest vines.
He built a watchtower in it
and cut out a winepress as well.
Then he looked for a crop of good grapes,
but it yielded only bad fruit.

3 “Now you dwellers in Jerusalem and men of Judah,
judge between me and my vineyard.
4 What more could have been done for my vineyard
than I have done for it?
When I looked for good grapes,
why did it yield only bad?
5 Now I will tell you
what I am going to do to my vineyard:
I will take away its hedge,
and it will be destroyed;
I will break down its wall,
and it will be trampled.
6 I will make it a wasteland,
neither pruned nor cultivated,
and briers and thorns will grow there.
I will command the clouds not to rain on it.”
7 The vineyard of the Lord Almighty
is the house of Israel,
and the men of Judah
are the garden of his delight.
And he looked for justice, but saw bloodshed;
for righteousness, but heard cries of distress.