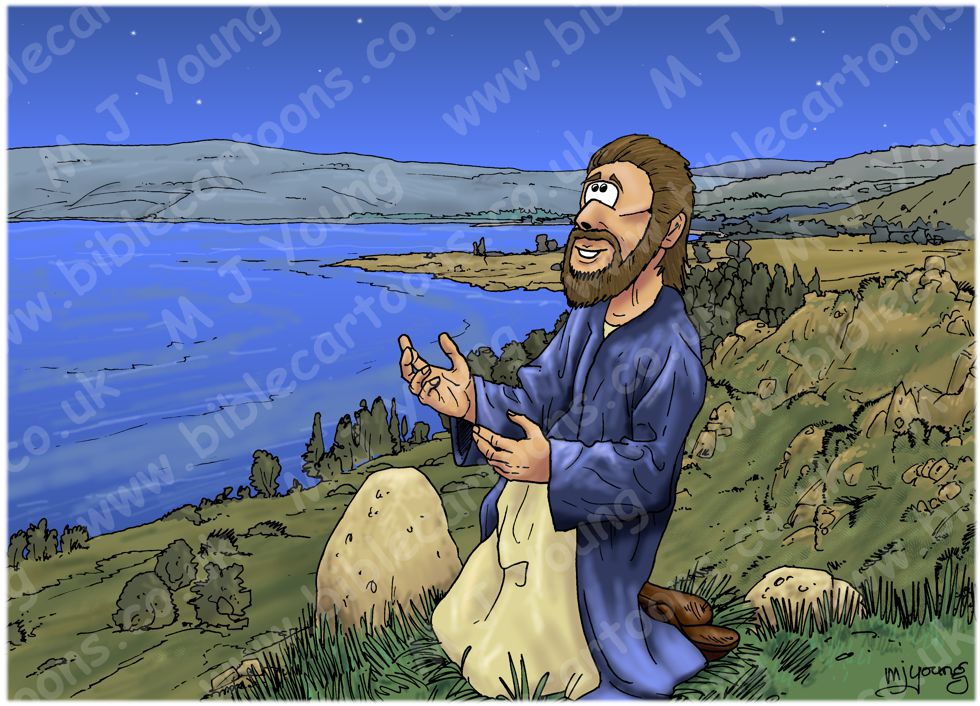 Matthew 14:22-24 (ANIV)
22 Immediately [after feeding the 5,000 men] Jesus made the disciples get into the boat and go on ahead of him to the other side [of the Sea of Galilee *1], while he dismissed the crowd. 23 After he had dismissed them, he went up on a mountainside by himself to pray. When evening came, he was there alone, 25 but the boat [with the disciples] was already a considerable distance [1] from land, buffeted by the waves because the wind was against it.

TIME OF DAY:
Verse 23 tells us “when evening came”. This scene is set at night time.

LIGHTING NOTES:
This scene is at night. There are a few stars providing blue/white light in the scene.
In the second version there is an additional beam of light coming from the Father in heaven which illuminates Jesus in that scene.

CHARACTERS PRESENT:
Jesus, kneeling on grass, praying to God the father in heaven.

RESEARCH/ADDITIONAL NOTES:
This is actually the last scene I have drawn for this set of Bible Cartoons. I used photographic reference for the rocks & plants of the lake shore. 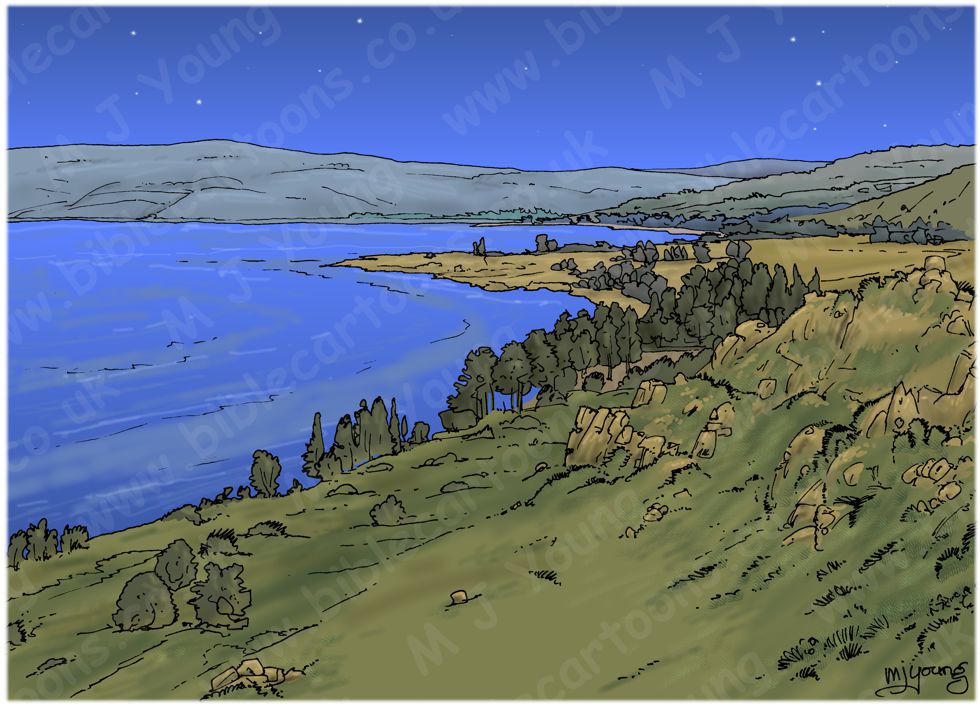 Names of the lake
*1 The Sea of Galilee is also called Lake Kinneret, Lake Gennesaret, the Sea of Tiberias or Tiberias Lake.

‘Known in the Hebrew Bible as Chinnereth, Josephus used the Hellenized form of this name, Gennesar or Gennesaritis, most frequently in his writings. Luke uses this term, but the more common New Testament designation is the familiar “Sea of Galilee.” John twice refers to it as the “Sea of Tiberias.” Pliny notes that some called it Tarichaeae after the name of another town along its shore.’
(Source: http://www.biblearchaeology.org/post/2009/03/Jesus-and-the-Sea-of-Galilee.aspx#Article)

The Bible Knowledge Commentary has an interesting point, as follows:
‘Sending the disciples into the boat did two things: it got them away from the crowd, and it gave them opportunity to ponder the significance of what had just happened through them.’ [i.e. the feeding of the 5,000.]

The Sea of Galilee is the lowest freshwater lake on earth at approximately 700 ft (210 metres) below sea level.

Sea of Galilee shrinking
It is highly probable that the sea of Galilee once covered a much larger surface area, but modern industry & ever increasing population tend to use more water today than ever before. ‘On many beaches the sea has retreated by as much as 150 metres’, according to this Financial Times article:
(Source: Israeli demand draining Sea of Galilee, by Tobias Buck in Jerusalem
http://www.ft.com/cms/s/0/4efd6090-705f-11dd-b514-0000779fd18c.html#axzz2X9RU7mvN)