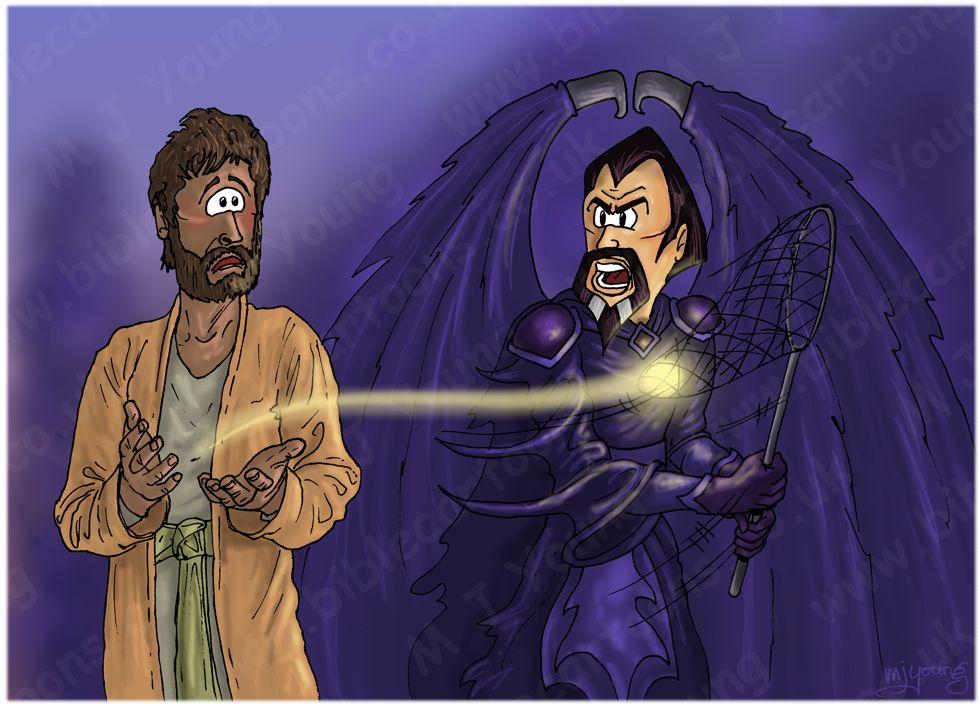 Matthew 13:18-19 (NLT)
18 [Jesus said] “Now listen to the explanation of the parable about the farmer planting seeds: 19 The seed that fell on the footpath represents those who hear the message about the Kingdom and don’t understand it. Then the evil one comes and snatches away the seed that was planted in their hearts.”

LIGHTING NOTES:
Most of the light for this scene comes from the ball of light being snatched out of the man’s hands.

CHARACTERS PRESENT:
A man, a new believer on the left of picture, wearing an orange-brown outer robe.
Satan, the devil, snatching the man’s new-found belief.

RESEARCH/ADDITIONAL NOTES:
There are two versions of this scene:
01) (This page) Matthew 13 – Parable of the sower – Scene 07 – Seed snatched (Man version).

I wanted some way to visually represent the seed, or message about the Kingdom (of God), which Jesus talks about in this parable. He explains to his disciples that, “the seed that fell on the footpath represents those people who hear the message about the Kingdom, but don’t understand it”. Jesus went on to explain that for such people, “…the evil one (Satan, the devil) comes and snatches away the seed that was planted in their hearts.” So I decided to represent the gospel message (which is the same as message about the Kingdom (of God)), as a mysterious little ball of light. The man in this scene has just heard about the kingdom, and received the ball of light, but immediately the devil uses a net to snatch it away from the bewildered-looking man.

I have used my drawing of the devil, which I drew in Matthew 04 – The temptation of Jesus, although in this version I have drawn him with giant bat-like wings, to make him seem more menacing!