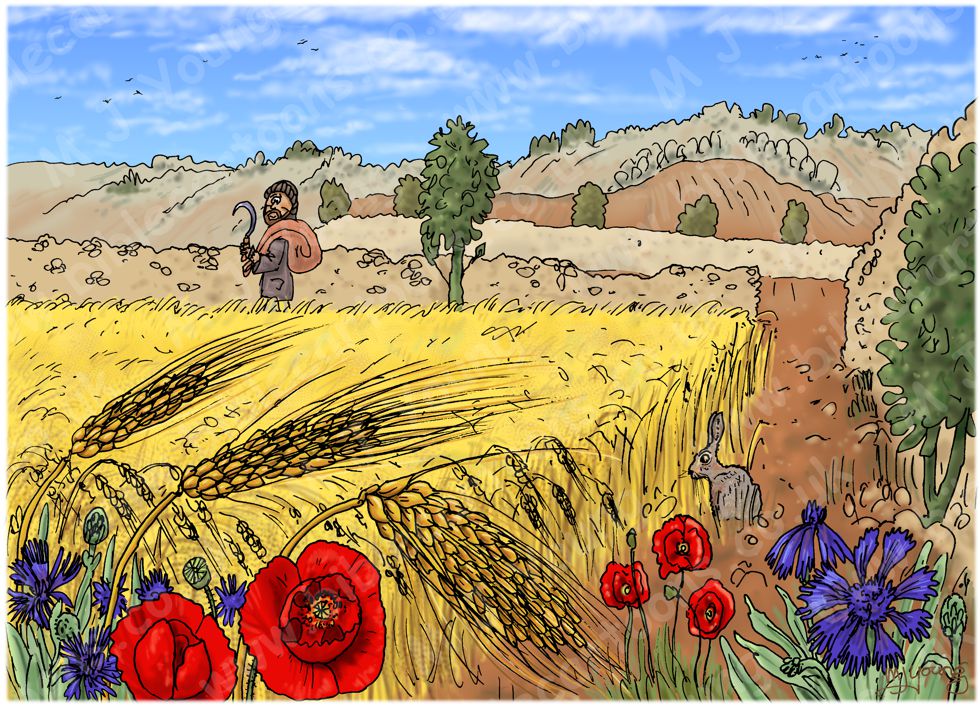 Matthew 13:8-9 (NLT)
8 [Jesus continue telling his parable] “Still other seeds fell on fertile soil, and they produced a crop that was thirty, sixty, and even a hundred times as much as had been planted! 9 Anyone with ears to hear should listen and understand.”

TIME OF DAY:
Unspecified in Bible. I have set the scene in the mid morning.

LIGHTING NOTES:
Gentle morning sunshine illuminates this scene from above.

CHARACTERS PRESENT:
The farmer we saw in previous scenes is walking along the field margin, preparing to harvest his barley crop.

RESEARCH/ADDITIONAL NOTES:
I decided I would draw Barley as the crop in this scene. Along with wheat, it was the main crop Biblical Israelites grew. I liked using the warm yellow orange colours for the crops in this scene, complemented by the bright red poppies & contrasting with the blue Syrian Cornflower-thistles.

If you look carefully you will see that 3 heads of Barley stand out in the foreground of the picture, representing the phrase Jesus uses, “they produced a crop that was thirty, sixty, and even a hundred times as much as had been planted!” The left barley head represents thirty, the middle is sixty & the big, fat right hand one represents that “hundred times that which was planted” super crop!

I have chosen to brighten up this scene by including a blue flowered plant in the foreground, which is Centaurea cyanoides (aka Syrian Cornflower-thistle, Knapweed). This wild plant/weed flowers in March-May. This plant grows in the Mediterranean Woodlands and Shrublands, & Semi-steppe shrublands regions of Israel.

I selected these two flowering plants because their flowering season coincides with the Biblical harvest period of Barley, so all three plant species can & do appear together!

I have included a Lepus capensis (aka the Cape hare, Desert hare), which is native to Africa, Arabia & it’s distribution extends into India. This one is eating some of the farmer’s barley!

Agriculture, crops, farming, harvesting, and the Biblical calendar.
Farmers in Biblical Israel divided the year into seasons and named them according to the agricultural activities carried out at that time. Usually the seasons were defined empirically (i.e. by means of observation or experience rather than theory or pure logic) because it was difficult/impractical to define them according to a fixed calendar. There are a number of reasons for this…

01) Firstly, Israel has a multitude of significantly different climates and this affects the ripening times of the various crops. The variety of different ploughing, sowing, planting and harvesting times through the county, and through the year make it difficult to define a definite season for a particular agricultural activity.

02) Secondly, different varieties of the same crop have varied ripening times, so again, defining a definite harvest time (for example) is difficult with such crop ripening variation.

03) Thirdly, there may be annual climatic changes, which a particular region of the county may experience, which again might significantly affect agricultural practice and timings within the country.
In addition to these physical/meteorological/geographical factors, the availability or sparsity of the human and animal workforce should be added.

The qazir Season (The Grain Harvest Season)
Grain was the most important agricultural product in the ancient economy. The two main crops grown were Barley & Wheat. Typically the first month of the year (Nisan, (Mar/Apr)) included the beginning of the Barley harvest, with the second month (Iyyar (Apr/May)) defined as the completion of the Barley harvest.

Farmers cut their crops close to the grain head, which reduced the volume of wasted stalk (chaff to be winnowed), and also left the crop stalks for a farmer’s animals (typically sheep) to graze, after the harvest was collected in.