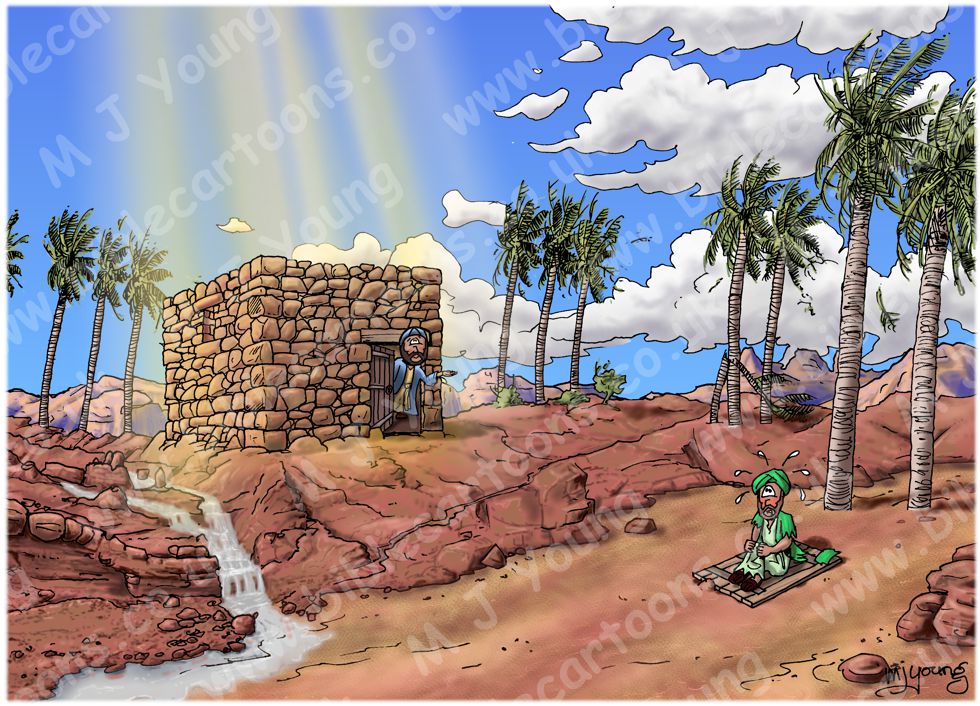 This is the sixth scene in this series of 6 that tells the parable (story) of the Wise & Foolish Builders.

I have added a heavenly glow over the Wise Builder & his house built on the rock. Sort of likle Godly approval I think!

Interpreting the metaphor
Remember, this is a metaphor which Jesus told his listeners. It isn’t really about building houses, rain & storms, etc, but rather about hearing Jesus’ words & putting them into practice. Jesus seems to be saying that troubles & adverse conditions will come upon us in this life, sooner or later. I think we can all agree that this is so. These adverse conditions are not likely to be actual rain storms & weather, thought that can happen too! More likely they might be redundancy, health issues, a lose of some sort, a death in the family, or some other circumstance that really challenge us & what we have put our faith in. It is at these times of trial & difficulty that we discover just what (or who) we have actually put our faith in.

The wise man or woman is the person who hears the words of Jesus’ & acts upon them. The foolish person is the one who hears the words alright, but does not put them into practice. When the trials & difficult times come (& sooner or later they will come) the foolish person will discover that they do not have the amazing resources of Jesus teaching to fall back on & support them during their trial.

Jesus teachings are brilliant – the whole Bible is full of God. And He wants us all to access his words & live our lives accordingly. That will not remove all the difficult times from our lives, but it will give us a resource to remain standing, even in the most trying of challenges, rather than folding up under the pressure of the trial & crumbling into nothing, like the Foolish Builders house did.

If we put our trust in Jesus & his words, then we are like the man who built on the rock. Jesus teachings are not just nice words, but vital to life. The Bible, God & Jesus are all referred to as the Rock, in the Bible itself.

I like the reference to God as Rock in Deuteronomy 32:3-4 (ANIV), which says, ‘I will proclaim the name of the Lord. Oh, praise the greatness of our God! He is the Rock, his works are perfect, and all his ways are just. A faithful God who does no wrong, upright and just is he.’

1 Peter 2:4-8 (ANIV) gives us the Apostle Peter’s Bible references to Jesus as the Rock & to Christians as living stones or rocks also: ‘As you come to him, the living Stone—rejected by men but chosen by God and precious to him— you also, like living stones, are being built into a spiritual house [the Church] to be a holy priesthood, offering spiritual sacrifices acceptable to God through Jesus Christ.
For in Scripture it says: “See, I lay a stone in Zion, a chosen and precious cornerstone, and the one who trusts in him will never be put to shame.” [Peter quoting the OT prophet Isaiah 28:16. Notice Peter says “him” not “it” in that sentence. He is clearly not referring to a place, but a person: Jesus the Christ.]

The quote goes on, ‘Now to you who believe, this stone is precious. But to those who do not believe, “The stone the builders rejected has become the capstone,” [Quoting Psalm 118:22.] and, “A stone that causes men to stumble and a rock that makes them fall.” [Quoting Isaiah 8:14.] They stumble because they disobey the message—which is also what they were destined for.’