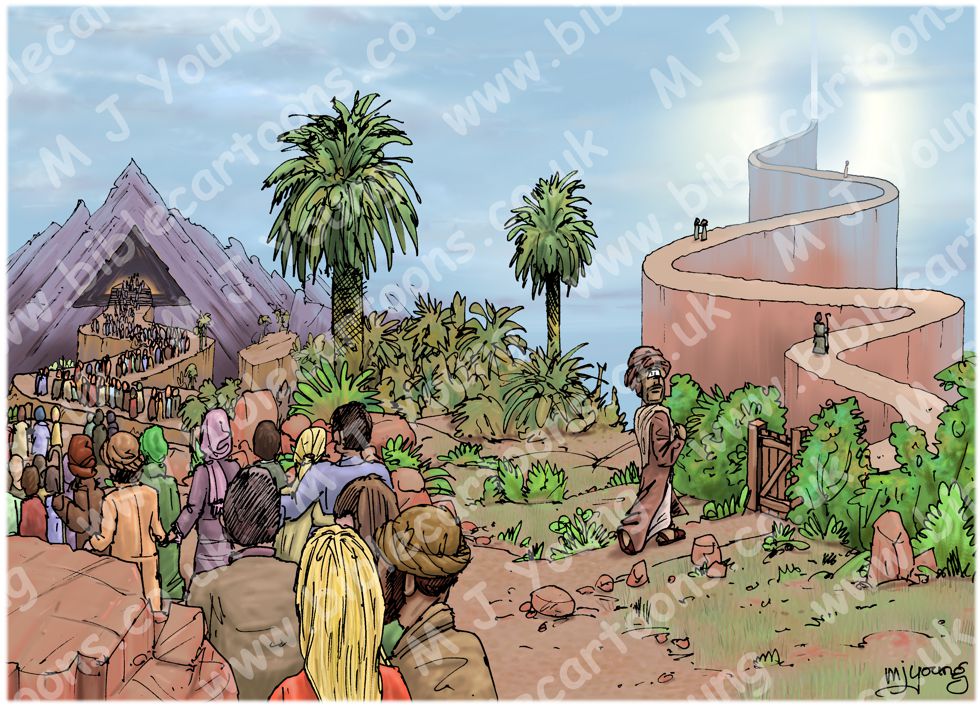 TIME OF DAY:
Unspecified in the Bible: daytime.

LIGHTING NOTES:
The light for this scene mainly comes from the right.

CHARACTERS PRESENT:
Various unnamed people, the vast majority walking towards the flame filled cave on the left. Five people walking up the winding path towards heaven, represented by the pale slit in the sky, atop the winding road.

There are two versions of this scene, the one above which just has the crowds of people in it & the next one (Note: NOT the picture below, but next in sequence) entitled “Matthew 07 – Narrow & wide road – Distractions” which has various additional items & objects included. See the next cartoon for the full details & description of that cartoon.

This scene was quite harrowing to produce, as I contemplated the final destination of all the people on the left of the picture: Hell. Verse 13 states that “many enter through it” – I have drawn the many.

“The few” are the five figures making their way up the curving pathway towards the light in the sky, which is representative of Heaven. 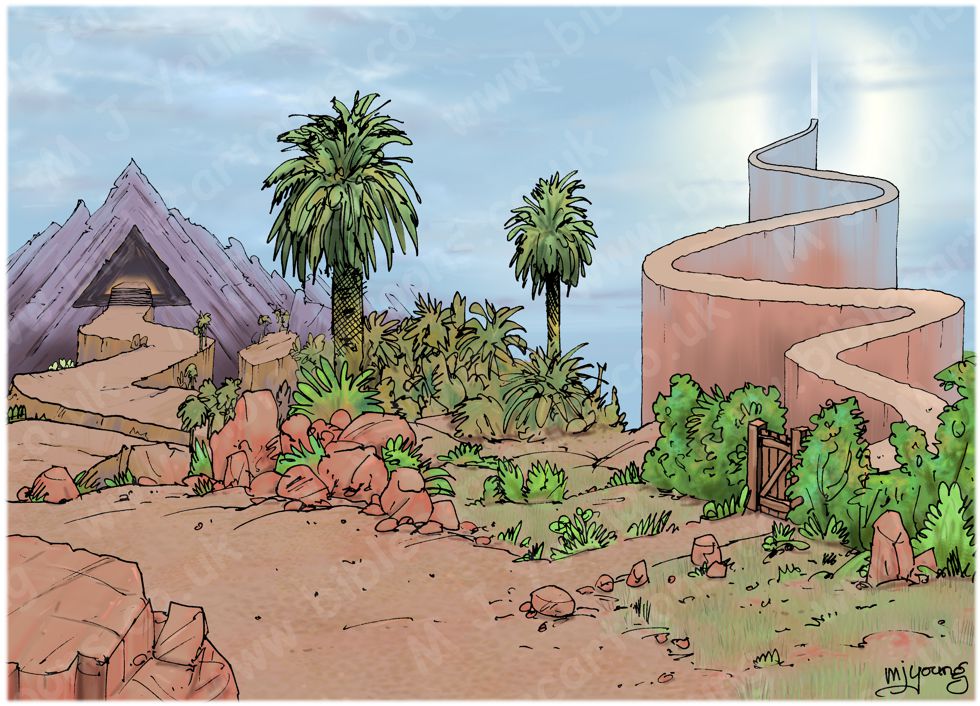 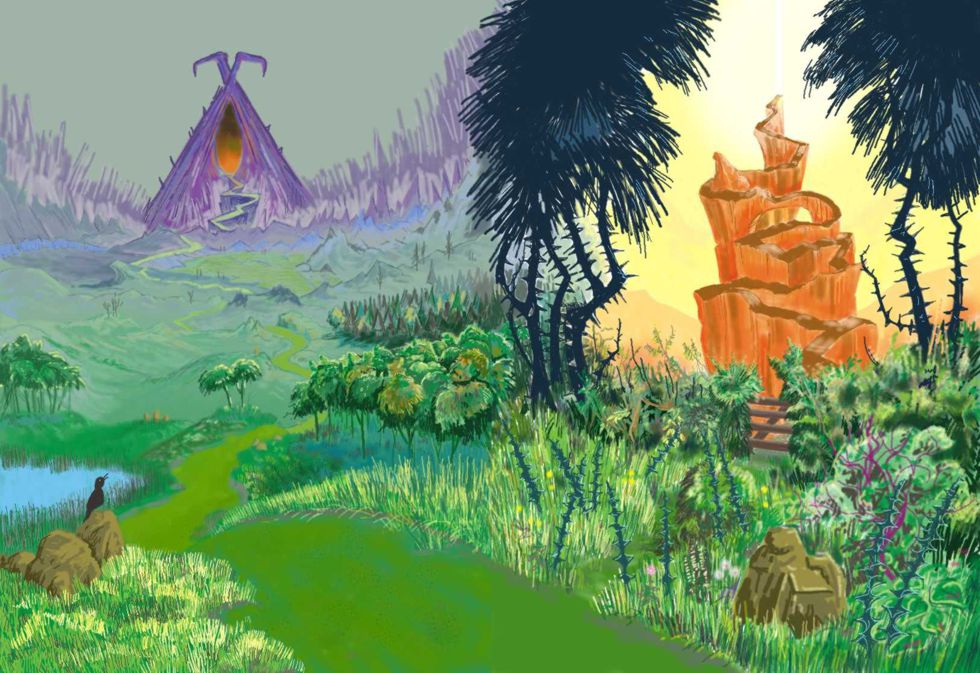 The picture above was an early version of this scene. I thought I’d show it here for comparison with the 2015 version.

The importance of the narrow gate & narrow pathway
The New Living Translation adds to the passage:

Matthew 7:13-14 (NLT)
“You can enter God’s Kingdom only through the narrow gate. The highway to hell is broad, and its gate is wide for the many who choose the easy way. But the gateway to life is small, and the road is narrow, and only a few ever find it.

Notice it states that “You can enter God’s Kingdom ONLY through the narrow gate.” There is no other way.

Everyone is presented with two ways, represented by two gates. One gate is narrow & the other one is wide. Jesus commanded those who would follow Him to enter God’s Kingdom only through the narrow gate. Although this gateway is small, and the road is narrow, that way, which is The Way of Jesus, alone leads to life: abundant like on earth & eternal life with God in heaven.

The danger & attraction of the wide gate, however, is its ease & the fact that so many other people are we upon it. When you see so many other folk you tend to think (even subconsciously) “this must be the right road then!” But how wrong you will be! The road to hell is broad and it is the easy way. There is plenty of room on that road for many people to wander in and continue wandering along, in whatever direction they wish. That road leads inevitably to hell.

It is interesting to note that the gate leading to life is small. Is that because it is so difficult to become a Christian? No, it’s not that, it is easy to become one: all you have to do is believe in your heart that God raised Jesus from the dead & confess with your lips that “Jesus is Lord” – See Romans 10:9-13 *1
So it’s not that the way of becoming a Christian is especially hard. It’s the path or the lifestyle that puts so many people off. There is only one way (the Gospel message: Jesus sacrificial death on the cross) and only a few decide to walk that road. Jesus’ death on the cross means that He takes our sin away from us, & imputes (puts into) His righteousness (right standing with God the Father) into us: thus cleaning our record. With a clean record of sin, we are then able to stand before the Father in heaven.

In Luke 13:24 *2 a similar story or metaphor is given, but here Jesus speaks of a narrow door, saying, “Make every effort to enter through the narrow door, because many, I tell you, will try to enter and will not be able to.”

In John 10:7,9 *3 Jesus explains twice that He is the gate. Take note of verse 9, “whoever enters through me WILL be saved.” That’s the same message the Apostle Paul gives in Romans 10:13 “For everyone who calls upon the name of the Lord [invoking Him as Lord] WILL be saved.”

The Jews expect to be able to enter into the Kingdom of God because of their history & belonging to that holy nation. Many non-Jewish people might also expect to be admitted to heaven, for some other reason. But the Bible makes it abundantly clear: no-one gains entry to heaven based on nation position, political persuasion, wealth, or any other personal attribute, save one: simple response of faith in Jesus as your personal saviour.

Romans 10:11-12 states:
11 The Scripture says, No man who believes in Him [who adheres to, relies on, and trusts in Him] will [ever] be put to shame or be disappointed. 12 [No one] for there is no distinction between Jew and Greek (in other words any non-Jew). The same Lord is Lord over all [of us] and He generously bestows His riches upon ALL who call upon Him [in faith].

Once our earthly life is over there seems to be no way to gain entry to heaven. That would make sense of Jesus statement in Luke 13:24 *2 “Make every effort to enter through the narrow door, because many, I tell you, will try to enter and will not be able to.” There is an urgency of responding to the Gospel message now, while we are still able to. Don’t put off to tomorrow such an important decision.

*1
Romans 10:9-13 (AMP)
9 Because if you acknowledge and confess with your lips that Jesus is Lord and in your heart believe (adhere to, trust in, and rely on the truth) that God raised Him from the dead, you will be saved.
10 For with the heart a person believes (adheres to, trusts in, and relies on Christ) and so is justified (declared righteous, acceptable to God), and with the mouth he confesses (declares openly and speaks out freely his faith) and confirms [his] salvation.
11 The Scripture says, No man who believes in Him [who adheres to, relies on, and trusts in Him] will [ever] be put to shame or be disappointed.
12 [No one] for there is no distinction between Jew and Greek. The same Lord is Lord over all [of us] and He generously bestows His riches upon all who call upon Him [in faith].
13 For everyone who calls upon the name of the Lord [invoking Him as Lord] will be saved.

*2
Luke 13:22-30 (ANIV)
22 Then Jesus went through the towns and villages, teaching as he made his way to Jerusalem.
23 Someone asked him, “Lord, are only a few people going to be saved?” He said to them,
24 “Make every effort to enter through the narrow door, because many, I tell you, will try to enter and will not be able to.
25 Once the owner of the house gets up and closes the door, you will stand outside knocking and pleading, ‘Sir, open the door for us.’ “But he will answer, ‘I don’t know you or where you come from.’
26 “Then you will say, ‘We ate and drank with you, and you taught in our streets.’
27 “But he will reply, ‘I don’t know you or where you come from. Away from me, all you evildoers!’
28 “There will be weeping there, and gnashing of teeth, when you see Abraham, Isaac and Jacob and all the prophets in the kingdom of God, but you yourselves thrown out.
29 People will come from east and west and north and south, and will take their places at the feast in the kingdom of God.
30 Indeed there are those who are last who will be first, and first who will be last.”

*3
John 10:7-10 (ANIV)
7 Therefore Jesus said again, “I tell you the truth, I am the gate for the sheep.
8 All who ever came before me were thieves and robbers, but the sheep did not listen to them.
9 I am the gate; whoever enters through me will be saved. He will come in and go out, and find pasture.
10 The thief comes only to steal and kill and destroy; I have come that they may have life, and have it to the full.