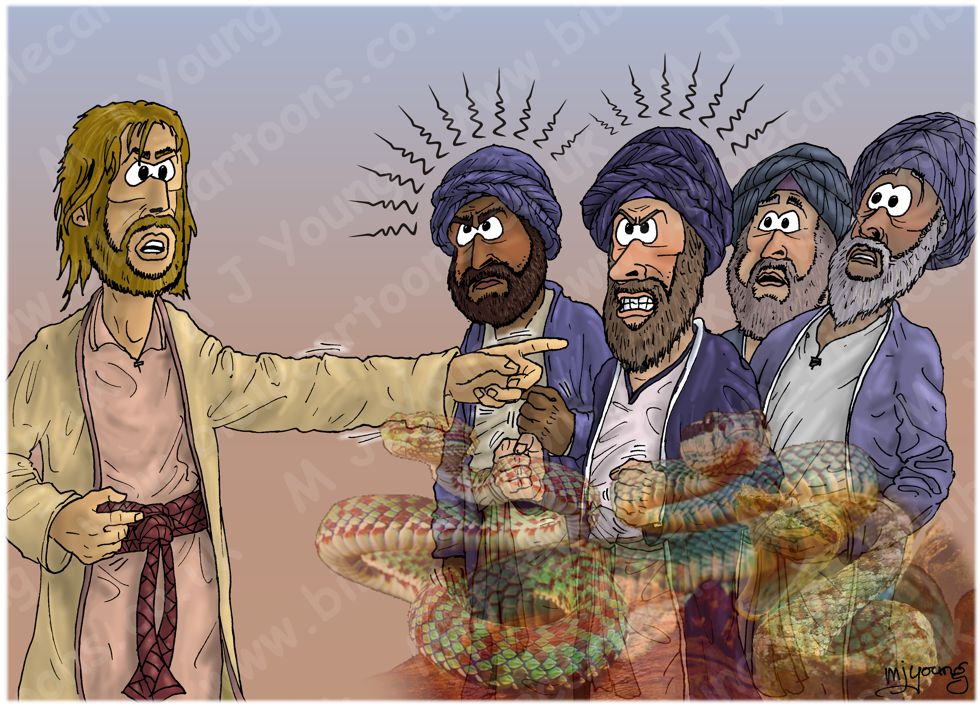 Matthew 3:7-10 (NLT)
7 But when he saw many Pharisees and Sadducees coming to watch him baptize, [1] he denounced them. “You brood of snakes!” he exclaimed. “Who warned you to flee God’s coming wrath? 8 Prove by the way you live that you have repented of your sins and turned to God. 9 Don’t just say to each other, ‘We’re safe, for we are descendants of Abraham.’ That means nothing, for I tell you, God can create children of Abraham from these very stones. 10 Even now the ax of God’s judgment is poised, ready to sever the roots of the trees. Yes, every tree that does not produce good fruit will be chopped down and thrown into the fire.

LIGHTING NOTES:
Simple lighting from the sun, on the right, illuminates this scene.

CHARACTERS PRESENT:
John the Baptist on the left, a group of 4 Pharisees on the right.

RESEARCH/ADDITIONAL NOTES:
This scene illustrates John the Baptist strong condemnation of the Pharisees as a group of vipers. I decided to include some translucent viper snakes in the foreground, to emphasise his point! In the translation (NLT) above they are called a “brood of snakes”, whilst in other translations of the Bible they are called a “brood of vipers”. Viper snakes were/are common in Israel & the Middle East.

In Luke 14 we read one of Jesus’ parables, which shows why those originally invited to the banquet won’t get in. The invited guests all make excuses why they can’t attend the party & so are excluded, in the end, by the Party-giver. I think this is a parallel, or explanation of why so many Hebrew people (the original party guests) where to be excluded from the party – they made too many excuses why they could not attend. If this is so, then it might explain why Jesus & John the Baptist tended to denounce the Pharisees and Sadducees, who were prime examples of Hebrew people who didn’t want to accept the Party-givers invitation! I’m sure there are lots of other examples & explanations regarding this animosity.
The full parable (from Luke’s Gospel) is seen below:

Luke 14:15-24 (NLT)
15 Hearing this, a man sitting at the table with Jesus exclaimed, “What a blessing it will be to attend a banquet [2] in the Kingdom of God!”
16 Jesus replied with this story: “A man prepared a great feast and sent out many invitations. 17 When the banquet was ready, he sent his servant to tell the guests, ‘Come, the banquet is ready.’ 18 But they all began making excuses. One said, ‘I have just bought a field and must inspect it. Please excuse me.’ 19 Another said, ‘I have just bought five pairs of oxen, and I want to try them out. Please excuse me.’ 20 Another said, ‘I now have a wife, so I can’t come.’
21 “The servant returned and told his master what they had said. His master was furious and said, ‘Go quickly into the streets and alleys of the town and invite the poor, the crippled, the blind, and the lame.’ 22 After the servant had done this, he reported, ‘There is still room for more.’ 23 So his master said, ‘Go out into the country lanes and behind the hedges and urge anyone you find to come, so that the house will be full. 24 For none of those I first invited will get even the smallest taste of my banquet.’”