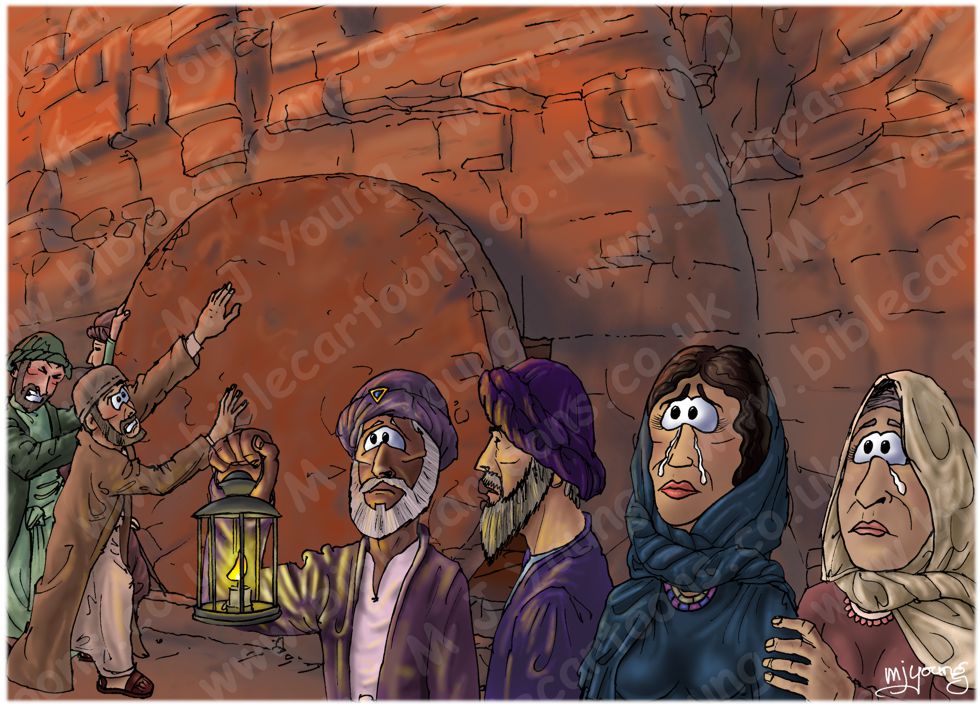 Mark 15:46c-47 (NLT) [Joseph [from Arimathea] bought a long sheet of linen cloth, and taking Jesus’ body down from the cross, he wrapped it in the cloth and laid it in a tomb that had been carved out of the rock.] 46c Then he rolled a stone in front of the entrance. 47 Mary Magdalene and Mary the mother of Joseph saw where Jesus’ body was laid.

TIME OF DAY:
We know from verse 42 that “evening approached”. According to Jewish time keeping, the Sabbath started at 6pm, when all work was not allowed, hence the urgency to get Jesus body into a tomb. I have set this scene at about 5:45pm.

LIGHTING NOTES:
The setting sun (unseen, on the left) is bathing this scene in red/orange light. I have increased the blue shadows in this scene, compared with Mark 15 – Burial of Jesus – Scene 03 – Into the tomb (Sunset version), thus representing the darkening light of the approaching evening.

Joseph from Arimathea is carrying a candle lantern, which also provides a yellow light; it can be seen reflecting off various characters present in this scene.

This is the last scene in the Mark 15 – Burial of Jesus series. I have just completed it on 30th April 2015 – only 4 days away from Good Friday!

The colours for the background, & the design of the cliff come from a previous scene: Mark 15 – Burial of Jesus – Scene 03 – Into the tomb (Sunset version). The characters present have also been included in previous scenes in this Easter series, which increases the sense of continuity across the scenes.

How large was the stone rolled across the entrance to the tomb?
Some Bible versions translate “a stone” (eg New Living Translation, NIV, King James Version, Revised Standard Edition, et all)

Mark 15:46 (AMP)
46 And Joseph bought a [fine] linen cloth [for swathing dead bodies], and, taking Him down from the cross, he rolled Him up in the [fine] linen cloth and placed Him in a tomb which had been hewn out of a rock. Then he rolled a [very large] stone against the door of the tomb.

From Mark chapter 15 it seems that the stone that covered the tomb was both large enough to cover the tomb’s entrance, but was notable for it’s very great size.

“For it was very great—This clause should be read immediately after the third verse, according to D, three copies of the Itala, Syriac, Hier., and Eusebius. “Who shall roll us away the stone from the door of the sepulchre? for it was very great. And when they looked, they saw that the stone was rolled away.” They knew that the stone was too heavy for them to roll away; and, unless they got access to the body, they could not apply the aromatics which they had brought to finish the embalming.”
[Source: Adam Clarke, A Commentary and Critical Notes.
Bold emphasis added by MY]