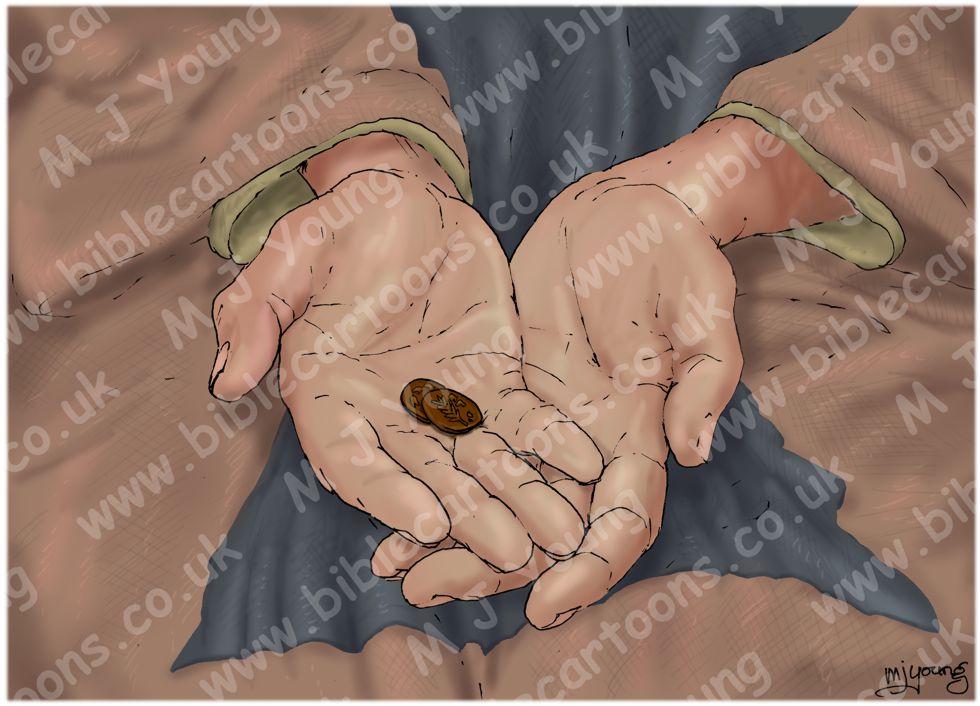 Mark 12:43-44 (NLT)
43 Jesus called his disciples to him and said, “I tell you the truth, this poor widow has given more than all the others who are making contributions. 44 For they gave a tiny part of their surplus, but she, poor as she is, has given everything she had to live on.”

LIGHTING NOTES:
This lighting for this scene is diffused, general daylight, from above.

RESEARCH/ADDITIONAL NOTES:
This scene is a close-up of the widow’s hands holding her 2 small coins. I have added some cross hatching in the shadows & highlights, to suggest the weave of the fabric in the widow’s clothing.

This is an unusual scene; I don’t often draw close-ups, but it seemed appropriate as Jesus brought his disciple’s ( & our) attention to the widow’s gift. Although small in monetary value, it was great it the eye’s of God.

In contrast with many wealthy people who gave large amounts, this widow gave two coins, called “lepta” in Greek. A lepton was the smallest bronze Jewish coin in circulation at the time. Two lepta were worth 1/64 of a Roman denarius. A denarius was a day’s wage for a labourer.

Jesus’ assessment of the amount was based on his knowledge of the woman: Jesus said that she had given more… than all the others, since he knew that they gave out of their material wealth (at little cost to them), but the widow gave all she had, out of her poverty. In that way she actually had given the most, i.e. all she had to live on. She could have kept back one coin for herself, but instead gave all she had to God. In giving to God sacrificially she completely entrusted herself to His mercy & provision. Jesus used her example to teach his disciples the value God places on complete trust & wholehearted commitment.