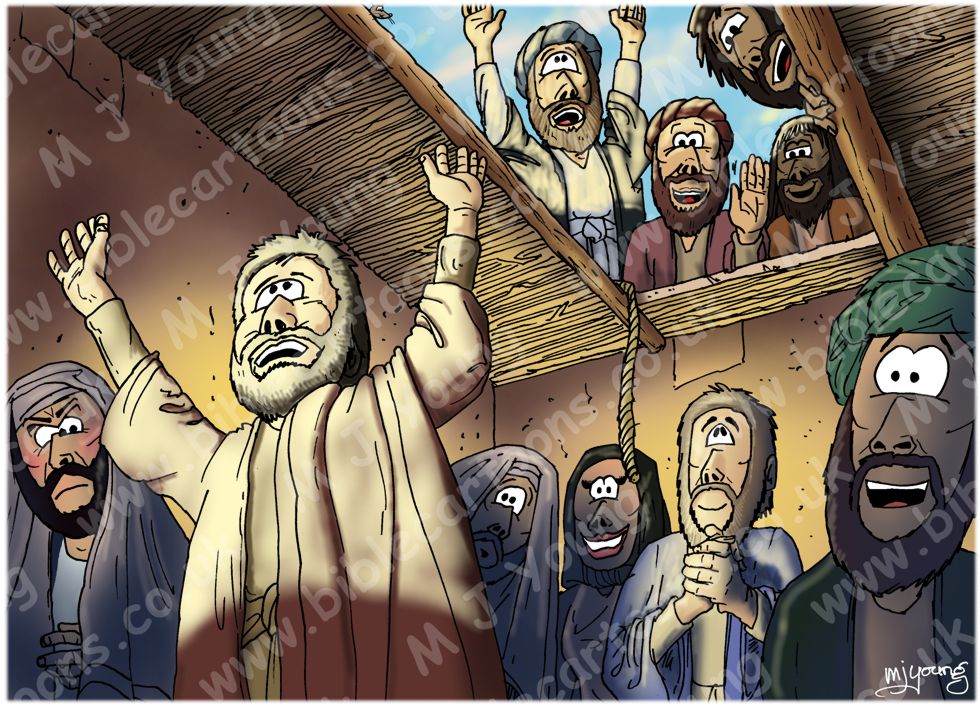 Mark 2:12 (NLT)
The man jumped up, took the mat, and pushed his way through the stunned onlookers. Then they all praised God. “We’ve never seen anything like this before!” they exclaimed.

LIGHTING NOTES:
Strong sunlight comes from the door, which is off to the left & behind the viewer, in this scene. This light is flooding the healed paralytic man, who is standing with his arms upraised, in praise of God. The light is also falling behind him, on other figures, including Jesus, who is the figure in the blue outer robe.

Additional light is provided by the oil lamps, behind the figures which produce a yellow/orange glow.

CHARACTERS PRESENT:
The paralysed man, now healed, is standing with his hands in the air in the centre left of the scene.
To the left of the man is an angry looking teacher of religious law – cross because he considers what Jesus said (in previous scene) as being blasphemous.

Behind the now healed man we see another teacher of religious law (looking surprised or confused!), a happy woman & Jesus (in blue outer robe) who has his eyes closed & is praying thanks to God the Father.

We can see the paralysed man’s four friends, still up on the rooftop, cheering & praising God for the man’s healing.

The mouse is putting in an appearance again, at the top left of the scene!

RESEARCH/ADDITIONAL NOTES:
Centre stage belongs to the paralysed man, who has just been healed by Jesus. He is amazed & delighted, of course, & spontaneously praises God with his hands in the air.

I was keen in this scene to convey the faith of Jesus & his serene, prayerful expression, as he thanks God the Father in heaven for this healing.

I have used the strong sunlight, coming in through the door (unseen, the left & behind the viewer) & deep shadows to highlight the drama of this miraculous healing of Jesus.