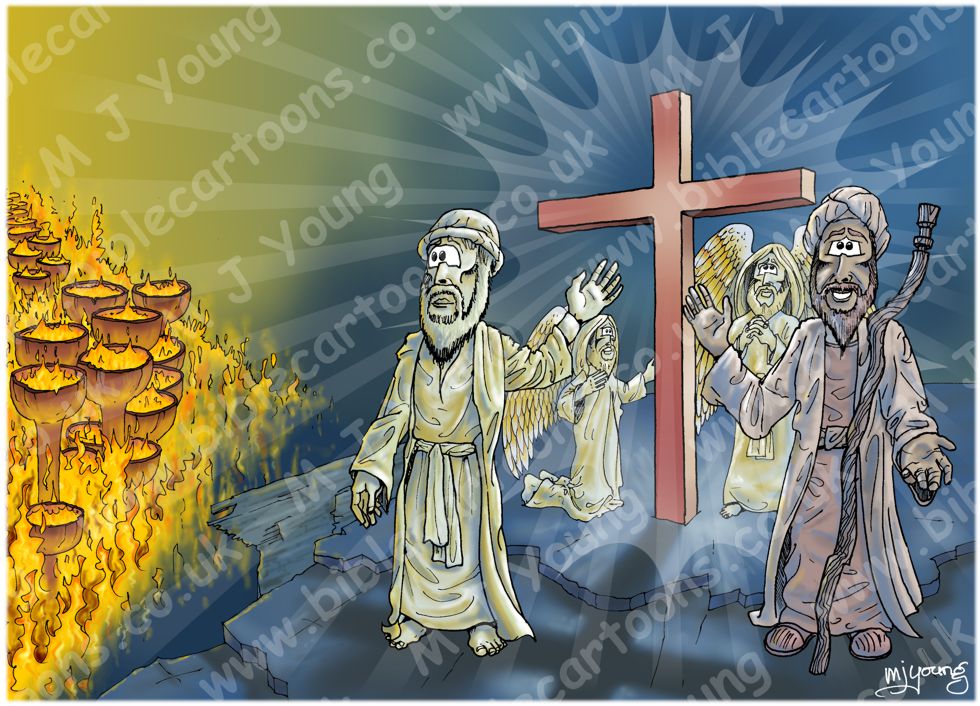 LIGHTING NOTES:
The bright light from heaven provides top lighting from above this scene, with the cross of Jesus providing additional white light rays. The secondary source of yellow/orange lighting comes from the flames of hell, the glow of which can just be seen on the edges of the cliff like chasm rocks & foreground figures of Lazarus & Abraham.
I have added radiating light rays & a comic-book-like “zap” coming from a point at the centre of the cross, which represents the dazzling brightness of, & centrality of, the cross of Jesus.
In one of the previous scenes (Luke 16 – Rich man & Lazarus – Scene 05 – Great chasm) we only saw the cast shadow of the cross, without the cross itself. In this last scene in the series I was keen to show the shadow’s source: the cross of Jesus.

CHARACTERS PRESENT:
From left to right, the soul/spirit of Lazarus, looking towards the Rich man in hell, with his left arm gesturing back towards the cross of Jesus. Next there are 2 angels, one kneeling, the other standing, at the foot of the cross. Finally we see the soul/spirit of Abraham on the right of the scene, gesturing back to the cross & forward, towards the viewer. He has his staff resting against his outstretched shoulder.
The Rich man (in Hell) is unseen, off beyond the left hand edge of this scene.

RESEARCH/ADDITIONAL NOTES:
There are 2 versions of this scene:
1) The Colour version (see previous Bible Cartoon)
2) The Blue version
This Blue version has a subtle blue overlay on the rocks & figures in the foreground, which increases the shadows on the figures. There is also a white edge lighting on the figures, & on the foreground, which increases the contrast of the shadow of the cross. The white light comes from the cross of Jesus.

I copied the fire, flames, “cups”, glow & other elements from a previous scene in this series (Luke 16 – Rich man & Lazarus – Scene 05 – Great chasm) & cropped it, so that it would fit into the left hand side of this scene, which saved me some time as I didn’t have to re-draw & re-colour that part of the picture! Everything else in this scene is unique, although I used the same colour palette as in previous scenes in this series, which helps to maintain the continuity between the scenes.

…And what about YOU?!
I decided to have Abraham looking at the viewer, with his right arm gesturing towards the cross of Jesus. I don’t often have characters in my cartoon illustrations looking out at the viewer! Abraham’s left arm & hand is lifted towards the viewer. My intention was to include the viewer in the story at this point; as if Abraham were saying “And what about YOU? Will YOU believe in Jesus & the cross, like Lazarus did, & so be saved; coming after your physical death into Heaven to be with God? Or will you reject Jesus like the Rich man did & end up in Hell, separated from God for all eternity?”