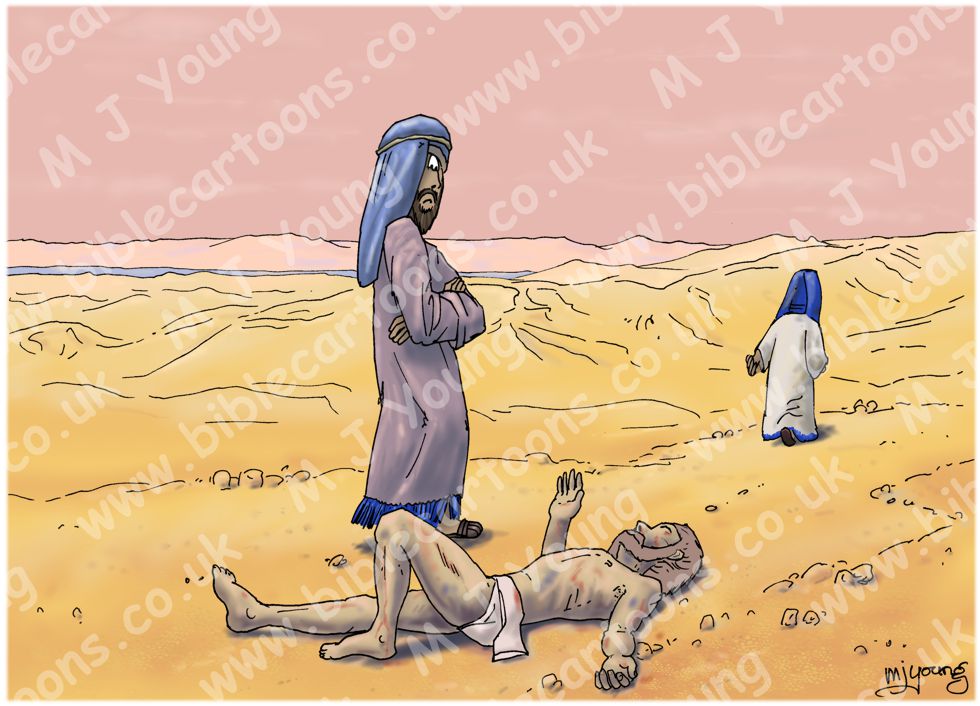 Luke 10:31-32 (NLT)
31 [Jesus continued] “By chance a priest came along. But when he saw the man lying there, he crossed to the other side of the road and passed him by. 32 A Temple assistant [1] walked over and looked at him lying there, but he also passed by on the other side.”

CHARACTERS PRESENT:
The Hebrew victim lying on the road, with a priest walking by in the distance, & a temple assistant (Levite) peering at the man on the road.

RESEARCH/ADDITIONAL NOTES:
There are two versions of this scene:
01) (Previous page) Luke 10 – Parable of the good Samaritan SET01 – Scene 02 – Passers-by.
The original drawing, which has rather grey/brown tones.

In SET 02, I actually finished scene 03 – Good Samaritan SET02 in 2015 first, before I finished the other scenes. Scene 03 was a special commission for a local primary school, so it was needed first. I have just completed colouring up the other 4 scenes in this set, & made available on the BC website.

The primary school wanted 4 large canvases with my illustrations on, each highlighting one of four values of the school. Apparently the canvases have been well received & are helping to illustrate the Christian ethos of the school.

A note on the seeming callousness of the priest & Levite!
The story Jesus relates has two men (a priest & a temple assistant or Levite) walk up, look at this poor, hapless victim of robbery, & then carry on down the road. That sounds shocking & rather unkind to our western ears. I suspect it was meant to elicit that same response from Jesus’ listeners! It is interesting to note though, that according to Mosaic law (the law of God, given to Moses) a Hebrew person would be defiled by touching a dead body; Numbers 19:11 states that “Whoever touches a human corpse will be unclean for seven days”. Perhaps the priest & Levite didn’t want to risk becoming “unclean” & therefore unable to perform their priestly duties.

Even if that were the main reason for these men’s actions, I suspect Jesus would have wanted them to help the poor man on the ground! In the story it falls to a Samaritan to help him, which would have been a shock for Jesus’ listeners, as Jews & Samaritans tended to hate & despise one another!