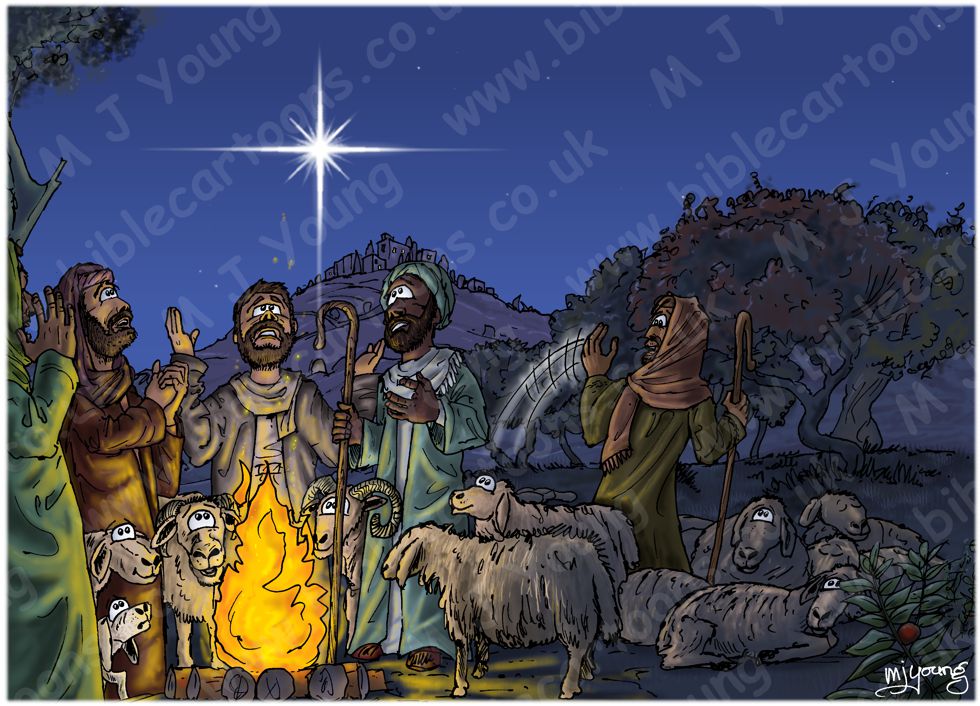 Luke 2:15 (NLT)
When the angels had returned to heaven, the shepherds said to each other, “Come on, let’s go to Bethlehem! Let’s see this wonderful thing that has happened, which the Lord has told us about.”

LIGHTING NOTES:
The stars in the sky & particularly the bright one over the cave near Bethlehem provides the cool blue light of this scene. In contrast to that is the warm yellow/red glow of the shepherd’s camp fire. You can see highlights of that warm glow on the figures, sheep, trees & surrounding ground.

RESEARCH/ADDITIONAL NOTES:
This scene is similar to a previous one (Luke 02 – Nativity SET02 – Scene 03 – Shepherds) in that it deliberately contains similar background, mid ground & fore ground elements. I have changed the “camera position” so to speak, in effect “panning the camera to the right”. You may notice that the hill on which Bethlehem is located has apparently shifted to the left, as have the stars. There is less of the ancient oak tree to be seen behind the shepherds (only a small section of one of the upper branches) & there is less of the foreground bushes to be seen in this view as well.

I have copied & pasted the stars from a previous scene (Luke 02 – Nativity SET02 – Scene 03 – Shepherds) so that they match up to the same arrangement & positions in this one.

The colours used also come from the previous scene (Luke 02 – Nativity SET02 – Scene 03 – Shepherds), to maintain continuity between them.