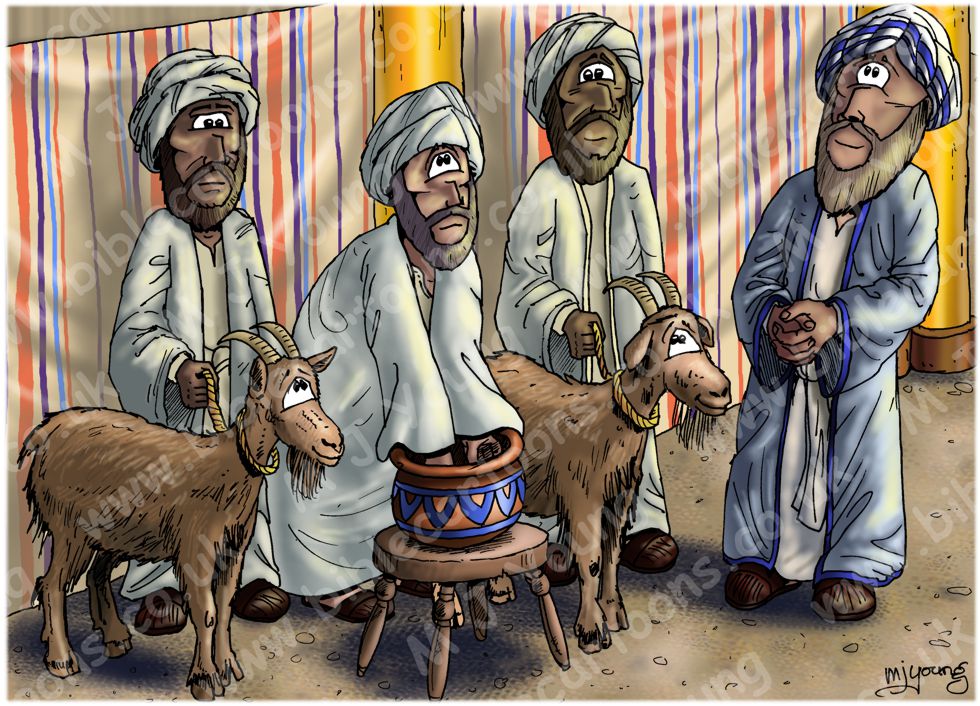 Leviticus 16:7-10 (NLT)
7 [The Lord continued saying to Moses] “Then he [Aaron] must take the two male goats and present them to the Lord at the entrance of the Tabernacle. [1] 8 He is to cast sacred lots to determine which goat will be reserved as an offering to the Lord and which will carry the sins of the people to the wilderness of Azazel. 9 Aaron will then present as a sin offering the goat chosen by lot for the Lord. 10 The other goat, the scapegoat chosen by lot to be sent away, will be kept alive, standing before the Lord. When it is sent away to Azazel in the wilderness, the people will be purified and made right with the Lord.” [2]

[2]
Or, wilderness, it will make atonement for the people.

TIME OF DAY:
I have set this scene in the early morning.

LIGHTING NOTES:
The sun shines low in the sky, from the right.

CHARACTERS PRESENT:
Moses is on the right, with Aaron in the centre, with his hands in the pot. Aaron is flanked by two Levites, holding the two goats.

RESEARCH/ADDITIONAL NOTES:
I referred frequently to Exodus 26 & 27, in order to try to imagine what the Tabernacle looked like. I hope i have rendered verse 1 correctly, which reads, “Make the tabernacle with ten curtains of finely twisted linen and blue, purple and scarlet yarn, with cherubim worked into them by a skilled craftsman.”

Purpose of the sacrifices.
Many other cultures of the ancient Near East have rituals or ceremonies designed to dispose of ritual or demonic evil, while in Israel all of the sins of the people were included.
The ceremony begins with purification offerings so that the High priest is able to enter the Holy Place, without incurring the Godly penalty of death. Once the High priest gains access to the Holy Place, the ritual of sprinkling blood cleanses all parts of the sanctuary from the impurities accumulated throughout the past year. Eventually all the sins of the entire Hebrew nation are placed on the head of the scapegoat, which is then let loose & carries them away into the wilderness.

A note on the difference between the garments Aaron wore on days of celebration & on this, The Day of Atonement.
Verse 4 tells us that Aaron (the brother of Moses) was to wear, “the holy linen coat, and shall have the linen breeches on his body, be girded with the linen girdle, and wear the linen turban; these are the holy garments. He shall bathe his body in water, and then put them on.” These were simple Levitical garments, not the glorious ones Aaron wore during celebrations. The various garments that marked him as the High Priest of the Hebrew people included the robe, the ephod, the breastplate, the mitre, etc. These garments were splendid to behold. However, the purpose of the ceremony in Leviticus 16 (The Day of Atonement) is one of sacrifice for sins rather than celebration & therefore Aaron was not to be adorned in gold & finery, but rather in these simple Levitical garments.

Verse 7 tells us that this ceremony occurred “at the door of the tent of meeting.” I have taken this to mean Aaron was stationed inside the outer courtyard of the whole Tabernacle structure, but outside the door to the inner tent, in which the Ark of the Covenant was placed & of which he was told in verse 2, ‘…not to come at all times into the holy place within the veil, before the mercy seat which is upon the ark…”’

Adam Clarke’s “A Commentary and Critical Notes” has some interesting points about the casting of lots in Hebrew tradition:
‘The Jews inform us that there were two lots made either of wood, stone, or any kind of metal. On one was written ‏לשם‎ LASHSHEM, for the NAME, i. e., ‏יהוה‎ JEHOVAH, which the Jews will neither write nor pronounce: on the other was written ‏לעזאזל‎ LAAZAZEL, for the SCAPE-GOAT: then they put the two lots into a vessel which was called ‏קלפי‎ kalpey, the goats standing with their faces towards the west. Then the priest came, and the goats stood before him, one on the right hand and the other on the left; the kalpey* was then shaken, and the priest put in both his hands and brought out a lot in each: that which was in his right hand he laid on the goat that was on his right, and that in his left hand he laid on the goat that was on his left; and according to what was written on the lots, the scape-goat and the goat for sacrifice were ascertained.’

*In my cartoon illustration you can see this ‘kalpey’ is a brown pottery vessel, with a blue design running round the base.

What happened to the scapegoat?
Leviticus 16:20-22 (NLT) tells us specifically what was to be done to the scapegoat…
20 “When Aaron has finished purifying the Most Holy Place and the Tabernacle and the altar, he must present the live goat. 21 He will lay both of his hands on the goat’s head and confess over it all the wickedness, rebellion, and sins of the people of Israel. In this way, he will transfer the people’s sins to the head of the goat. Then a man specially chosen for the task will drive the goat into the wilderness. 22 As the goat goes into the wilderness, it will carry all the people’s sins upon itself into a desolate land…”

I wonder what happened to the scapegoat. Did it live out its full lifespan in the wilderness, or did the (very real) sins of the Hebrew nation cause it to die shortly after being let loose into the wild? It is known that worry, anger & other mental states can cause actual bodily illness in us human beings. Sin also causes physical, mental & spiritual weakness & illness to come upon a person. Bearing that in mind I wonder if the goat, with all that sin placed upon it died quite quickly out in the wilderness.

We see in the scripture above that the scapegoat’s purpose was to carry away into the wilderness the sins of the whole Hebrew nation. It was a substitute for the people who had committed those sins. In the New Testament we see Jesus the Christ becoming the ultimate scapegoat: carrying all of our sins upon his body on the cross. In this way we can see the various rituals & ceremonies of the Old Testament as a foretaste of the perfect sacrifice made by Jesus, the ‘once-for-all’ atonement for all of our sins.


Bible Doctrine Notes
16:6-34 SALVATION, Atonement (4.23A)
The Hebrew people were commanded by God to set aside one day a year as the Day of Atonement (Hebrew Yom Kippurim “the day of coverings”; 23:28, 25:9), which was the single most important day in the Hebrew calendar. This was the only time in a whole year when the high priest could go into the Most Holy Place in the tabernacle (and later in history, in the temple) and make atonement for his own sins, those of his household and for the whole nation of Israel. The regulations that God established in dealing with this personal and national sin shows that it is God who takes the initiative in dealing with the wrongdoing that has the power to separate Him from His people.

View all Bible Cartoons in Leviticus Go to Search by Bible Book page Do I need High or Medium qlty cartoons? FAQ’s