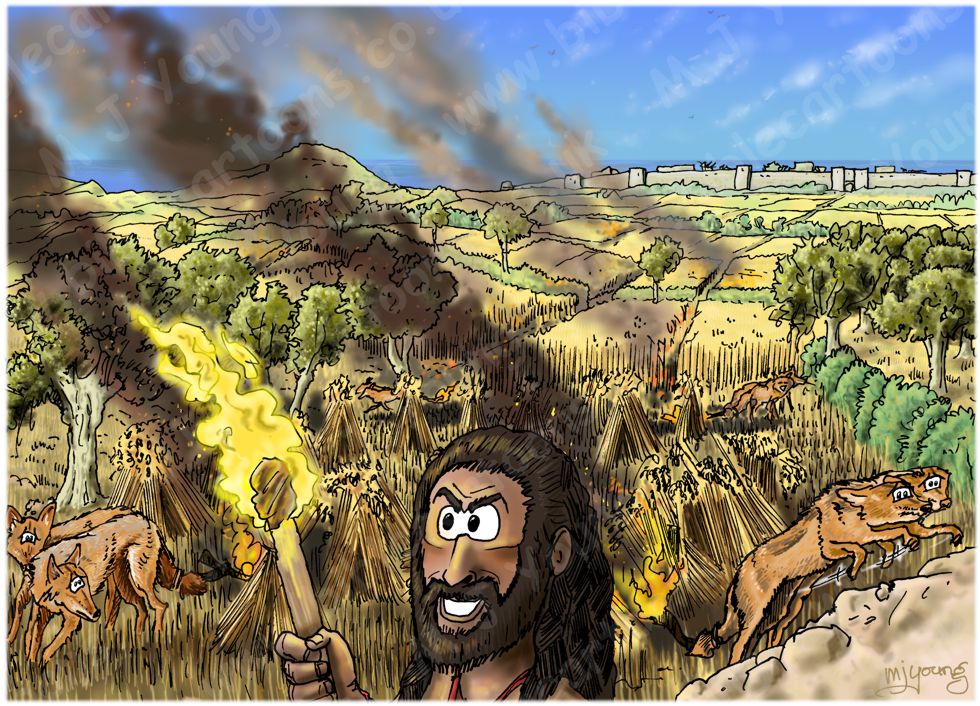 Judges 15:3-5 (ANIV)
3 Samson said to them, “This time I have a right to get even with the Philistines; I will really harm them.” 4 So he went out and caught three hundred foxes and tied them tail to tail in pairs. He then fastened a torch to every pair of tails, 5 lit the torches and let the foxes loose in the standing corn of the Philistines. He burned up the shocks and standing corn, together with the vineyards and olive groves.

TIME OF DAY:
The Bible doesn’t specify the time of day. I’ve set this scene in the early morning.

LIGHTING NOTES:
There is sunlight used in this scene, coming from above and left, casting shadows to the right of people and objects.

RESEARCH/ADDITIONAL NOTES:
There are two versions of this scene:
01) (This page) Judges 15 – Samson’s revenge – Scene 02 – Fire foxes (Dark smoke version). In which the smoke from the field fires are deeper and darker.

02) (Next page) Judges 15 – Samson’s revenge – Scene 02 – Fire foxes (Pale smoke version). In this version I have made the smoke from the field fires much paler.

In case you are wondering what the scene looks like without the figure of Samson in the foreground, or the smoke, here it is: 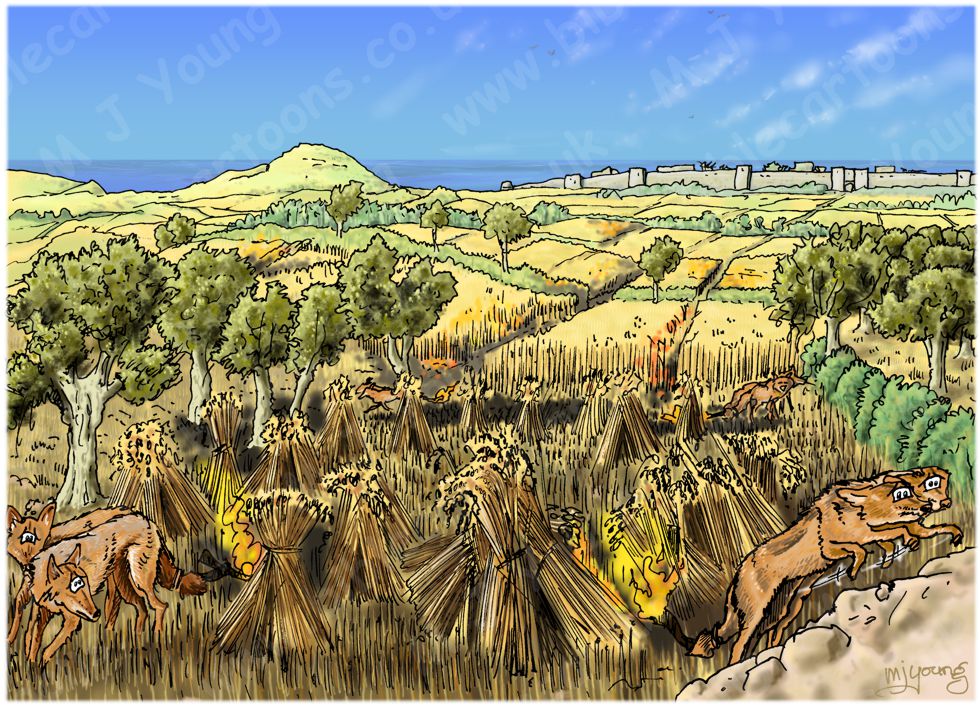 In Israel, in Biblical times, the grain harvest (barley and wheat) usually occurred in April and/or May.

On the left and right hand sides of the scene you can also see Olive groves.

I enjoyed colouring up this scene, although it was quite a challenge to make the wheat sheaves (the bundles of stalks in the foreground) stand out against the stubble beneath them. I introduced deeper shadows into the stubble and that helped a lot. I also didn’t want the fire and smoke to over complicate the scene and make it too “busy”. I decided to make the Pale smoke version available, just in case it is!

Notice the walled Philistine city in the distance, by the sea shore. That’s the Mediterranean Sea behind the city, stretching off to the horizon.

Foxes or Jackels?
How many pairs of Golden Jackels can you spot?
There are 5 pairs, but the last ones are in the middle distance, below the distant hill, and are only colour smudges, and look like flames, so you may not be able to identify them at all!

Although the Bible translates the animals in this scene as “foxes”, some commentators believe the word Hebrew “shualim” could be translated as jackel. As Adam Clarke’s Commentary observes: “There has been much controversy concerning the meaning of the term shualim, some supposing it to mean foxes or jackals, and others handfuls or sheaves of corn.”
I have decided to illustrate the Golden Jackel in my cartoon, as the small wild animal that was used by Samson to punish the Philistines.

“The golden jackal (Canis aureus) is a wolf-like canid that is native to Southeast Europe, Southwest Asia, South Asia, and regions of Southeast Asia. Compared with the Arabian wolf, which is the smallest of the gray wolves (Canis lupus), the jackal is smaller and possesses shorter legs, a shorter tail, a more elongated torso, a less-prominent forehead, and a narrower and more pointed muzzle. The golden jackal’s coat can vary in color from a pale creamy yellow in summer to a dark tawny beige in winter. It is listed as Least Concern on the IUCN Red List due to its widespread distribution and high density in areas with plenty of available food and optimum shelter.”
[Source: https://en.wikipedia.org/wiki/Golden_jackal]

“The Golden jackal has long, pointed ears and long hair. The coat of the animal is rather coarse and not very long. The tail is fluffy and long. Being the largest species of jackal, this animal, however, has lighter tread, shorter tail, more slender build and a narrower, more pointed muzzle, compared to other jackal species. The coloration of their fur depends on the season of year and region, varying from yellow to pale gold with a brown tip.

These jackals are widely distributed from North and East Africa to southeastern Europe and South Asia, including Burma. Their preferred habitat is steppe terrains, short and arid grasslands as well as dry, open country.

Living nearby human settlements, Golden jackals are strictly nocturnal. However, those living in other areas can be partly diurnal. The main social unit of these animals is a mated pair as well as a family, consisting of a mated pair and its young. Living in pairs, the jackals share most of their activity with the partners. Their behavior is strictly synchronized: they forage, hunt and rest together. As a matter of fact, hunting in pairs, they are three times more successful, than hunting alone. Jackal families hunt on a territory of about 2-3 sq. km. all year round. Looking for shelter, they frequently use caverns, dug by other animals. Golden jackals can also dig caverns themselves as well as use crevices in rocks. They are very friendly to their partners. Scratching one another all over their bodies is a common activity between mates. Nevertheless, once strange jackals encounter each other, their behavior shows subordination, domination and even readiness to attack.”
[Source: http://animalia.bio/golden-jackal]