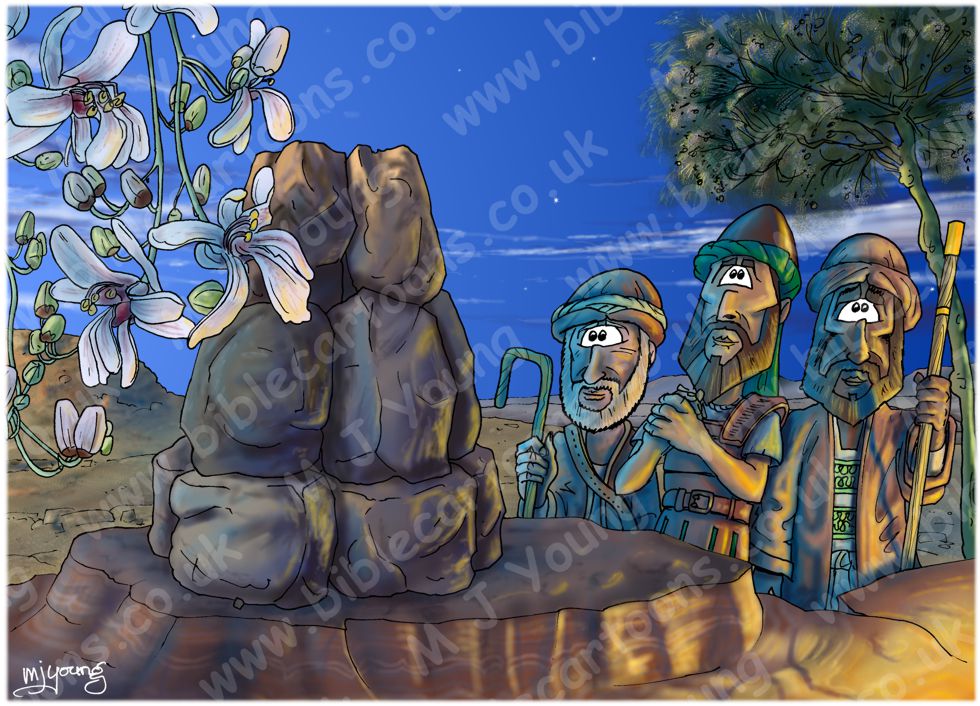 Joshua 4:9 (ANIV)
Joshua set up the twelve stones that had been [1] in the middle of the Jordan at the spot where the priests who carried the ark of the covenant had stood. And they are there to this day.

LIGHTING NOTES:
There are two sources of light in this scene, the setting sun (out of view on the left) & a campfire (out of view on the bottom right). The setting sun produces a weak red glow which can just be seen on the distant mountains & more clearly on the hill in the middle distance, on the extreme left of the picture.
Note also the sunlight catching the top of the foreground 12 stone rock monument & the top of the tree on the right.

The second source of light is the campfire, which is off to the bottom right. It’s warm yellow hues can clearly be seen on the figures & rocks in the foreground. It can also be subtly seen reflected off the flowers in the top left, & the tree trunk on the right.

Contrasting the sun’s red glow & the warm yellows of the campfire, I have used blue hues which represent the oncoming cool night time. The cool blues can be seen on the left hand side of the figures, & rocks & plants in this scene. I am very pleased with the dramatic, strong contrast between the cool blues & warm yellow tones of the campfire.

CHARACTERS PRESENT:
Three Hebrew leaders: Joshua (son of Nun) is in the middle, with two unnamed men flanking him. I have clothed Joshua in the same garb (battle dress) that he was illustrated in for the Fall of Jericho series (drawn in 2011).

The two unnamed men are two of those chosen to select & carry the 12 rocks from the middle of the river Jordan. The man on the left is the man in orange/brown clothes seen in the right foreground of a previous scene in this series (see Joshua 03 – Jordan crossing – Scene 02 – 12 men) whilst the man on the right is the one standing at the back of that scene (third from the left, on the back row), wearing brown with a green & fawn inner robe. He also appears picking up a rock in the previous scene (see Joshua 03 – Jordan crossing – Scene 06 – 12 stones lifted).

RESEARCH/ADDITIONAL NOTES:
There are two versions of this scene, the Colour version (previous in series) & the Blue version (this one).
I am very pleased with this picture, particularly the cool blue & warm yellow colour contrasts. The sky, with it’s layers of cloud & few early evening stars has come out very well.

I have illustrated Joshua with his hands together in a gesture of praying & praising God.

The tree is Moringa peregrina (aka Ben tree, wispy-needled yasar tree, wild drum-stick tree). You can see a close-up of its buds & small white & pink flowers in the top left.

When was the invasion of the Promised land?
Apparently there is some question about when exactly the Hebrew people went into the Promised land. Some scholars suggest 1400 BC, some 1380 BC, 1230 BC or 1200 BC. There seems to be much debate about the time, but general agreement that it occurred in the late Bronze age.

… If the biblical narratives are accepted as reliable sources and the Biblical chronology followed, the Exodus, as already noted, must be placed around 1441 BC and the fall of Jericho around 1401 BC…

… On the question of the twin problems of the date of the Exodus and the conquest of Canaan the conservative student is warranted in moving very slowly before abandoning the date of c. 1441 BC for the Exodus and 1401 BC for the Conquest in favor of a period a century and a half or more later under the plea that archeological evidence demands it. Of greater importance is the reading given in scripture.”
[Source: http://www.theology.edu/conquest.htm]

What time of year was the invasion of the Promised land?
This would appear to be a rather simpler question to answer! Joshua chapter 2, verse 6 tells us that Rahab hid the two Hebrew spies who went to Jericho, on her roof, under the stalks of flax she had lain out. After flax stalks were pulled up at harvest time, they were soaked in water for three or four weeks to separate the fibres. After drying out in the hot desert sun, the flax was woven into linen cloth. Therefore we know that the two spies entered Jericho just after the flax harvest, which was/is usually about half way through April & into the middle of May. This assumes that the climate (& therefore the harvest time) has not radically altered in the intervening 3,400 years.

An article I read on the internet confirms this spring time for the destruction of Jericho & therefore the crossing of the Jordan that preceded it:

“Then there is the matter of the large grain supply found in the burnt debris of Jericho City IV. In fact, grain was the most abundant item found by professor Kenyon, apart from pottery. ‘In her limited excavation area, Professor Kenyon recovered six bushels of grain in one season!…unique in the annals of Palestinian archaeology’ wrote Dr Wood.

Successful attackers would normally remove valuable grain after capturing a city. However the Israelites by divine command, were forbidden to take any grain from Jericho (verses 17-18, 21). ‘This could explain why so much grain was left to burn when [Jericho] City IV met its end,’ wrote Dr Wood [1]. For this amount of grain to have been stored, the city would have to have been destroyed in the spring of the year, shortly ‘after harvest time, not before,’ Dr wood emphasises.”
[Source: http://dejnarde.ms11.net/jericho_israel.htm]

Time of year & flowers.
My desire is to keep my illustrations Biblically & historically accurate if at all possible. I wanted to illustrate a flowering plant in this scene, in order to add some close up interest. The significance of determining the time of year for the destruction of Jericho (see above), is that I was then able to select plant(s) which are also in flower at this time of year. I have elected to draw the flowers of the Moringa peregrina tree, having made sure that this particular plant does indeed flower in the spring, & that it lives in the arid, desert climatic region just north of the Dead Sea, near Jericho & Shittim.

“The seed of Moringa peregrina, which is contained in a pod or elongate capsule (12.5-15.3 × 2 inches (32–39 cm × 5 cm)) contains about 50% oil. A single tree may produce up to 1000 pods per year. The oil of Moringa peregrina is referred to as ‘ben oil’, from the high concentration of behenic acid contained in the oil and has a yellowish colour, a sweet taste and is odourless and does not easily become rancid, for which reason it is much esteemed in the East for making perfumes.”
[Source: http://www.flowersinisrael.com/Moringaperegrina_page.htm]