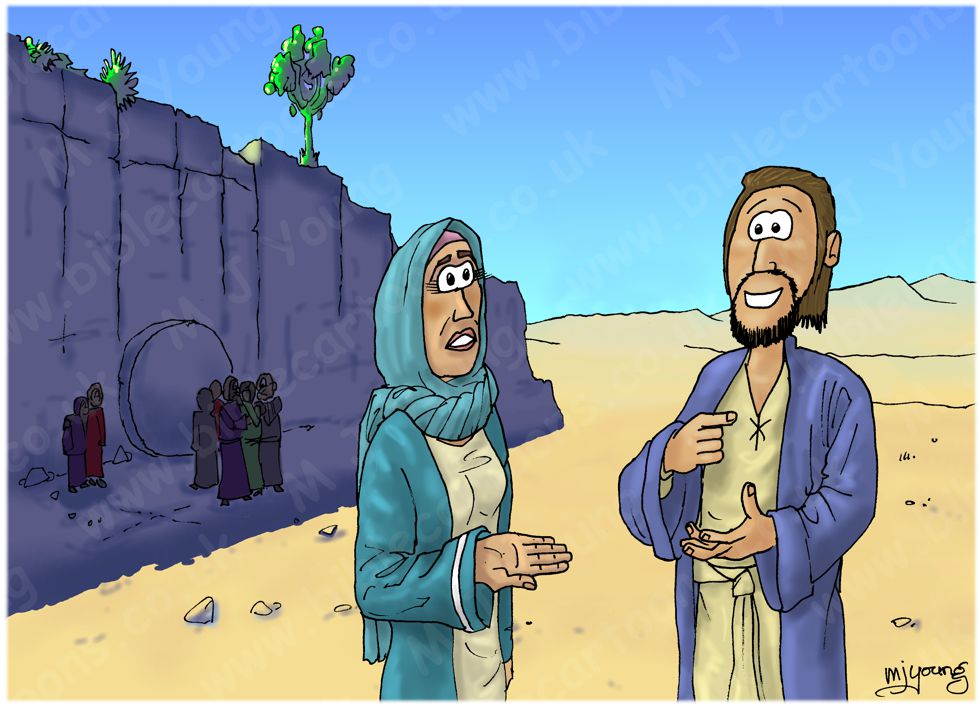 John 11:21-27 (ANIV)
21 “Lord,” Martha said to Jesus, “if you had been here, my brother would not have died. 22 But I know that even now God will give you whatever you ask.”
23 Jesus said to her, “Your brother will rise again.”
24 Martha answered, “I know he will rise again in the resurrection at the last day.”
25 Jesus said to her, “I am the resurrection and the life. He who believes in me will live, even though he dies; 26 and whoever lives and believes in me will never die. Do you believe this?”
27 “Yes, Lord,” she told him, “I believe that you are the Christ, [2] the Son of God, who was to come into the world.”

LIGHTING NOTES:
Strong sunlight from the left casts dark blue/purple shadows to the right of the figures and cliff wall, in which the tomb of Lazarus is cut.

CHARACTERS PRESENT:
Jesus talking to Martha (sister of Lazarus & Mary).
Various mourners at the tomb entrance, in the shadows to the left.

RESEARCH/ADDITIONAL NOTES:
This scene uses the same background as John 11 – Death of Lazarus – Scene 09 – Troubled in spirit (Version 01), and I have drawn Jesus as I used to depict him, in the early days of Bible Cartoons, to match those early designs.

This is the fifth of 7 famous statements that Jesus made, starting with “I am…”.

01. The Bread Of Life
Then Jesus declared, “I am the bread of life. He who comes to me will never go hungry, and he who believes in me will never be thirsty. (John 6:35)

02. The Light Of The World
When Jesus spoke again to the people, he said, “I am the light of the world. Whoever follows me will never walk in darkness, but will have the light of life.” (John 8:12)

What might Jesus have meant by referring to himself as the resurrection and the life?
This is the fifth of the seven “I am” statements that Jesus spoke (only recorded in John’s Gospel).

Point 01. Jesus knew that his friend Lazarus was ill, & that he would die. He also had in mind that through the power of the Holy Spirit Jesus would raise his friend from the dead. This is way he referred to Lazarus as being “asleep” (refer to also in 1 Thessalonians 4:13), even though Jesus knew that he would physically die. Jesus explained to His puzzled disciples that the sickness was “for God’s glory, that God’s Son may be glorified through it” (John 11:4).

Point 02. Outside the home of Lazarus & his 2 sisters Martha & Mary, near the village of Bethany, Jesus met Martha. “If you had been here,” Martha said, “my brother would not have died.” Clearly she had faith in the healing power of Jesus. Jesus reassured Martha that Lazarus would rise again. Martha responded again in faith: “I know he will rise again in the resurrection at the last day”, clearly Martha didn’t realise that Jesus had in mind to physically resurrect Lazarus in the present.

Point 04. Jesus was also making a statement concerning His divine nature. He is the source of life, and as such, death has no power over Him. Jesus confers this spiritual life on those who believe in Him, so that they share His triumph over death (see 1 John 5:11-12). Christian believers in Jesus Christ will experience resurrection because, having the life Jesus gives, it is impossible for death to defeat them (see 1 Corinthians 15:53-57).

Point 05. Outside the tomb of Lazarus, Jesus shows that neither time, nor death was an obstacle to Him. “Jesus called in a loud voice, ‘Lazarus, come forth!’ The dead man came out” (see John 11:43). Not only did Jesus claim he was the resurrection & the life, he PROVED it as well, by raising Lazarus, who had been dead for 4 days. Death has no dominion over Jesus who is Life itself, & by inference, nor does death have dominion over those who are in Him: Christian believers (see 1 Corinthians 15:54-55). Because Jesus lives, we live also. Because He is Life, we Christian believers have life eternally also.

Point 06. Jesus showed Martha (and us!) that the resurrection is in fact a Person. Martha thought victory over death was something that would only occur in the future; Jesus corrected her, showing (by raising Lazarus from the dead at the time) that victory was & is also a present reality.

After presenting Himself as the resurrection and the life, Jesus asks Martha an all-important question: “Do you believe this?” (see John 11:26), which is a question we all have to respond to.