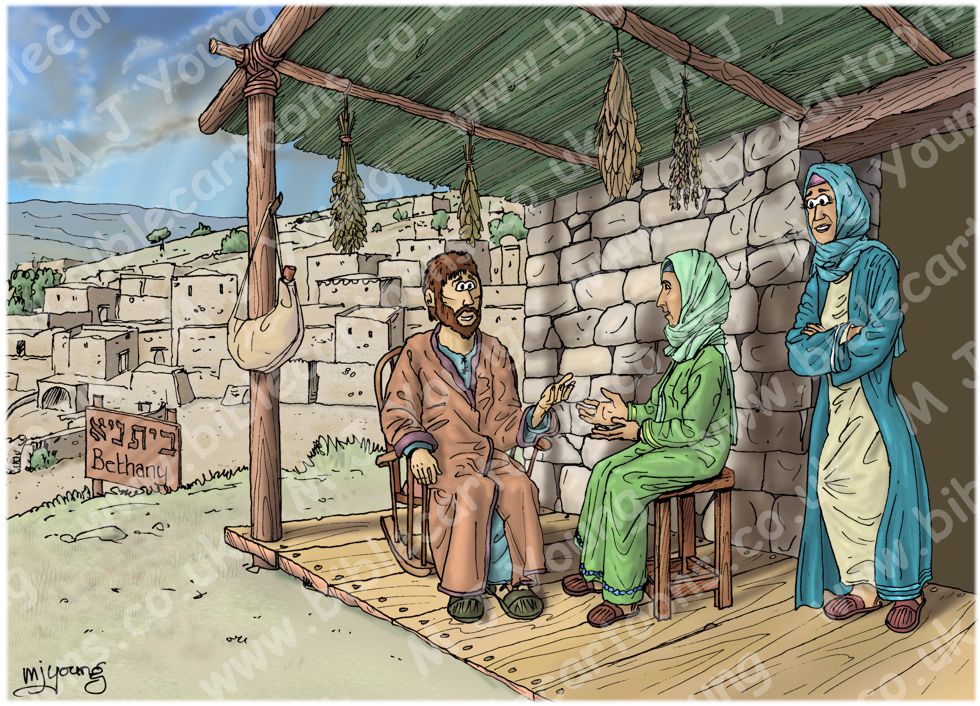 John 11:1 (ANIV)
Now a man named Lazarus was sick. He was from Bethany, the village of Mary and her sister Martha.

TIME OF DAY:
Not specified in Bible verse above, I have set the scene in the late afternoon.

LIGHTING NOTES:
I have set the on the left (west) casting shadows to the right of the figures & objects.
As it was winter/spring (see explanation below) I have made the sky cloudy & you can see rain falling in the distance.

RESEARCH/ADDITIONAL NOTES:
This is a commissioned piece in which I was asked to draw the three figures on their porch. I don’t know if Hebrew houses had porches, but I suppose they might have! As this scene was drawn for young children originally, I included a road sign with the word “Bethany” in English & Hebrew characters. I have removed the sign for the Bible Cartoon on this website.

The colours of the skin, hair & clothes of the three figures (Lazarus & his two sisters, Mary & Martha) were establish in Bible Cartoons I drew in March 2009 (e.g. John 12 – Jesus anointed at Bethany) I have used the same colours to maintain continuity. However, in the following scenes (e.g John 11 – Lazarus resurrected – Scene 01 – Jesus at the tomb & John 11 – Lazarus resurrected – Scene 04 – Lazarus raised) I have drawn Mary & Martha in dark mourning clothes, rather than their previously established, lighter clothing colours.

Where is Bethany?
Apparently the word Bethany means House of dates.

I’ve done a bit of research on the internet, & as far as I can make out, the village of Bethany was on the south eastern slopes of the Mount of Olives, so that the peak of that mount would obstruct a direct line-of-sight view from Bethany to the Temple of Jerusalem. I expect some peripheral buildings or a part of the walls of the city may have been visible though.

“A village on the south-eastern slope of the Mount of Olives (Mark 11:1), about 2 miles east of Jerusalem, on the road to Jericho. It derived its name from the number of palm-trees which grew there. It was the residence of Lazarus and his sisters. It is frequently mentioned in connection with memorable incidents in the life of our Lord (Mat 21:17; Mat 26:6; Mark 11:11, 12; Mark 14:3; Luke 24:50; John 11:1; John 12:1). It is now known by the name of el-Azariyeh, i.e., “place of Lazarus,” or simply Lazariyeh. Seen from a distance, the village has been described as “remarkably beautiful, the perfection of retirement and repose, of seclusion and lovely peace.” Now a mean village, containing about twenty families.”
[Source: Illustrated Bible Dictionary: And Treasury of Biblical History, Biography, Geography, Doctrine, and Literature.]

Bethany geology
I researched the geology of the Bethany area & found the village is built on the Mishash Formation which is 1 layer of the Mount Scopus Group, a “soft” chalk and marl sedimentary rock unit, with some chert (a flint-like substance) bed. For some more detailed geology, see footnote [3], which directes to the website “Answers in Genesis”.

In terms of my drawing, I have made the rocks pale yellow, pink, green or grey in colour, with pale yellow soil, all of which is my way of indicating the underlying limestone & chert beds, beneath the figures feet!

What time of year did the death & resurrection of Lazarus take place?
John 10:22-23 [1] speaks of the Festival of Dedication (of the Temple) which was usually on 19th or 20th December.

Therefore, the death & resurrection of Lazarus must have occurred some time between these two dates, in the winter or early spring of the year.

[a]
That is, Hanukkah, the Festival of Dedication of the Temple.

[2]
John 11:55 (ANIV)
55 When it was almost time for the Jewish Passover, many went up from the country to Jerusalem for their ceremonial cleansing before the Passover.

[3]
“The Mishash Formation lies conformably on the Menuha Formation, or unconformably on older beds. It is characterized by massive chert beds, accompanied by variable amounts of porcellanite, chalk, marl, claystone, fossiliferous and concretional limestone and phosphorite (Kolodny 1967). Two facies within the formation have been distinguished. The Haroz facies, in which the formation consists of flint only, is developed in part of the northern Negev. It passes laterally into the Ashosh facies in which the additional lithologies are prominent. To the west and northwest the Mishash Formation passes into a continuous chalky facies (Flexer 1968).”
[Source: https://answersingenesis.org/geology/geology-of-israel-in-biblical-framework-2-flood-rocks/]