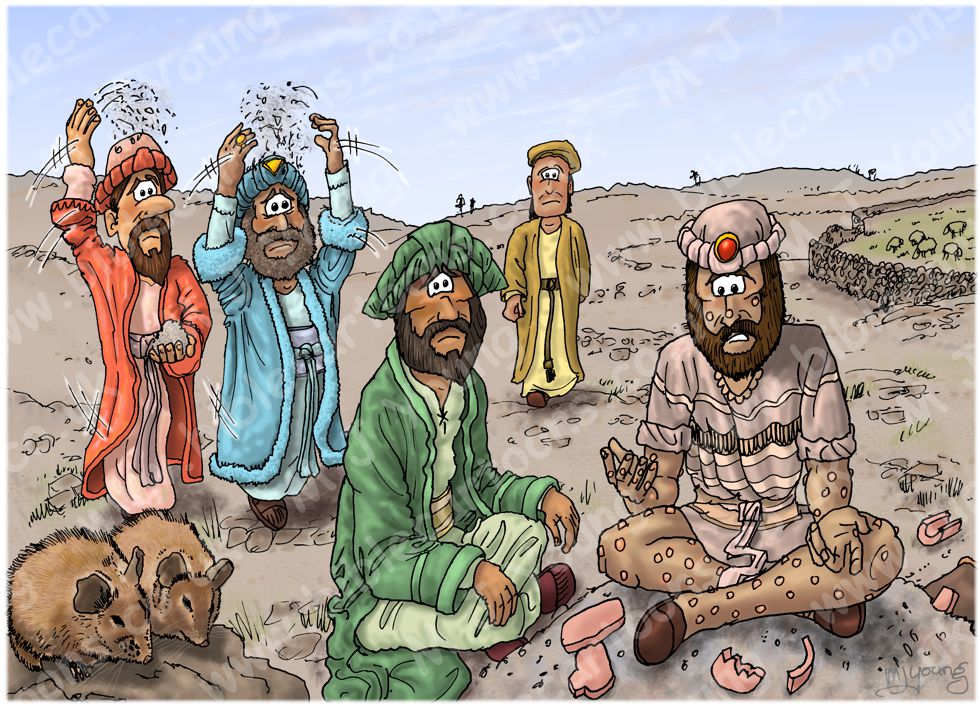 Job 2:11-13 (NLT)
Job’s Three Friends Share His Anguish
11 Three of Job’s friends were Eliphaz the Temanite, Bildad the Shuhite, and Zophar the Naamathite. When they heard of the tragedy he had suffered, they got together and traveled from their homes to comfort and console him. 12 When they saw Job from a distance, they scarcely recognized him. Wailing loudly, they tore their robes and threw dust into the air over their heads to demonstrate their grief. 13 Then they sat on the ground with him for seven days and nights. And no one said a word, for they saw that his suffering was too great for words.

TIME OF DAY:
Unspecified in Bible. I have set this scene in the late morning.

LIGHTING NOTES:
The sun is high overhead (on the left), casting shadowes to the right of figures & objects.

CHARACTERS PRESENT:
Job (sitting cross legged, on the right), Eliphaz the Temanite wearing green robes & is siting next to Job.
Bildad the Shuhite (wearing blue robes) & Zophar the Naamathite (wearing orange/red robes) are walking towards Job.
Elihu son of Barakel the Buzite, of the clan of Ram is walking towards Job & the others, wearing mustard yellow robes.
2 Golden Spiny Mice are asleep in the left foreground.

RESEARCH/ADDITIONAL NOTES:
Although Elihu son of Barakel is not mentioned until Job chp 32, I have assume that he accompanied Job’s three friends on their visit to Job, and so include him in scenes right from chp 2.

Notice that Bildad the Shuhite & Zophar the Naamathite are throwing dust over themselves as they walk towards Job, this apparently was a gesture that demonstrated their grief (see verse 12 above).

The ground colour is the same as in previous scenes, since this picture takes place in the same location.
The robe colours of Job’s 4 friends were established in 2010 when I drew the first scene for the book of Job, which was “Job 38 – Job and the whirlwind”. Whilst I still wanted to keep similar colours that I used all those years ago, I believe it was right to increase the richness of the costumes, since Job was a very rich man & I imagine his friends were too.

I thought it might be nice to include the 2 sleeping Golden Spiny Mice in the left foreground just for fun! They are native to the region were Job lived.

Hearing about Job’s disasters, three of his friends—Eliphaz, Bildad, and Zophar met together and visited Job. “Eliphaz” is an Edomite name (Gen. 36:4), and as a Temanite he was from either Teman in Edom, known for its wisdom (Jer. 49:7; Obad. 8), or Tema in Arabia.

“Bildad” is not used elsewhere in the Bible, and Shuhite may suggest a relationship to Shuah, Abraham’s youngest son by Keturah (Gen. 25:2).

The name “Zophar” is used only in Job, and his lineage as a Naamathite is unknown, though some have suggested that Naamah, a Canaanite town inherited by Judah (Josh. 15:41), was his hometown.

The golden spiny mouse (Acomys russatus) gets its name from the reddish-orange spiny fur that covers its body from head to tail. This coarse, inflexible fur is thought to protect it from predation. Aside from the golden fur that covers its head and upper parts, its flanks are yellow and its underside is pale. It has gray legs with pale feet and black soles. It is also described as having a small, but distinct white spot under each eye. It is often found in the wild missing a part or all of its tail because it is able to shed this as a defence mechanism. However, it is not known how this is done, how often it can occur, or under what conditions. It lives an average of three years in the wild. It is omnivorous and feeds on seeds, desert plants, snails, and insects. Living in desert regions, it is a xeric animal that obtains water from the plants that it eats and produces very concentrated urine in order to conserve water. A. russatus is naturally nocturnal.

The golden spiny mouse thrives in dry, hot deserts and is common in Egypt and much of the Middle East, including Jordan, Israel, Oman, Saudi Arabia, and Yemen. It is limited to these areas because its metabolic rate is much slower than predicted for an animal of its size,5 so it is unable to maintain a viable body temperature in colder environments where the temperature falls below 18 °C6 and can live in temperatures as high as 42.5 °C.

A. russatus is also very good at conserving the little water it gets from its diet of insects and plants. It does this by producing extremely concentrated urine with urea content up to 4800 mM and chloride concentration up to 1500 mM. This means that it could survive drinking sea water, which is very rare in mammals.
[Source: https://en.wikipedia.org/wiki/Golden_spiny_mouse]

Here is the background without the figures or mice. 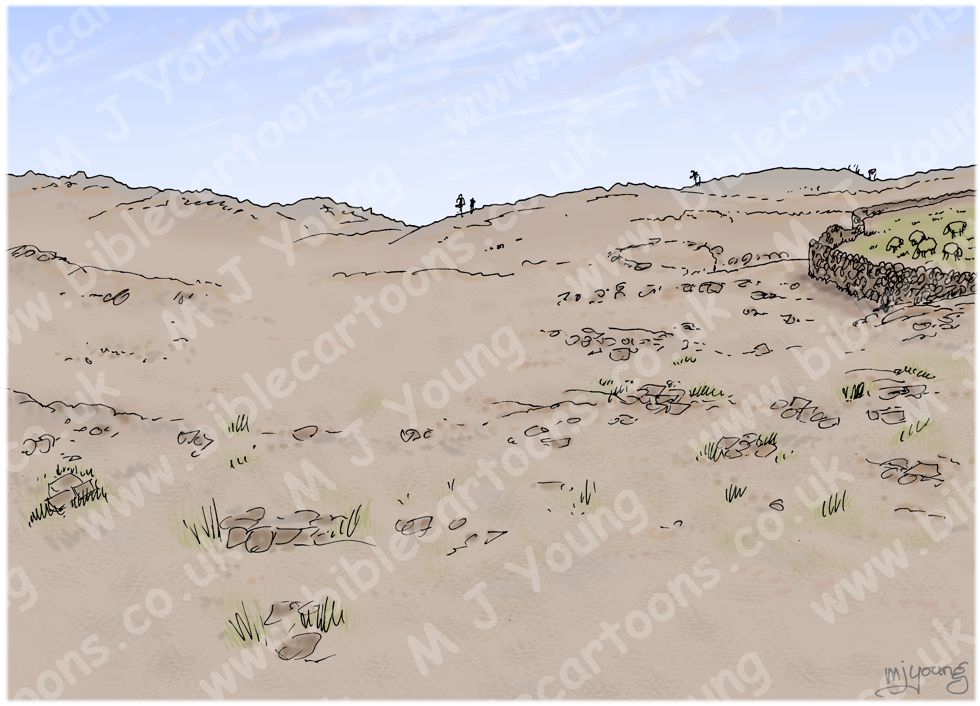 Here is the initial pencil sketch I drew of this scene. 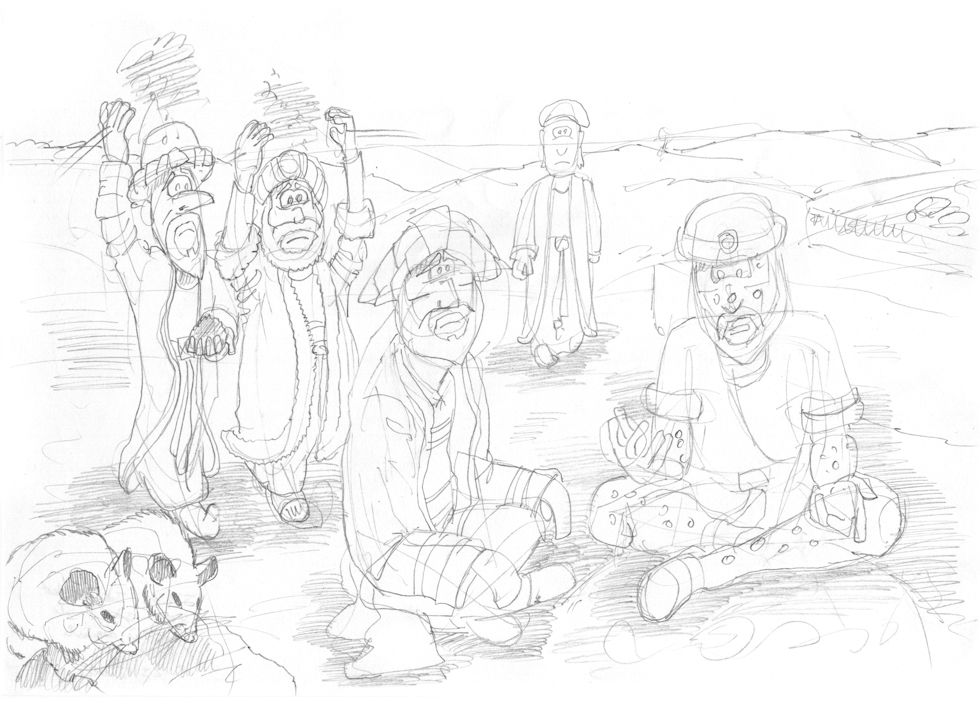