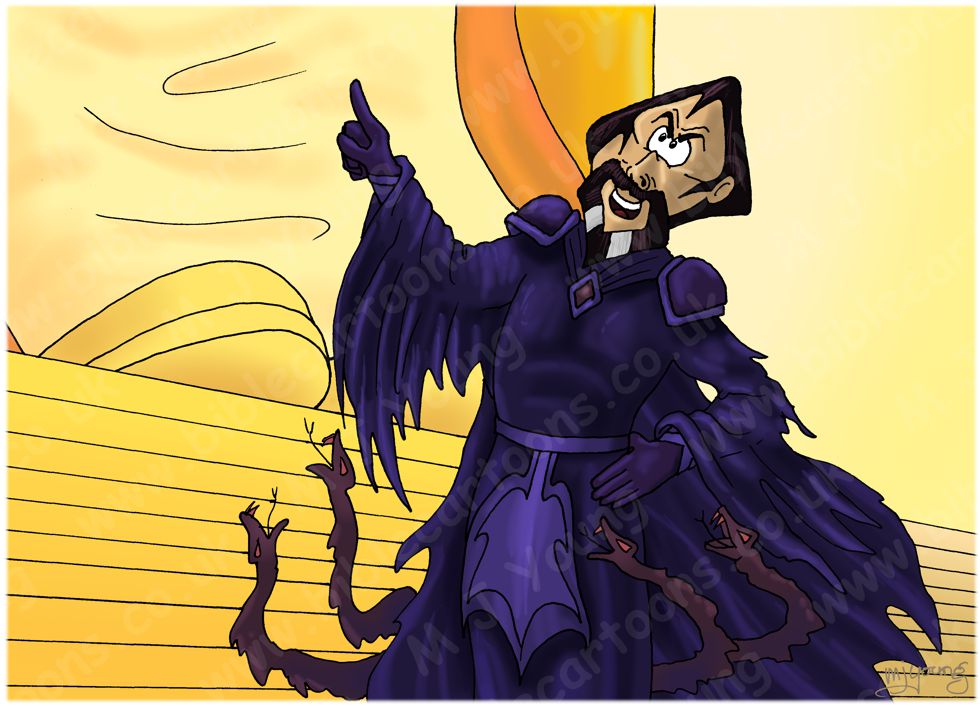 Job 2:1-6 (NLT)
Job’s Second Test
1 One day the angels [1] came again to present themselves before the LORD, and Satan the Accuser came with them. 2 “Where have you come from?” the LORD asked Satan.
And Satan answered the LORD, “I have been going back and forth across the earth, watching everything that’s going on.”

3 Then the LORD asked Satan, “Have you noticed my servant Job? He is the finest man in all the earth—a man of complete integrity. He fears God and will have nothing to do with evil. And he has maintained his integrity, even though you persuaded me to harm him without cause.”

4 Satan replied to the LORD, “Skin for skin—he blesses you only because you bless him. A man will give up everything he has to save his life. 5 But take away his health, and he will surely curse you to your face!”

6 “All right, do with him as you please,” the LORD said to Satan. “But spare his life.”

LIGHTING NOTES:
This scene takes place in heaven. The glory of the Lord God illuminates the scene with blinding brilliance.

CHARACTERS PRESENT:
The Lord God is sitting on a golden throne (we can only see his feet).
The Devil (Satan) is the figure in dark purple.

RESEARCH/ADDITIONAL NOTES:
This simple scene focusses on the Devil’s (Satan’s) interactions in heaven with the Lord God. The design of the figures & their colouring comes from “Job 01 – Job’s first test – Scene 01 – The Lord & Satan talk”.

The word the Lord God uses in verse 3, which is translated into english as persuaded “… even though you persuaded me to harm him without cause.” is the hebrew word çûwth (sû? transliteration), which can mean to incite (to a request, with accusative of person), allure, instigate (bad sense), entice. Properly it means, to prick, i.e. (figuratively) stimulate; by implication, to seduce:— move, persuade, provoke, remove, set on, stir up, take away, etc. From this the narrative would seem to suggest that the Lord instigated/sent the tragedies on Job, rather than the Devil (Satan) using his own power by himself.

In this second encounter between the Lord God & the Devil (Satan), the later points to Job’s health and seeks to attack that next. The Lord agrees to test Job in this area, but puts a limit on the Devil’s operations with the directive, “But spare his life.”

Though Satan accused Job of having an ulterior motive in his worship (Job receiving riches, children, home, etc from the Lord), God threw this back at the Devil (ever the accuser), saying that Job had maintained his integrity, even when all his possessions had been taken away. Satan then implied that Job was only worshipping the Lord God because he had not yet given up his life. The phrase “Skin for skin!” was a proverbial saying, possibly about bartering or trading in animal skins. Satan’s accusation against Job was that a man would give all he has (his children, possessions, home, etc) in order to keep his own life. Satan thus insinuated that Job would willingly trade the “skins” (i.e. lives) of his own children in return that God would spare him his own “skin” (Job’s life). This Satanic implication was again that Job was selfish.

The Devil (Satan) then suggested that if Job were made to suffer physically, he would turn on God & curse Him to His face (the same accusation The Devil made in Job 1:11). The Devil will always think the worst of everyone else, because that is his fundamental starting point. He is utterly evil, and that evil always “colours” his thinking. The evil of the Devil manifested itself in the belief that without possessions & his health Job would have no reason to worship the Lord God. The Devil’s own evil intentions always manifest themselves, and imprint onto human beings motives. The idea that Job might enjoy worshipping God, &/or see that worship as the right & proper thing to do (regardless of what Job might get out of it!), would not occur to the Devil, since he himself had rejected his original purpose (see note below).

Surprisingly the Lord permitted Satan to afflict Job but not to kill him. God knew that Job would not deny Him.

What was the Devil’s original purpose?
Although not explicitly defined in the Bible, we can infer that the Devil’s original purpose was that of a mighty guardian cherub/angelic guardian (Ezekiel 38:14).
Many Bible scholars believe that the description found in Ezekiel chp 28 refers not to the human ruler of the city of Tyre, but to the Devil. This assumption is backed up by the fact that the human ruler of Tyre could not have been present in the garden of Eden (see Ezekiel 28:13).
Here is the description of the “king” of Tyre, who is assumed to be the Devil:

Ezekiel 28:11-17 (NLT)
11 Then this further message came to me from the LORD: 12 “Son of man, weep for the king of Tyre. Give him this message from the Sovereign LORD: You were the perfection of wisdom and beauty. 13 You were in Eden, the garden of God. Your clothing was adorned with every precious stone [2] —red carnelian, chrysolite, white moonstone, beryl, onyx, jasper, sapphire, turquoise, and emerald—all beautifully crafted for you and set in the finest gold. They were given to you on the day you were created. 14 I ordained and anointed you as the mighty angelic guardian [3]. You had access to the holy mountain of God and walked among the stones of fire.”
15 “You were blameless in all you did from the day you were created until the day evil was found in you. 16 Your great wealth filled you with violence, and you sinned. So I banished you from the mountain of God. I expelled you, O mighty guardian, from your place among the stones of fire. 17 Your heart was filled with pride because of all your beauty. You corrupted your wisdom for the sake of your splendour. So I threw you to the earth and exposed you to the curious gaze of kings.”

[2]
The identification of some of these gemstones is uncertain.