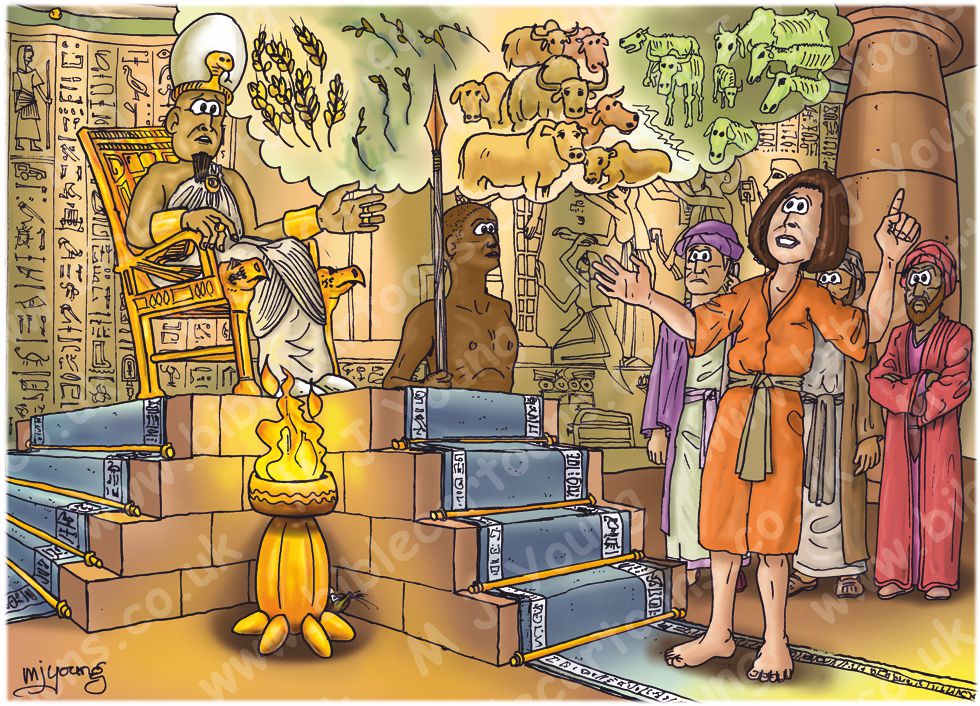 Genesis 41:17-36 (NLT)
17 So Pharaoh told Joseph his dream. “In my dream,” he said, “I was standing on the bank of the Nile River, 18 and I saw seven fat, healthy cows come up out of the river and begin grazing in the marsh grass. 19 But then I saw seven sick-looking cows, scrawny and thin, come up after them. I’ve never seen such sorry-looking animals in all the land of Egypt. 20 These thin, scrawny cows ate the seven fat cows. 21 But afterward you wouldn’t have known it, for they were still as thin and scrawny as before! Then I woke up.
22 “Then I fell asleep again, and I had another dream. This time I saw seven heads of grain, full and beautiful, growing on a single stalk. 23 Then seven more heads of grain appeared, but these were blighted, shriveled, and withered by the east wind. 24 And the shriveled heads swallowed the seven healthy heads. I told these dreams to the magicians, but no one could tell me what they mean.”
25 Joseph responded, “Both of Pharaoh’s dreams mean the same thing. God is telling Pharaoh in advance what he is about to do. 26 The seven healthy cows and the seven healthy heads of grain both represent seven years of prosperity. 27 The seven thin, scrawny cows that came up later and the seven thin heads of grain, withered by the east wind, represent seven years of famine.
28 “This will happen just as I have described it, for God has revealed to Pharaoh in advance what he is about to do. 29 The next seven years will be a period of great prosperity throughout the land of Egypt. 30 But afterward there will be seven years of famine so great that all the prosperity will be forgotten in Egypt. Famine will destroy the land. 31 This famine will be so severe that even the memory of the good years will be erased. 32 As for having two similar dreams, it means that these events have been decreed by God, and he will soon make them happen.
33 “Therefore, Pharaoh should find an intelligent and wise man and put him in charge of the entire land of Egypt. 34 Then Pharaoh should appoint supervisors over the land and let them collect one-fifth of all the crops during the seven good years. 35 Have them gather all the food produced in the good years that are just ahead and bring it to Pharaoh’s storehouses. Store it away, and guard it so there will be food in the cities. 36 That way there will be enough to eat when the seven years of famine come to the land of Egypt. Otherwise this famine will destroy the land.”

LIGHTING NOTES:
The firelight in the foreground of this scene provides the primary light source.

CHARACTERS PRESENT:
Pharaoh sits on his golden throne on the raised platform. Joseph (barefoot) stands on the right

RESEARCH/ADDITIONAL NOTES:
The dream Pharaoh had is represented by the images in the cloud-like shape at the top of the scene. On the left of the cloud is the 7 heads of grain, “full and beautiful” and by them the 7 heads of grain “blighted, shriveled, and withered by the east wind”. On the right of the cloud-like shape are the 7 “fat, healthy cows” and the 7 “sick-looking cows, scrawny and thin”.

I have used the background, throne and dais (platform) from a previously drawn Bible Cartoon for the basis of this scene. The Pharaoh in that scene (see Exodus 14 – Parting of the Red Sea – Scene 02 – Pharaoh’s court) is not the same person as in this one from Genesis. According to some quick research I did *1, Joseph lived in Egypt in the 19th century BC, whereas the Exodus took place some 400 years later.

The Bible clearly tells us in Exodus chapter 1, verse 8 “Then a new king (Pharaoh), who did not know about Joseph, came to power in Egypt.” Clearly a number of years had passed and Joseph’s assistance in averting national disaster in Egypt had been forgotten!

The dates for the life of Joseph and the Exodus might be contested, but I hope you can see the reason I have drawn two different Pharaoh’s, the one above (from the time of Joseph – 19th Century BC) and the Pharaoh of the Exodus, during the 15th Century BC.

I have drawn the Pharaoh in the book of Exodus as a very angry man, most of the time! The Pharaoh who reigned earlier in history (in Genesis 41) I have drawn a bit plumper, with a smaller head dress and lots of rings on his fingers. His clothing is a little simpler as well, representing the earlier time in history.


*1 – Quotes from 2 web sites about Biblical archaeology, & the dates of Joseph and the Exodus in particular:

- 1 Kings 6:1 is seen as dating the Exodus to c. 1446 BC, and Exodus 12:40 is seen as placing the entrance of Jacob and his family into an Egypt where Joseph holds high office under the reign of Senusret III.

- Joseph’s career as an Egyptian governmental official would thus begin under Senusret II and would continue into the reign of Senusret III.

“We have outlined above the chronological data in the Bible that demonstrate that the Exodus took place in 1446 BC.“


Bible Doctrine Notes
41:1-32 EVIL AND SUFFERING, Providence (2.33B)
God can use what we humans see as disaster to fulfil His purposes. People suffered famine, but God both provided a means for them to survive that threat and elevated Joseph to a high authority in Egypt, which was part of God’s plan for him. What appears to be disastrous in the short term may turn out to be God’s leadership for good in the longer term.

41:16, 25, 28, 32 God, Sovereignty (1.15B)
God has many ways to speak to people; in his sovereignty over all life, He spoke to Pharaoh’s through troubling dreams, which were later interpreted by Joseph. God sometimes speaks to us through strong feelings in our hearts, through the words of a faithful preacher or prophet, scripture reading, through dreams, etc. Just as not all spoken or written words are from God, so not all dreams are from God either.