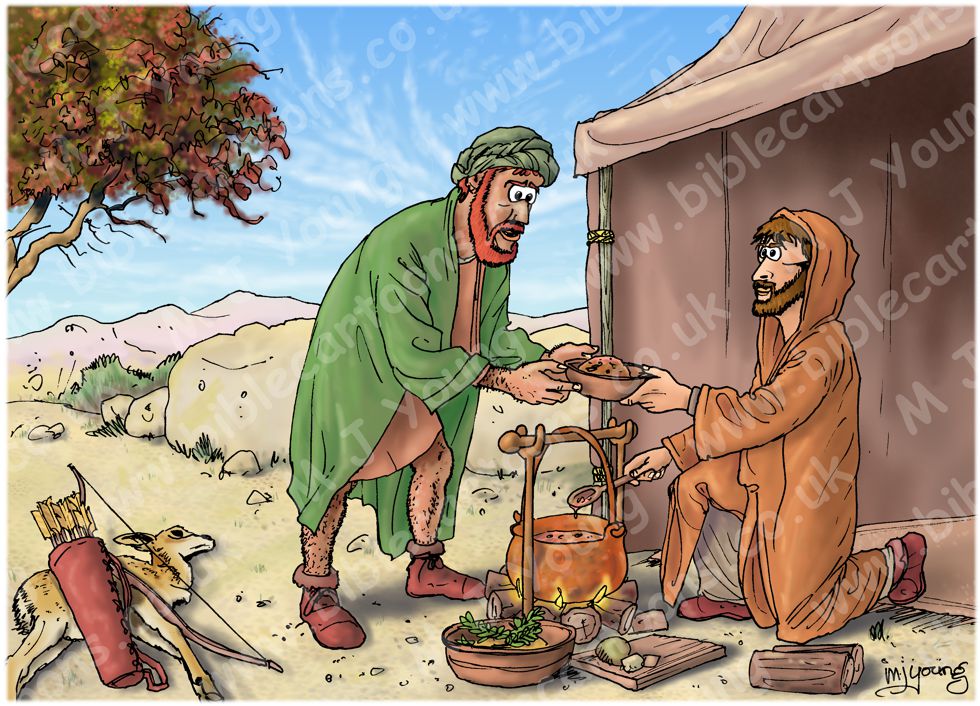 Genesis 25:29-34 (NLT)
29 One day when Jacob was cooking some stew, Esau arrived home from the wilderness exhausted and hungry. 30 Esau said to Jacob, “I’m starved! Give me some of that red stew!” (This is how Esau got his other name, Edom, which means “red.”)
31 “All right,” Jacob replied, “but trade me your rights as the firstborn son.”
32 “Look, I’m dying of starvation!” said Esau. “What good is my birthright to me now?”
33 But Jacob said, “First you must swear that your birthright is mine.” So Esau swore an oath, thereby selling all his rights as the firstborn to his brother, Jacob.
34 Then Jacob gave Esau some bread and lentil stew. Esau ate the meal, then got up and left. He showed contempt for his rights as the firstborn.

TIME OF DAY:
Unspecified in Bible, I have set the scene in the middle afternoon.

LIGHTING NOTES:
Sunlight from the left casts shadows to the right of figures and objects in this scene.

RESEARCH/ADDITIONAL NOTES:
I have drawn Jacob in some other scenes, but this is the first one in which I have depicted Esau, his twin brother. We know from Genesis 25: 25 that Easu “was very red at birth and covered with thick hair like a fur coat.” I hope I have shown his red hair & over all hairiness! The Bible says that “Esau became a skillful hunter. He was an outdoorsman”. Notice I have drawn him with a bow and quiver of arrows with a deer, at his feet. I have drawn Esau in green and brown robes, as a reflection of his love of the outdoors.

Both Esau and Jacob have soft leather shoes, which is a departure from the leather sandals I usually draw!

In the scene you can see Jacob spooning out some of the lentil stew and handing it over to his twin brother.