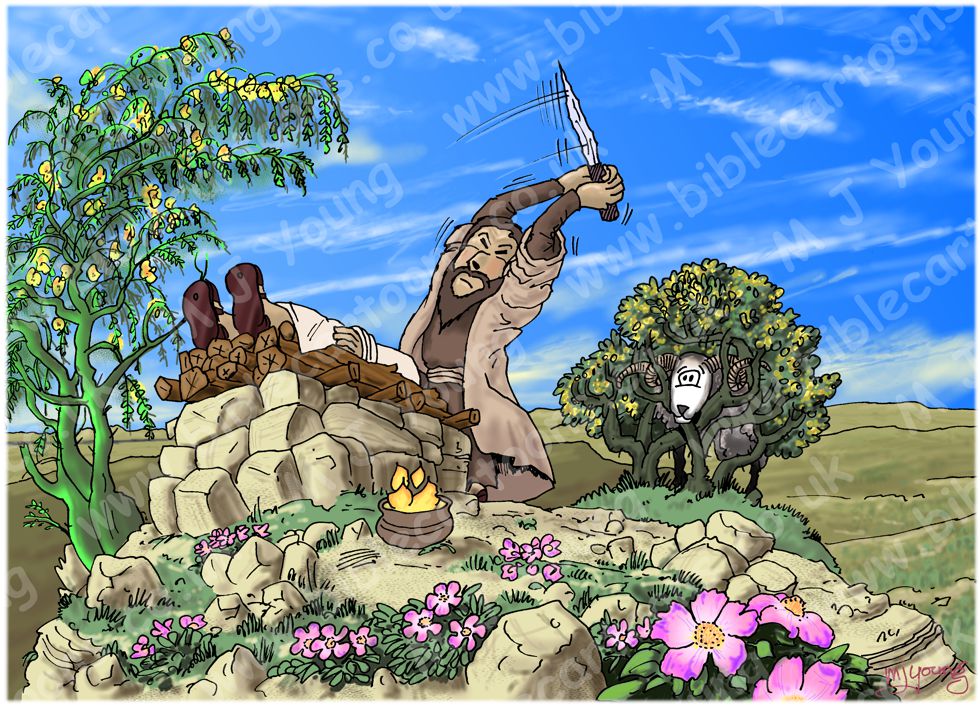 Genesis 22:9-10 (NLT)
9 When they arrived at the place where God had told Abraham to go, he built an altar and placed the wood on it. Then he tied Isaac up and laid him on the altar over the wood. 10 And Abraham took the knife and lifted it up to kill his son as a sacrifice to the LORD.

LIGHTING NOTES:
Scene 03 – Sacrifice – natural, sunlight. some glow from the fire in the pot.

The land of Moriah is only mentioned twice in the Bible – in this Genesis event & in 2 Chronicles 3:1.
Various people have speculated where this land is. There appears to be no definitive agreement. A later writer (of 2 Chron. 3:1) applies the name of Moriah to the mount on which Solomon’s Temple was built, in Jerusalem.

“Abraham journeyed from the land of the Philistines, and on the 3rd day of the journey, he saw the place afar off (Genesis 22:4). This might suggest some prominent mountain farther North than Jerusalem. Jerusalem could not be seen “afar off” by one approaching either from the South or the West. The Samaritans lay the scene of sacrifice on MT. GERIZIM.
— International Standard Bible Encyclopedia

There were wooded hills around Jerusalem which would not have required the transport of firewood for the sacrifice, this fact suggests a location of Moriah somewhere other than Jerusalem.

Some writers suggest that Mount Gihon or Calvary is the mountain on which Isaac was nearly sacrificed.

For the purposes of my cartoon, I have taken the name Moriah to mean Jerusalem. I the time of Abraham have assumed that the area was heavily wooded 7 that no village or town as yet existed where present day Jerusalem is built.

Plants in cartoon:
Tree on left = Parkinsonia aculeata, “Jerusalem thorn” has many yellow flowers, which bloom at any time of year, but especially in spring & summer.

I have researched these plants & am reasonably confident that they could have been in & around the area (Jerusalem / Moriah) where Abraham & Isaac were!

Beer-sheba, where Abraham dwelt, is about forty-two miles south of Jerusalem.


Bible Doctrine Notes
22:9-14 MIRACLE, Faith (2.23B)
All of Isaac’s life was a miracle. Born to aged parents, he survived Abraham’s faith-inspired decision to kill him in obedience to God’s command. The provision of the substitute ram caused Abraham to name the place “the Lord will provide”. Although we may not understand how and why God acts as He does, but we can count on Him to provide for us when we act in faith and obedience to Him.