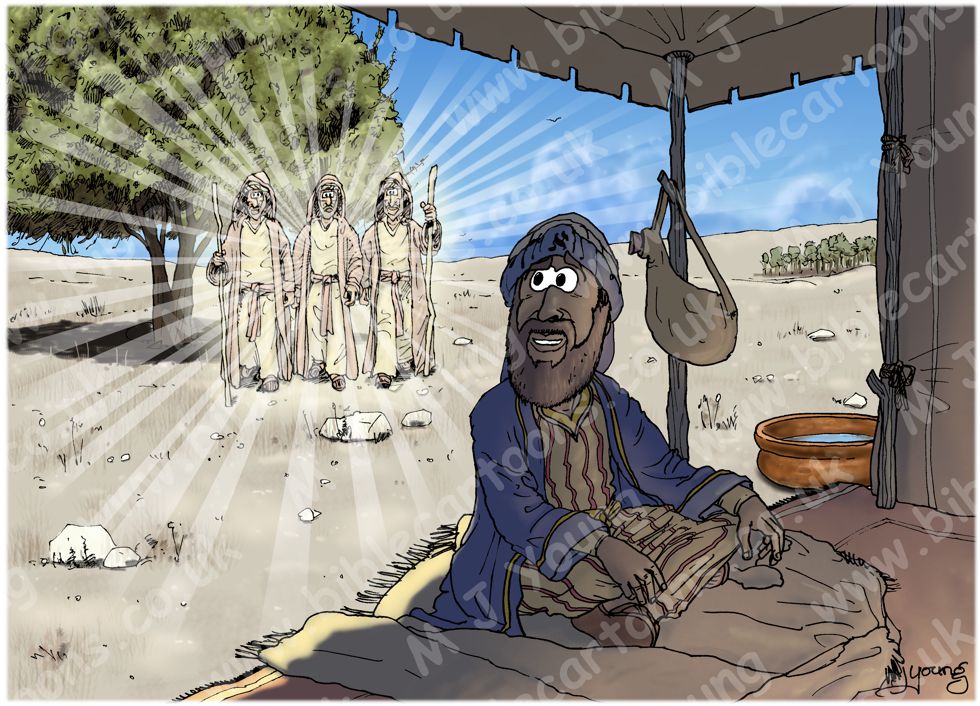 Genesis 18:1-5 (NLT)
1 The Lord appeared again to Abraham near the oak grove belonging to Mamre. One day Abraham was sitting at the entrance to his tent during the hottest part of the day. 2 He looked up and noticed three men standing nearby. When he saw them, he ran to meet them and welcomed them, bowing low to the ground.
3 “My lord,” he said, “if it pleases you, stop here for a while. 4 Rest in the shade of this tree while water is brought to wash your feet. 5 And since you’ve honored your servant with this visit, let me prepare some food to refresh you before you continue on your journey.”
“All right,” they said. “Do as you have said.”

TIME OF DAY:
Verse 1 tells us it is “hottest part of the day”, so I have set this scene at noon.

LIGHTING NOTES:
Powerful sunlight from directly overhead illuminates this scene, creating strong light and shadow effects. Notice Abraham is sitting in deep shadow, cast by his tent canopy. I have introduced a glow from sunlight entering the tent, which illuminates the figure of Abraham from the right.

CHARACTERS PRESENT:
Abraham, sitting in the entrance to his tent. Three visitors by a tree.

RESEARCH/ADDITIONAL NOTES:
There are two versions of this scene:
01) (This page) Genesis 18 – The three visitors – Scene 01 – Abraham’s greeting (Version 01). In which the 3 men/Lord in this scene have a light glow & radiating light lines coming from their bodies.

The New King James bible refers to the site of Abraham’s tent as being on the “plains of Mamre”, whilst other bible translations refer to the “oaks” (more probably “terebinths”) of Mamre, probably referring to a grove of such trees. You can see the grove in the right background of my scene. The grove of Mamre was either in, or near the city called Hebron (see map). Mamre was an Amorite, who had 2 brothers, called Eshcol and Aner. All of whom were friends and allies of Abraham.

The large tree in the background is a Terebinth (Pistacia palaestina).

The colour of Abraham’s skin, hair & clothing was established in an earlier cartoon (Genesis 13 – Abram and Lot separate – Scene 03 – Land choice). In that scene Abram/Abraham is 75 years old. In the scene above he is 99 years old. I have slightly altered his skin & hair colour to show this, although you can’t really see that modification since Abraham is covered in dark blue shadow from his tent! 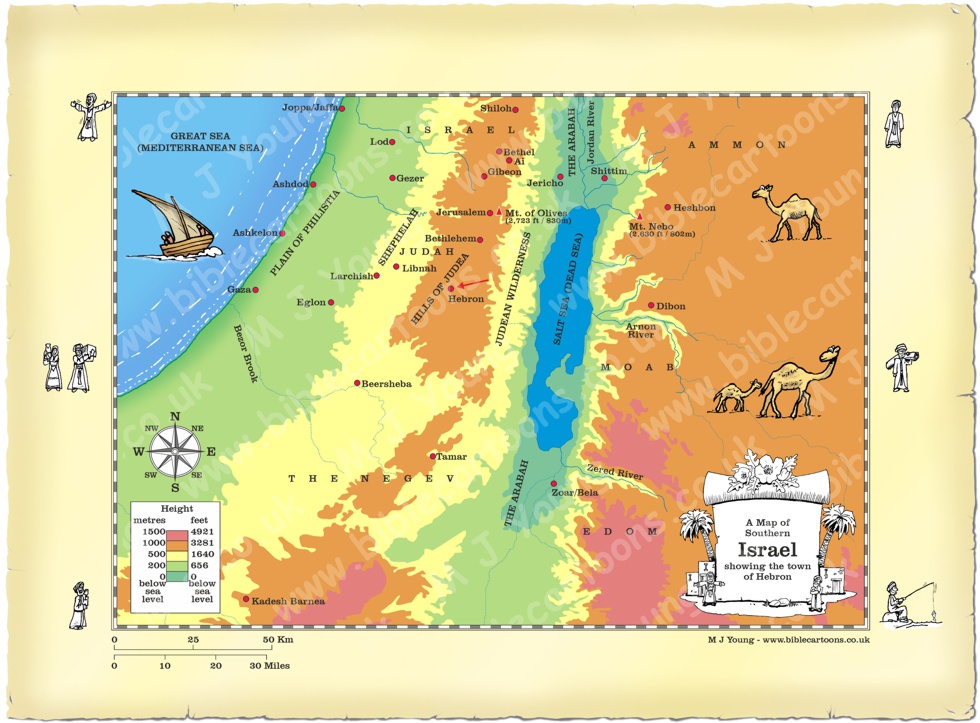 Link to related Map
Click blue bar below to see Map of Bethel with purchase option:
View/Buy this map


Bible Doctrine Notes
18:1-19:29 REVELATION, Messengers (3.21G)
God surprised Abraham, communicating through messengers (human beings who deliver God’s message) who arrived unexpectedly. In this passage the near eastern hospitality custom is clearly evident. It would have been an offence not to offer food and shelter to these strangers.
In Genesis 17:1 the narrative says “The Lord appeared to him [Abraham]…” and a similar phrase is used in 18:1, though in reference to the 3 men. Use of singular & plural references to God/the 3 men in the Hebrew text adds a mysterious element. The 3 men could leave Abram, yet God was still present to talk to him. The 3 men ate & could have their feet washed, a traditional custom of hospitality in the near east. The same Hebrew word em>mal’ak can be translated “messenger” or “angel”. The disbelief of Abraham & Sarai underscores God’s ability to carry out his revealed plan, even with limited faith on our part.