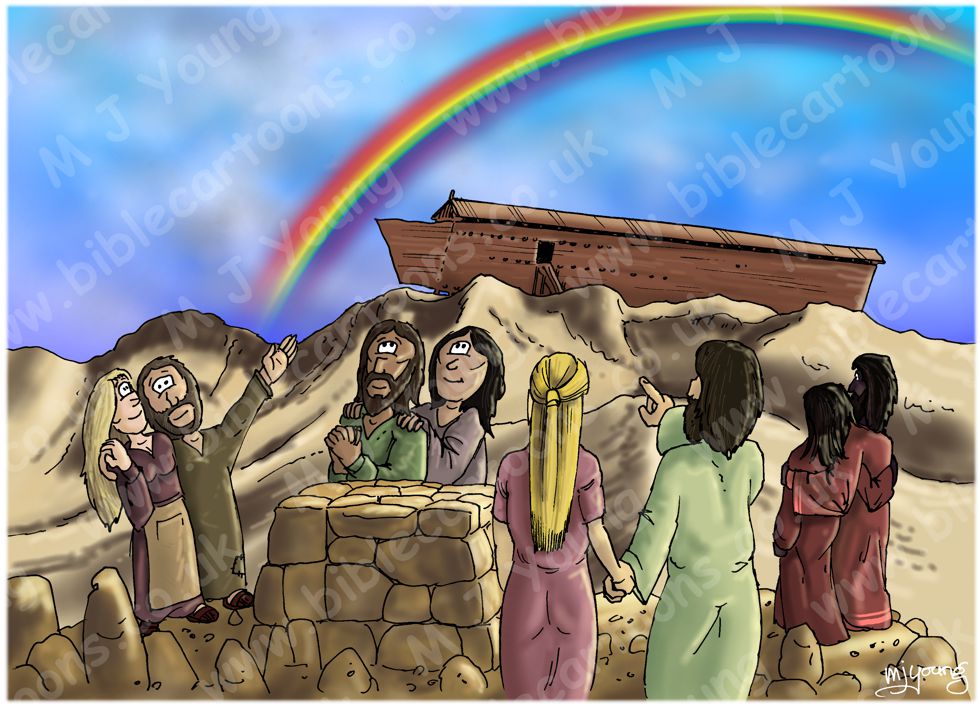 Genesis 8:20-22 & 9:1-17 (NLT)
20 Then Noah built an altar to the Lord, and there he sacrificed as burnt offerings the animals and birds that had been approved for that purpose [1]. 21 And the Lord was pleased with the aroma of the sacrifice and said to himself, “I will never again curse the ground because of the human race, even though everything they think or imagine is bent toward evil from childhood. I will never again destroy all living things. 22 As long as the earth remains, there will be planting and harvest, cold and heat, summer and winter, day and night.”

Genesis 9:1-17 (NLT)
God confirms His covenant
1 Then God blessed Noah and his sons and told them, “Be fruitful and multiply. Fill the earth. 2 All the animals of the earth, all the birds of the sky, all the small animals that scurry along the ground, and all the fish in the sea will look on you with fear and terror. I have placed them in your power. 3 I have given them to you for food, just as I have given you grain and vegetables. 4 But you must never eat any meat that still has the lifeblood in it.
5 “And I will require the blood of anyone who takes another person’s life. If a wild animal kills a person, it must die. And anyone who murders a fellow human must die. 6 If anyone takes a human life, that person’s life will also be taken by human hands. For God made human beings [2] in his own image. 7 Now be fruitful and multiply, and repopulate the earth.”

8 Then God told Noah and his sons, 9 “I hereby confirm my covenant with you and your descendants,
10 and with all the animals that were on the boat with you—the birds, the livestock, and all the wild animals—every living creature on earth. 11 Yes, I am confirming my covenant with you. Never again will floodwaters kill all living creatures; never again will a flood destroy the earth.”

17 Then God said to Noah, “Yes, this rainbow is the sign of the covenant I am confirming with all the creatures on earth.”


Bible Doctrine Notes
8:20 PRAYER, Thanksgiving (5.54C)
Bearing in mind the destruction of animal life in th flood, Noah’s sacrifice of animals was very precious. Noah’s gratitude for God’s salvation was expressed in something valuable to him. Noah, and Abraham, Isaac & Jacob all built altars to God (See 12:8; 26:25; 35:7) in gratitude.

8:21-22 EVIL AND SUFFERING, Natural Origin (2.31D)
We know from history that evil in human hearts continued after the flood. In His grace God decided to bear with human evil rather than destroy it again. Human evil continues in the created world until Jesus returns again. God controls his creation; evil does not threaten the natural order. God didn’t promise we would never have natural disasters.

8:21 SIN, Depravity (2.54B)
The Bible does not make any philosophical or systematic assertions concerning the cause of humanity’s depravity, yet the universality of sin is affirmed everywhere in the Bible. Through Adam sin entered the world bringing condemnation to all people.

8:21 SALVATION, Grace (4.22C)
Through God’s covenant with Noah all people have been blessed by God.

8:22 CREATION, Hope (2.15E)
God promised the flood survivors that the forces of nature would act in predictable harmony. Sowing and reaping a harvest in the future would be a reality for human beings. God maintains the constancy of the natural world order, which offers hope to His people.

8:22 HISTORY, Promise (3.33B)
It is not human accomplishments but God’s promises that stabilise history and maintain continuity.

9:1-6 HUMANITY, Responsibility (2.41B)
Part of the nature of “being made in God’s image” relates to human responsibility. Only God can give life. Part of our function is to responsibly use procreative power. Beyond this, we are to exercise responsible control over the rest of the world and its creatures. Leviticus 17:11 offers notes on the relationship between life and blood.

9:4-11 CHRISTIAN ETHICS, Moral Limits (4.42D)
The covenants God established with His people establish ethical limits which are acceptable to God. Because God is good we know the limits He establishes for us are also good. We are to honour life in all His creatures.

9:7 HISTORY, Linear (3.31B)
Human procreation and family life cause history to continue. It is God’s blessing and creative acts that make this a reality for us. Responsible human procreation fulfills God’s purpose.

9:8-17 GOD, Personal (1.12B)
Covenants between God and mankind express His relationship to people. God initiates covenant and chooses to be gracious to His chosen people. Covenant is the outward expression of the inner disposition of the heart of God. Through this covenant, God expresses His personal interest in all humanity to come and that He has a benevolent disposition towards us all.

9:8-17 CREATION, Hope (2.15E)
This divine covenant guarantees the continuity of humanity and of God’s creation. Through it we see that God is committed to establishing a stable world which is working to bring His kingdom. Humans can plan for the future, assured that life will continue until Jesus the Christ comes again.

9:8-17 THE CHURCH, Covenant People (5.11A)
God fulfills His promises. What He promised to do for Noah, He did. God based His work with His people on His own grace, not on any goodness which the people might possess or perform. This covenant establish a relationship. In ancient times covenants were common among many people groups; between equal parties, but more often between superior and inferior parties. Victorious kings established covenants with defeated ones, outlining the relationships between both parties.
God’s covenant with Noah uniquely had no stipulations: God freely entered into relationship with His people. God is thus a covenant-making God, seeking to bless all people. This covenant prepared the way fro all future covenants God would make with His people. God created the world, sent the flood and established the covenant with the earth and its inhabitants.
God blesses His people with promises which are sure and unwavering. Though people may be fearful of every rain cloud and what it might bring, yet God gave us the rainbow as a sign of His promise of His constant care and vigilance, not to destroy us by flood again. Though this promise is still in effect, it does not prohibit God from finally judging His universe.

9:12-16 REVELATION, Author of Grace (3.22D)
The covenant of grace reveals God as the author of creation and hope. God will redeem all creation and gave a sign for all to see. We are daily reminded of God’s covenant with us, even though we forget it. God wishes to redeem, save, and sustain all that He has made. Ancient people often looked upon nature’s signs as revelation of God’s work. The rainbow is a symbol of hope and forgiveness in the Bible.
God is ever present at work on His dream and plan for human beings and His created world. Each day and night are clear reminders of His power and care: without God’s constant revealed intention to bring good into the world, people would despair. The earliest revelation of the divine is His commitment: He is a God who keeps His promises, even when human’s do not.