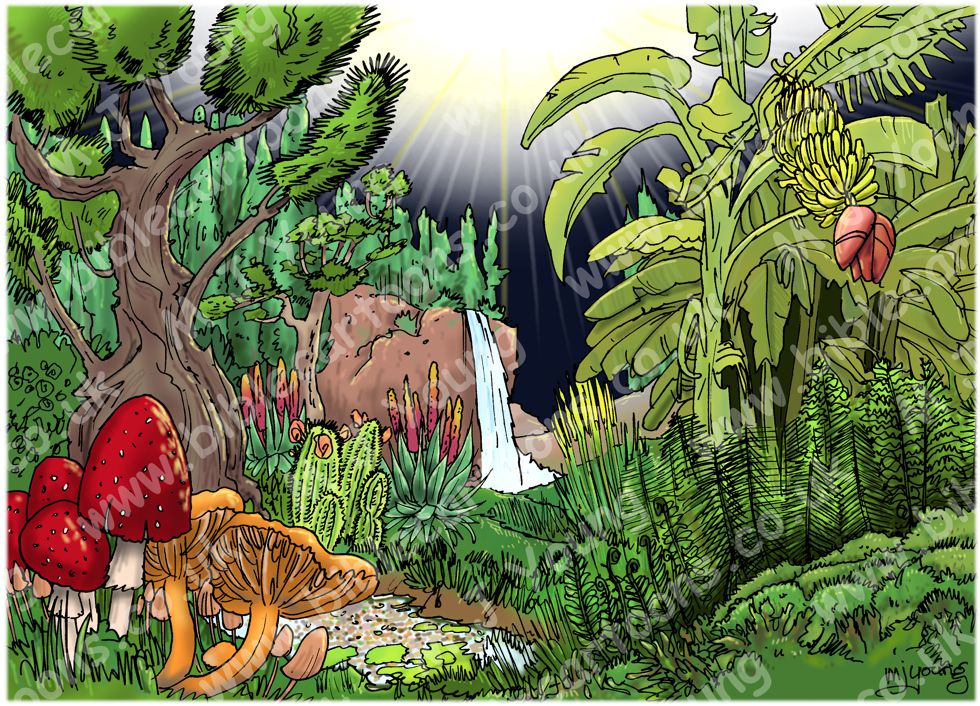 LIGHTING NOTES:
Although the Lord God had not made the Sun, Moon or stars yet (they were made on the fourth day) you wouldn’t be able to see this scene without some light! So I have a powerful light at the top of the scene, which is the light emanating from God Himself.

RESEARCH/ADDITIONAL NOTES:
In many ways this is a simple scene; it shows lots of different types of plants growing on the Earth.
I wanted to represent the major plant groups which are:
Main plant groups [1]
Mosses and liverworts (Bryophytes)
Ferns and horsetails (Pteridophytes)
Conifers (Gymnosperms)
Flowering plants (Angiosperms)

Algae
Most algae are no longer classified within the Kingdom Plantae (Plant Kingdom) [2]. They are photosynthetic like plants, and “simple” because their tissues are not organized into the many distinct organs found in land plants. The largest and most complex marine forms are called seaweeds. [2]

I wanted to include all the major plant (or plant-like) organisms in my picture, even if people don’t include them in their man-made classification systems! You can see some green blobs, which are representatives of the algae, in the pool of water, in the lower middle of my drawing.

Fungi
The classification of fungi has been controversial until quite recently in the history of biology. Unlike plants, which generally gain carbon through photosynthesis, fungi obtain carbon by breaking down and absorbing surrounding materials. One major difference between fungi & plants is that fungal cells have cell walls that contain chitin, unlike the cell walls of plants, which contain cellulose.*2. This large group of organisms include the yeasts and moulds, as well as the more familiar mushrooms.

Like the algae, fungii are not currently included in the human-made classification Kingdom Plantae (Plant Kingdom), but that didn’t stop me from including some examples in my picture! You can see some red-topped fungii, & some orange & brown types in the lower left of my drawing.

Moses
Are land plants, but do not have seeds or flowers. Mosses reproduce with spores, which are distributed from a seta, which is a little bulb on a thin stalk, sticking up from the moss. Mosses lack a vascular system, so they are restricted to smaller sizes and moist environments.

In my drawing you can see the mosses in the bottom right corner of the scene.

Ferns
Ferns, horsetails, and their allies make up the pteridophytes. These plants all have vascular systems, made up of xylem (through which flows water and nutrients from roots to leaves) and phloem (through which flows sugars and other metabolic products from leaves to roots).
Ferns do not have flowers, they reproduce by means of spores, like mosses. You can often see them if you turn over a mature leaf, where you will see rows of dots. Each dot is a sori, which which produces thousands of spores. Each spore grows into a very small plant, called a gametophyte, which in turn produces gametes (eggs and sperm), which unite to produce the fern plant.

In my drawing you can see the ferns standing taller & behind the mosses in the middle right of the scene.

Conifers
The gymnosperms (“naked seeds”) make up the third group of land plants. They produce seeds, not spores, that are contained within a cone.

In my drawing you can see a large conifer tree on the left of the scene, with many more in the background.

Flowering Plants
The final group of land plants are the angiosperms, also known as the flowering plants. The flower attracts many animals which assist in pollination, making the process of pollination more efficient and less random than in the conifers. The seed develops in an ovary, which becomes a fruit. The fruit serves to help seed dispersal, since animals eat the seeds, which generally pass unharmed through the animal’s intestinal tract. Birds and mammals may deposit the seeds, along with a little bit of fertilizer, a long way from the original plant.

The cactii represent the flowering plants in my scene. You can see them in the middle left of the picture. I have also included a large banana palm & many other palm trees on the right of the scene.


Bible Doctrine Notes
1:12,18,21,25,31 CREATION, good (2.15A)
The recurring phrase of God’s judgement of His creative acts “it was good” shows that all things are under His control. This is not a world of chaos, but of order. The divine assessment “it was good” is in stark contrast to creation accounts from pagan cultures of the world as a dangerous place to be escaped. The Bible’s account shows a good God creating a good world, full of wonderful things for humans to enjoy. God did not create an evil world. Human rebellion lead to the introduction of sin, hardship and pain.