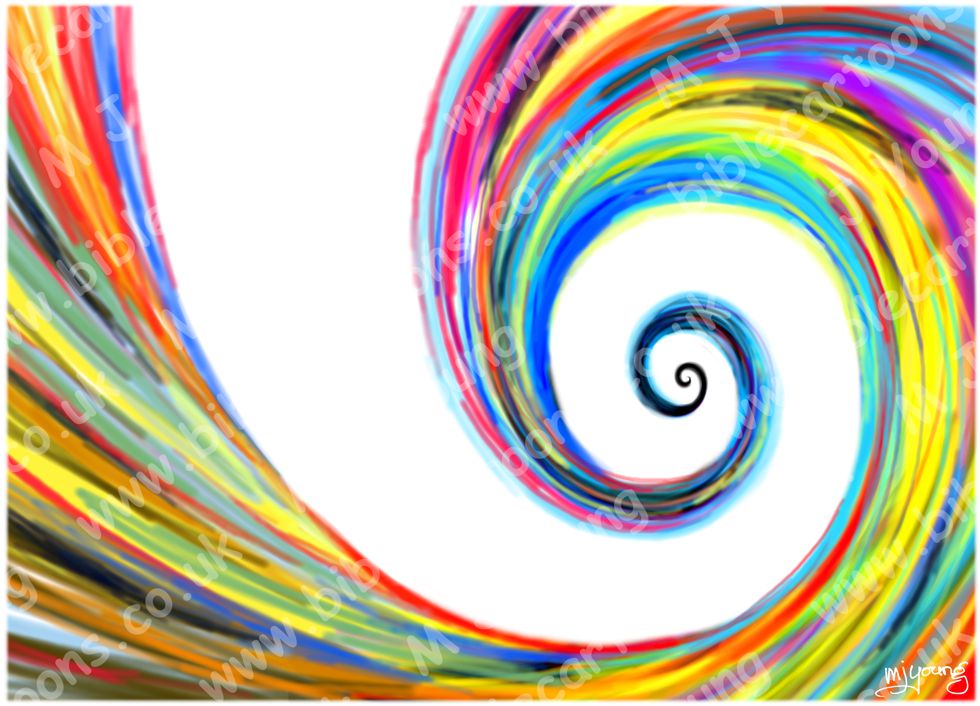 Genesis 1:3-5 (NLT)
3 Then God said, “Let there be light,” and there was light. 4 And God saw that the light was good. Then he separated the light from the darkness. 5 God called the light “day” and the darkness “night.” And evening passed and morning came, marking the first day.

RESEARCH/ADDITIONAL NOTES:
The idea for this illustration came out of a simple black & white drawing – initially just 2 halves of a canvas, one half black & the other white. But that seemed a bit bland! I then tried intermingling the dark & light, as a complex pattern of swirls. Finally I have decided to represent “light” (which is before the sun, moon & stars were created on day 4) as a spiral of colour: black & white in the centre, but breaking up into the colours of the spectrum as the spiral grows & expands.

There are various comments & opinions which try to answer the question “How can there be light created (on day 1) before the sun, moon & stars (on day4)?” The one I like best is from Adam Clarke’s Commentary, that in the original Hebrew, the word translated as light also means fire, or heat.

That there is latent light, which is probably the same with latent heat, may be easily demonstrated: take two pieces of smooth rock crystal, agate, cornelian or flint, and rub them together briskly in the dark, and the latent light or matter of caloric will be immediately produced and become visible. The light or caloric thus disengaged does not operate in the same powerful manner as the heat or fire which is produced by striking with flint and steel, or that produced by electric friction. The existence of this caloric-latent or primitive light, may be ascertained in various other bodies; it can be produced by the flint and steel, by rubbing two hard sticks together, by hammering cold iron, which in a short time becomes red hot, and by the strong and sudden compression of atmospheric air in a tube. Friction in general produces both fire and light. God therefore created this universal agent on the first day, because without It no operation of nature could be carried on or perfected.

Light is one of the most astonishing productions of the creative skill and power of God. It is the grand medium by which all his other works are discovered, examined, and understood, so far as they can be known. Its immense diffusion and extreme velocity are alone sufficient to demonstrate the being and wisdom of God. Light has been proved by many experiments to travel at the astonishing rate of 194,188 miles in one second of time! and comes from the sun to the earth in eight minutes 11 43/50 seconds, a distance of 95,513,794 English miles.’


Bible Doctrine Notes
1:3-2:25 GOD, Creator (1.13A)
This passage is the primary account of God’s activity as Creator. The passage does not explain how God created; He simply spoke things into being, from nothing into something. God designed the universe and declared the end result good in His sight.

1:3-2:1 CREATION, Progressive (2.13G)
The act of God’s creation went from the general to the specific, and from simpler to higher complexity. God worked for 6 days and rested on the seventh. Many people contend that the Hebrew term “day” em>yom should be translated as an unspecified unit of time, not a 24 hour period, especially since the sun and moon (which mark off time for us here on earth) were not created until the 4th day. Whether the creation took 6 literal (24 hour) days or a much longer period of time, the important point is that this miraculous creation of the universe was an act of love by a sovereign God. God as an orderly, purposeful Creator is th central emphasis.