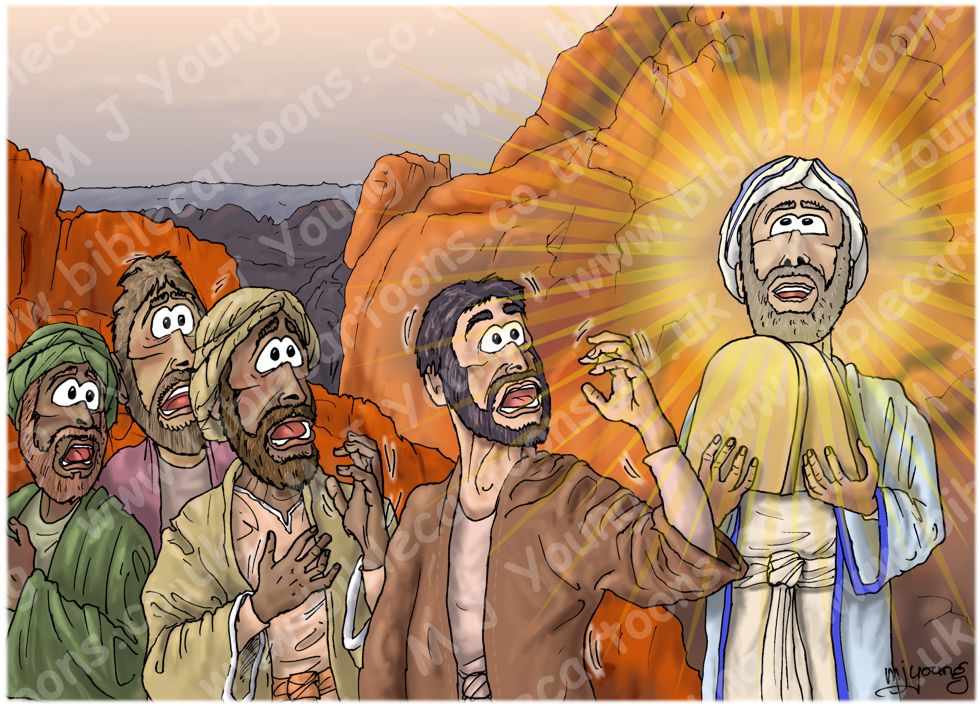 Exodus 34:29-32 (ANIV)
29 When Moses came down from Mount Sinai with the two tablets of the Testimony in his hands, he was not aware that his face was radiant because he had spoken with the Lord. 30 When Aaron and all the Israelites saw Moses, his face was radiant, and they were afraid to come near him. 31 But Moses called to them; so Aaron and all the leaders of the community came back to him, and he spoke to them. 32 Afterwards all the Israelites came near him, and he gave them all the commands the Lord had given him on Mount Sinai.

TIME OF DAY:
I have set this scene in early morning.

LIGHTING NOTES:
The sun has just come up in the east (behind & left of the viewer) turning the rocks of Mount Sinai deep oranges & reds.

RESEARCH/ADDITIONAL NOTES:
I enjoyed drawing the radiating glow around Moses’ face in this picture. I am pleased with the rich reds in the background rocks of Mount Sinai as well.


Bible Doctrine Notes
32:29-35 REVELATION, Divine Presence (3.21B)
Moses was God’s constant messenger who travelled between Himself (on the mountain) and His chosen people. Moses passed on each of God’s commands to His people, waiting anxiously to hear God’s Word at the foot of the mountain. Whenever Moses was in God’s presence he unveiled his face, so that Master and dedicated servant could meet face-to-face, in an act of trust and closeness. Revelation changed Moses’ appearance, but not his humanity: the mediator of God’s word and recipient of revelation did not become divine. The written divine word was not all the people needed. They also needed a mediator to interpret that word, for the new situations that the passage of time took them in to.