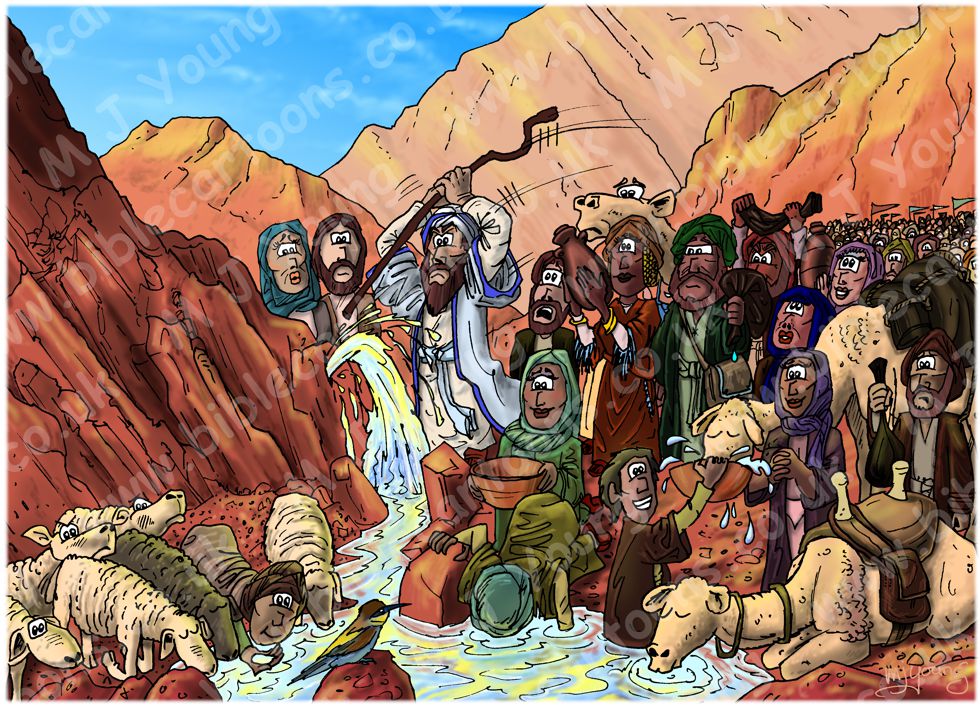 Exodus 17:5-7 (ANIV)
5 The Lord answered Moses, “Walk on ahead of the people. Take with you some of the elders of Israel and take in your hand the staff with which you struck the Nile, and go. 6 I will stand there before you by the rock at Horeb. Strike the rock, and water will come out of it for the people to drink.” So Moses did this in the sight of the elders of Israel. 7 And he called the place Massah [1] and Meribah2 because the Israelites quarrelled and because they tested the Lord saying, “Is the Lord among us or not?”

LIGHTING NOTES:
Although we can not see the sun, it is shining directly on the heads of many of the Hebrew people in this scene, coming from the left. The sun is low in the sky, as in just after dawn.

RESEARCH/ADDITIONAL NOTES:
There are three versions of this scene:
01) (Previous page) Exodus 17 – Water from rock – Scene 04 – Striking the rock (Sunset version). In this version strong sunlight is shown on people’s faces.

02) (This page) Exodus 17 – Water from rock – Scene 04 – Striking the rock (Colour version). In this version I have removed the strong sunlight on people’s faces, but the original colours are employed in the rest of the scene (as in Sunset version).

03) (Next page) Exodus 17 – Water from rock – Scene 04 – Striking the rock (Brown version). In this version strong sunlight is shown on people’s faces, and an over all brown tone is used in colouring the surrounding rocks & people’s clothes, creating a more harmonized scene.

In my initial sketches I just had Moses, striking the rock, with water gushing out, but then I thought it might be fun to add the people’s responses & expressions. Some people are awe-struck, some are still grumbling (like the men with empty waterbags), some are praying (like the lady next to the camel in the foreground.) I particularly like the children’s responses: one is standing in the water, watering his camel, whilst the other is on the left of the pool, drinking amidst the sheep!

I have also added a bird on a rock, in the foreground. It is a European Bee-eater (Merops apiaster.)

I am pleased with the way this cartoon has turned out.


Bible Doctrine Notes
17:1-7 DISCIPLESHIP, God’s Leadership (4.33A)
The Hebrew community was united in obedience to God’s command, but when no water was found at their next stop, they began to grumble and quarrel with God’s representative Moses. They began to question God’s leadership and to threaten Moses. Moses continued to obey God, and God, in turn, affirmed him as leader with the miracle of the rock of Horeb. God assists and affirms his leaders when they are obedient in following His commands.

17:4-6 PRAYER, Petition (5.54D)
God shows His faithfulness, even to a grumbling, disobedient people. Sometimes God answers our prayers by asking us to act in obedience to His commands.

17:6-7 MIRACLE, Nature (2.23A)
Just as the Hebrew people needed food I the wilderness, they also needed water. Water was present, and God used Moses to show it to His people. Although rebellious people can not expect God to answer their demands with a miracle, yet, in this case, God may work miracles for His rebellious people. We can marvel at God’s grace when He chooses to supply our needs miraculously despite our rebellious attitude and behaviours. God works miracles in His way, on His timescale, for whom He chooses.
The Hebrew word for miracle môwphêth means a conspicuous wonder (as a special display of God’s power), a sign, and /or a token (of future event), a portent.
God may work through the natural world and natural processes of our universe, according to the laws of nature, or He may choose to work supernaturally: above and beyond the natural world He has created. Both the natural and supernatural ways are miraculous because God is at work to reveal Himself and His purposes. The centre of miracle is that human beings are made aware of God’s presence and work, through our faith.