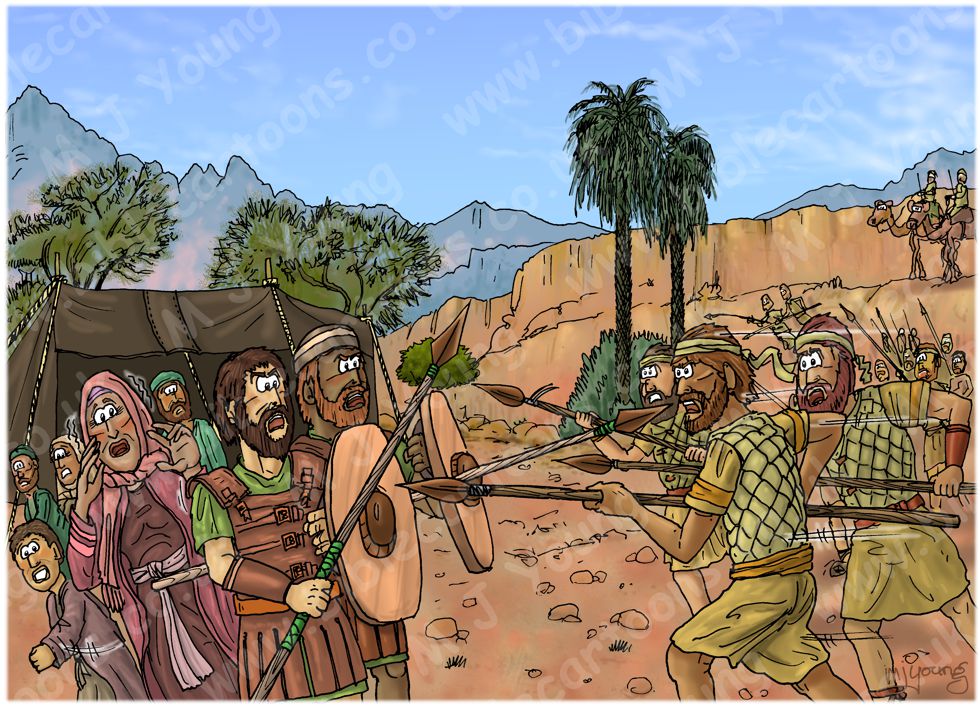 TIME OF DAY:
Unspecified in the Bible narrative, I have set this scene in the mid morning.

LIGHTING NOTES:
Sunlight (high & on the left of this picture) illuminates this scene, casting shadows to the right of people and objects.

CHARACTERS PRESENT:
On the left are some un-named Hebrew (Israelite) people. On the right are the attacking Amalakites.

RESEARCH/ADDITIONAL NOTES:
The Israelites (on the left) are running away screaming from the sudden Amalekite attackers. We can see two Israelite soldiers (armed with spears & shields) taking up a quick defensive stance.

This scene occurs at some time around 1600-1200 B.C. which was the late Bronze Age. For this reason I have drawn the soldiers using bronze tipped spears (before iron was widely used). The Amalekite spear tips are rounded, leaf-shaped in design, with grey bindings that attach the bronze spear head to the wooden shaft. Whilst the Israelite bronze spear heads are more straight-edged & more rectilinear in design, with green bindings.

I have drawn the Amalekite soldiers wearing padded armour; two or more layers of thick cloth with wadding inserted between the layers, to provide some protection for the wearer. I imagine that mass-produced, matching uniforms for soldiers is a relatively recent development, however, I wanted to show a clear difference between the Amalekites & the Israelites. For this reason I have shown the Amalekites in pale green/yellow padded armour clothing, whilst the Israelites are in red/brown leather armour.

Who were the Amalekites?
Amalekite, member of an ancient nomadic tribe, or collection of tribes, described in the Old Testament as relentless enemies of Israel, even though they were closely related to Ephraim, one of the 12 tribes of Israel. The district over which they ranged was south of Judah and probably extended into northern Arabia. The Amalekites harassed the Hebrews during their Exodus from Egypt and attacked them at Rephidim near Mount Sinai, where they were defeated by Joshua. They were among the nomadic raiders defeated by Gideon and were condemned to annihilation by Samuel. Their final defeat occurred in the time of Hezekiah.
[Source: https://www.britannica.com/topic/Amalekites]

The name Amalek is not mentioned in writings outside the Bible. The proposed identification of the Amalekites with the Amaw or the Shasu of Egyptian sources is untenable. In the biblical genealogical system, Amalek is the son of Esau’s son Eliphaz by Eliphaz’s concubine Timna (Gen. 36:12). On the analogy of the genealogies of the sons of Nahor by concubinage (Gen. 22:24) and of Abraham’s sons by Keturah and Hagar it may be surmised that Amalek’s genealogy was intended to imply his special status as a nomad as distinct from the sedentary Edomites, in the same way as the Ishmaelites or the children of Keturah were distinct from the sedentary descendants of Abraham. There may be geographical significance in the listing of Amalek after Edom in the Song of Balaam (Num. 24:18, 20).
[Source: https://www.jewishvirtuallibrary.org/the-amalekites]

The Amalekites’ unrelenting brutality toward the Israelites began with an attack at Rephidim (Exodus 17:8–13). This is recounted in Deuteronomy 25:17–19 with this admonition: “Remember what the Amalekites did to you along the way when you came out of Egypt. When you were weary and worn out, they met you on your journey and attacked all who were lagging behind [typically women and children]: they had no fear of God. When the LORD your God gives you rest from all the enemies around you in the land he is giving you to possess as an inheritance, you shall blot out the name of Amalek from under heaven. Do not forget!”

…The Amalekites’ hatred of the Jews and their repeated attempts to destroy God’s people led to their ultimate doom. Their fate should be a warning to all who would attempt to thwart God’s plan or who would curse what God has blessed (see Genesis 12:3).
[Source: https://www.gotquestions.org/Amalekites.html]

Below is the rough pencil sketch I drew to design this scene. 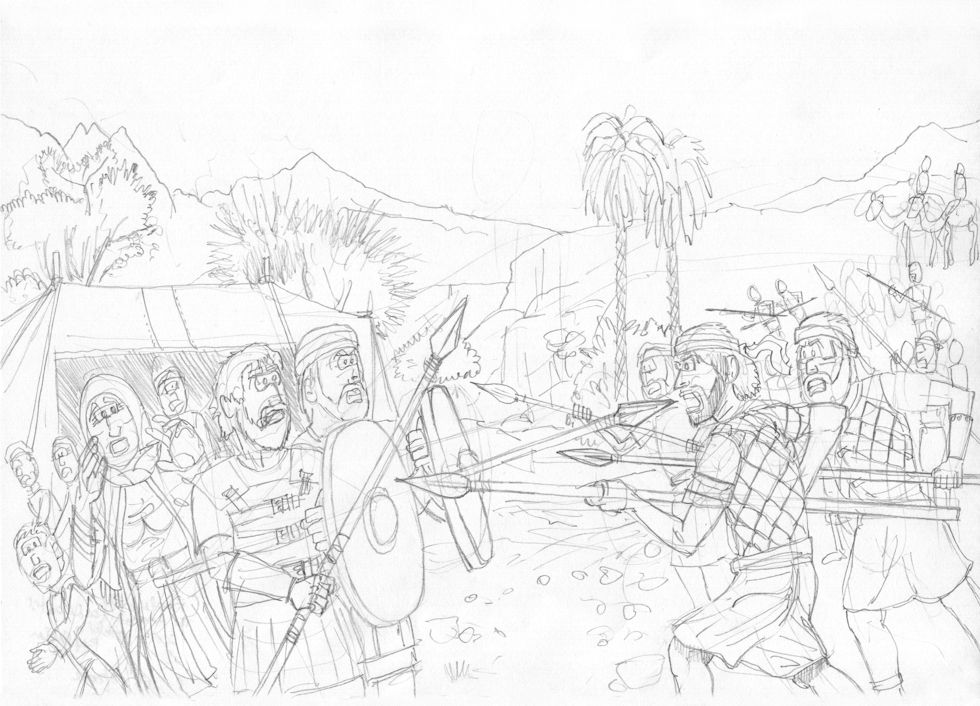