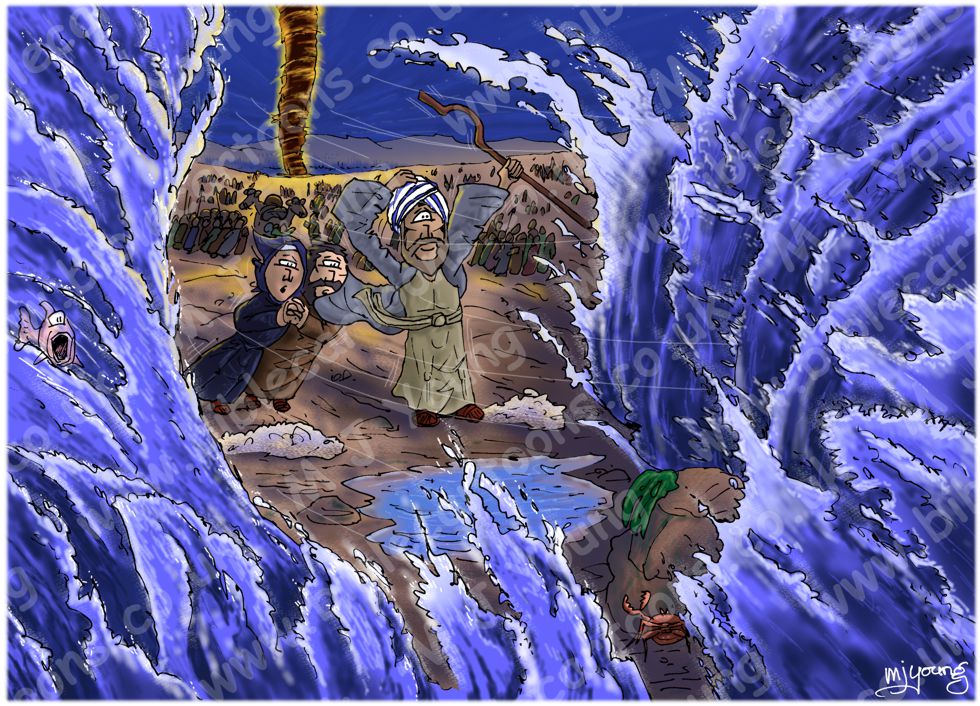 Exodus 14:21 (NLT)
Then Moses stretched out his hand over the sea, and all that night the Lord drove the sea back with a strong east wind and turned it into dry land. The waters were divided, …

TIME OF DAY:
Verse 21a tells us that the scene took place at night.

LIGHTING NOTES:
As in the following scene (Exodus 14 – Parting of the Red Sea – Scene 10 – Walking through (2)) the water, landscape & figures are illuminated both by a cool, blue light coming from the crescent moon (unseen, behind the viewer) & by the warm yellow/reds of pillar of fire, seen in the background. The moon light & fire light is reflected in the sea water which is parted by the power of God. It can also be seen on the faces & clothes of the figures.

CHARACTERS PRESENT:
Moses (holding staff), Aaron & Miriam (hugging each other to the left of Moses), fish in the parting sea water on the left, crab, on the exposed sea bed, at the bottom right of the scene. various Hebrew people in the mid-ground, with the Egyptian army behind the pillar of fire, in the background.

I decided to draw some of that wind-generated foam that you see on beaches in stormy conditions, which you can see in this scene, at Moses feet. I really enjoyed drawing all that foam & windswept water!

Note the crab on the sea bed, & the fish in the sea. to the left of the picture – just a bit of fun!


Bible Doctrine Notes
14:21 HOLY SPIRIT, Vocabulary (1.31C)
The Holy Spirit is not mentioned in Israel’s greatest Old Testament deliverance: the victory over Egypt. God did use the east wind; wind being the same Hebrew word ruach as spirit.

14:21 MIRACLE, Redemption (2.22B)
God’s redemption from Egyptian slavery is was the central miracle for Israel. The crossing of the sea created identity and faith in the Hebrew people. How did these frightened rebels (see 14:10-12) come to believe in God’s redemptive purposes (14:31)? The Bible clearly states that God miraculously used His created nature: the wind blew back the waters and dried up land. Moses obediently stretched out his hand and God responded to that act of faith by sending the strong east wind. Then, after Israel crossed over the dry ground, Moses again stretched out his hand and God brought back the waters. The Egyptians were drowned, and Israel was redeemed. The important event here is God’s victory; that day God saved Israel. God had introduced Himself on the international scene, and saved His chosen people through a mighty miraculous act in history.