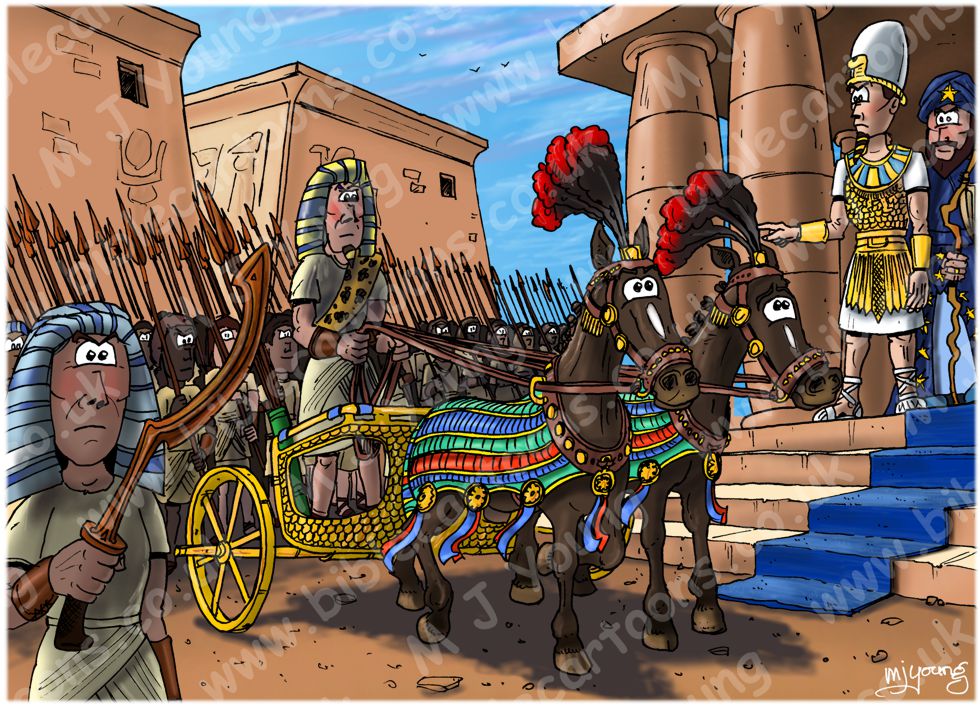 Exodus 14:6 (ANIV)
So he [Pharaoh] had his chariot made ready and took his army with him.

LIGHTING NOTES:
The sun, which is behind the buildings on the left, provides the lighting for this scene.

CHARACTERS PRESENT:
The king of Egypt (Pharaoh) is standing on the steps of his palace, dressed in white, gold & blue.
One of his magicians (dressed in blue) stands behind him.
The Egyptian army, mustered & ready to pursue the Hebrew people.

RESEARCH/ADDITIONAL NOTES:
We can see the Pharaoh’s chariot before the steps of his palace. I found various photographs of chariots from museums, on the internet, which helped me to design my version. Similarly, I found reference drawings & photographs of stone carvings, which give us a clue as to what the ancient Egyptians wore.

I have included one of the two magicians I drew in an earlier scene, standing behind the Pharaoh. see Exodus 08 – The ten plagues of Egypt – Plague of gnats.

Egyptian chariots
Chariots were originally invented in Mesopotamia and were initially drawn by donkeys, mules, oxen and even goats. Chariots were effective in ancient military use because of their high speed, mobility and strength, which gave them an advantage over infantry. However, the chariot also had several disadvantages, notably its size, expense, high breakdown rate and its dependence on the right terrain. Because they were noisy, chariots were not able to launch sudden strikes against an enemy either.

Chariots offered a more stable platform than horse-borne archers, & a chariot could also carry more ammunition than a single rider was able to. In a battle, chariots often delivered the first strike and were closely followed by an infantry advance, exploiting the resulting breakthrough of enemy lines. This tactic was particularly useful against tight units of spearmen. After a battle, chariots were deployed to pursue and disperse retreating enemy forces. Egyptian light chariots contained one driver and one warrior, who often wielding a bow. After depleting all his arrows, a short spear could be employed.

Khopesh, Sickle-sword
The Egyptian soldier in the left foreground is holding a Khopesh, the Egyptian name of the Canaanite “sickle-sword”, in Assyrian known as sappara. A typical khopesh was 50–60 cm (20 to 24 inches) in length.

The blade is only sharpened on the outside portion of the curved end. The inner curved side was designed for hooking an opponents weapon and disarming them. These weapons were originally made of bronze (as in my illustration) but were later made of iron.

Various Pharaohs are depicted with a khopesh, and some have been found in royal graves, such as the two examples found with Tutankhamun.