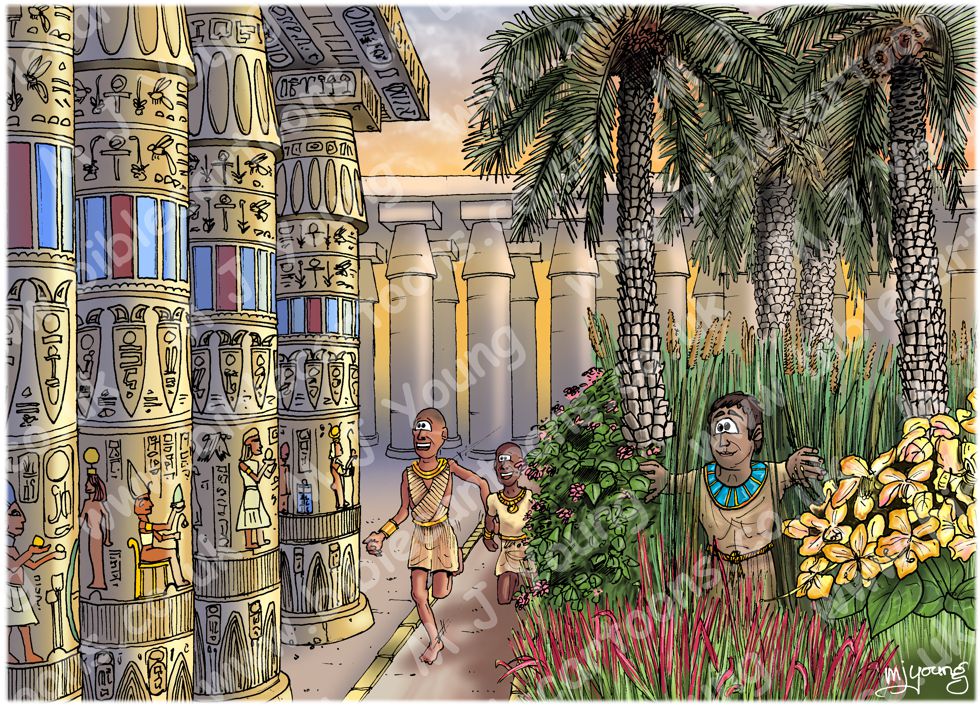 Exodus 2:10 (ANIV)
When the child grew older, she [Moses mother] took him to Pharaoh’s daughter and he became her son. She named him Moses [1], saying, “I drew him out of the water.”

LIGHTING NOTES:
The sun in on the right of the scene, casting shadows to the left of objects.

CHARACTERS PRESENT:
Moses (child) hiding among grasses on the right, with two Egyptian friends, running to find him on the left of the scene.

RESEARCH/ADDITIONAL NOTES:
There are two versions of this scene:
01) (Previous page) Exodus 02 – Birth of Moses – Scene 04 – Moses playing (Version 01). This is the original version, with bare chested Egyptian boy.

02) (This page) Exodus 02 – Birth of Moses – Scene 04 – Moses playing (Version 02). This is the newer, more modest version (specifically requested by a customer) which covers up the bare chested boy in the scene.

This scene is not mentioned in the Bible, but was requested by a US sports ministry. It shows Moses playing hide and seek with two Egyptian friends. Moses is hiding among the tall grasses in Pharaoh’s garden.

The trees behind Moses are date palms, (Phoenix dactylifera), you can see some of the fruit growing at the very top of the picture.

The tall grass that Moses is pushing aside with his hands is Halfa grass (aka Big cordgrass, and Salt reed-grass) (Desmostachya bipinnata) [1]

The red flowing bush in the scene is glory tree (aka flaming glorybower, Clerodendrum splendens.) [2]

I had some fun with the Egyptian hieroglyphic, adding Doctor Who’s TARDIS (time machine) to the forth stone column on the left of the scene!

[2]
Clerodendrum splendens (glory tree, flaming glorybower) is a species of flowering plant in the genus Clerodendrum of the family Lamiaceae, native to tropical Western Africa. It is a twining evergreen climber, growing to 9.8 feet (3 metres) or more, with panicles of brilliant scarlet flowers in summer. With a minimum temperature of 10 °C (50 °F), it requires the protection of glass during the winter months in most temperate regions.
(Source: http://en.wikipedia.org/wiki/Clerodendrum_splendens)

[3]
Imperata cylindrica is used for thatching the roofs of traditional homes throughout south-east Asia.
It grows from 2–10 feet (0.6–3 metres) tall. The leaves are about 2 cm wide near the base of the plant and narrow to a sharp point at the top; the margins are finely toothed and are embedded with sharp silica crystals. The main vein is a lighter colour than the rest of the leaf and tends to be nearer to one side of the leaf. The upper surface is hairy near the base of the plant while the underside is usually hairless. Roots are up to 3.9 feet (1.2 metres deep), but 1.3 feet (0.4 metres) is typical in sandy soil.