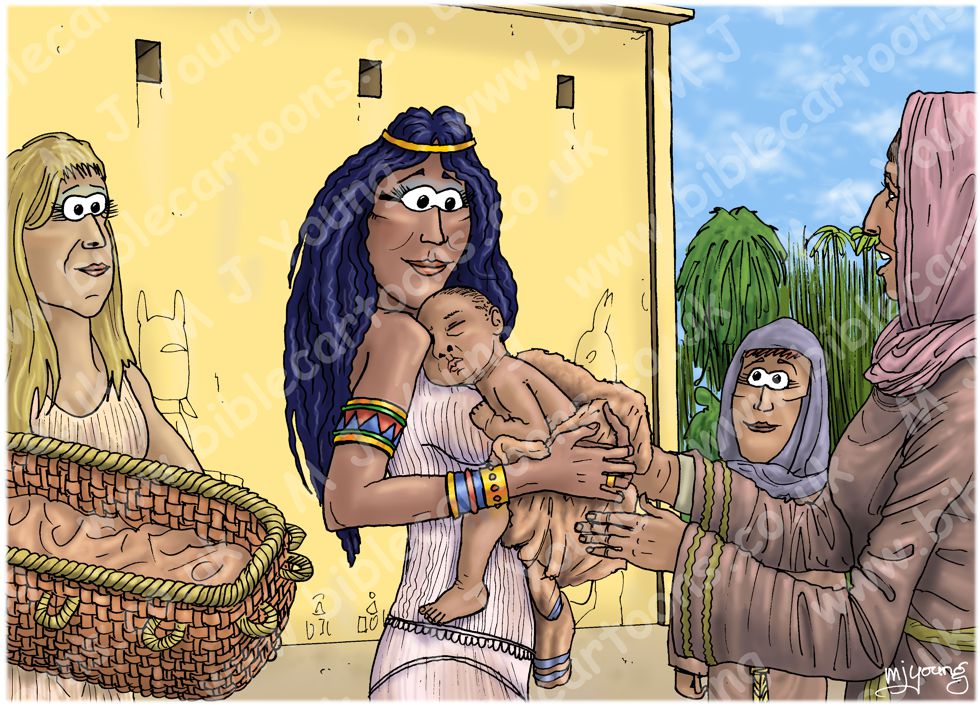 Exodus 2:9 (ANIV)
Pharaoh’s daughter said to her [Moses mother], “Take this baby [Moses] and nurse him for me, and I will pay you.” So the woman took the baby and nursed him.

CHARACTERS PRESENT:
From left to right: a female servant (carrying the reed basket Moses was in on the Nile), Pharaoh’s daughter (holding the baby Moses), Miriam (Moses’ sister) watching the scene from behind the arms of Moses’ mother, who is reaching to take Moses & nurse him.

RESEARCH/ADDITIONAL NOTES:
This scene follows on immediately from the previous one (Exodus 02 – Birth of Moses – Scene 02 – Pharaoh’s daughter) in terms of time. I have assumed that it didn’t take Miriam very long to run home to her mother & bring her back to Pharaoh’s daughter & Moses.

Notice the similarity between the backgrounds of these two scenes, which aids in the sense of continuity of the narrative, even though I drew Scene 02 – Pharaoh’s daughter in January 2014 & have only just completed Scene 03 – Moses nursed in August 2016!

I am very pleased with the way the already intimate relationship between the infant Moses & Pharaoh’s daughter has come out in this scene.

I expect Moses’ mother was delighted & relieved that her little son wouldn’t be killed (as other Hebrew baby boys had been) & that he would grow up in the luxury & provision of the Egyptian royal court, even if that meant she wouldn’t see her son very often, if at all, once he was weaned.