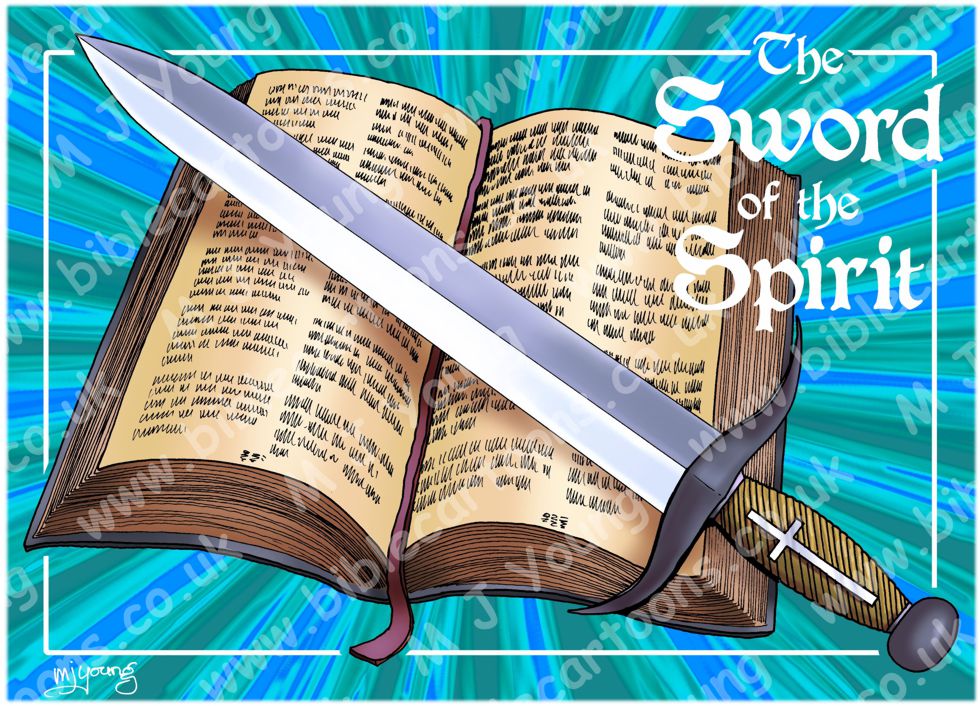 Ephesians 6:17 (NLT)
[Put on salvation as your helmet,] and take the sword of the Spirit, which is the word of God.

LIGHTING NOTES:
A single source of light comes from above & to the right.

RESEARCH/ADDITIONAL NOTES:
This is the sixth of 7 “scenes” depicting each of the pieces of the armour mentioned by the apostle Paul. Putting on the whole armour of God protects us in the battles of life & faith.

I enjoyed drawing & colouring up this illustration. I wanted to combine the metal sword with the open leather bound Bible in the same picture, since the Bible (the Word of God) is referred to as The Sword of the Spirit in the above text.

I decided early on in the design process to include a white cross on each piece of the armour, which is my way of signifying that this is not merely metal armour, but is spiritual, God-given armour, empowered by Jesus’ sacrifice on the cross.

‘Finally, the soldier takes the sword of the Spirit—the only offensive weapon mentioned. This refers to the short sword used in close combat. The sharp, short sword was one of Rome’s great military innovations. The Roman army was called the “short swords” because of its use of the short swords in winning battles. The sword’s double edges made it ideal for “cut and thrust” strategy.’
(Source: Life Application New Testament Commentary.)

There is an interesting description of typical arms & armour in a Roman legion in the following:
‘A fully equipped Roman legionary was armed with a shield (Latin. scutum), one or two javelins (Latin. pila), a sword (Latin. gladius), often a dagger (Latin. pugio), and perhaps, in the later Empire period, darts (Latin. plumbatae). Conventionally, the javelins would be thrown to disable the shields of the enemy before engaging in close combat, for which the gladius would be drawn. The soldier generally led with his shield and thrust with his sword. All types of gladius appear to have also been suitable for cutting and chopping motions as well as for thrusting.’
(Source: “De Re Militari” (Latin. “Concerning Military Matters”) by the late-Latin writer Publius Flavius Vegetius Renatus.)

Application: why & how to wield the Sword of the Spirit?
‘ “[The Sword] Of the Spirit” refers to the source or origin of the sword; hence it is “the sword given by the Spirit.” “The sword of the Spirit” is specified as the Word of God. “Word” (rhēma; cf. Eph. 5:26; Rom. 10:8, 17; 1 Peter 1:25) refers to the preached Word or an utterance of God occasioned by the Holy Spirit in the heart. Believers need this “sword” to combat the enemy’s assault, much as Christ did three times when tempted by the devil (Matt. 4:1-11).’
(Source: The Bible Knowledge Commentary: An Exposition of the Scriptures by Dallas Seminary Faculty.)

‘The Spirit makes the word of God effective as we speak it and receive it. The Spirit gives the word its penetrating power and sharp edge. Jesus’ use of God’s word in his temptation prompts our use of it against Satan (Matthew 4:4, 7, 10). With the Holy Spirit within, believers have the constant reminder of God’s word to use against Satan’s temptations. When the enemy, the tempter (Matthew 4:3-4; 1 Thessalonians 3:5), tries to tempt us to do evil, we have the power to send him away with the word of God. The Spirit will bring the words to mind.’
(Source: Life Application New Testament Commentary.)

From the above references we see that the Sword of the Spirit is the Christian’s only offensive weapon. Really it is the Sword given to us by the Spirit. All the other items (Shield, Helmet, Breastplate, etc) are for our own defensive protection.
So, what is the Sword of the Spirit? It is the Holy Bible, the Word of God, which has been described as an instruction manual for us, as we live here on Earth. It holds the complete revelation of God to his human creation. The Bible is from God & we are told that it is intended to teach, rebuke, correct and training in righteousness us Christians, in order that we can do every good work (see 2 Timothy 3:16-17 [1].)

The apostle Paul’s advice to Timothy (& to us) is is found in 2 Timothy 2:15 [2], ‘…a workman… who correctly handles the word of truth.’ Or, as it translates in the Amplified Bible: ‘correctly analyzing and accurately dividing [rightly handling and skillfully teaching] the Word of Truth.’

In a military sense, we get the image of a soldier spending countless hours practising with his weapons, to become adept, swift & deadly in their use. Then he or she can move from being aware of themselves wielding those weapons to becoming automatic in their use: the sword becoming an extension of the soldier; the soldier becoming the sword. In the same way we Christians need to read, re-read & re-re-read the Bible, with the aim of becoming so adept at using it (in defence of ourselves & attacking the spiritual forces of evil in our world) that we become an extension of God’s will & way here on earth. That is the essence of what Paul was telling Timothy in 2 Timothy 2:15.

The Sword of the Spirit is the Holy Bible, the Word of God. In order to accurately & effectively use this weapon, we need to 1) read & get to know it & 2) to practice using it. Taking the military metaphor again, imagine a soldier going into battle with a sword he or she had never used, perhaps never even lifted out of its scabbard before, facing expert swordsmen, well versed with their own weapons. Who would you expect to win that fight?! Based on that simple metaphor, it should be obvious why we Christians need to read the Bible, become familiar with it & fearlessly wield it. Like a swordsman who spends endless hours swinging his sword in practice strokes, learning to cut, thrust & parry with increasing skill, we also need to practice wielding the Word of God (the Holy Bible) until we become equally proficient with it as our Sword of the Spirit.

‘Paul implies that the battle is to be joined especially by engaging those who do not know God’s word (the gospel) with its message, after one is spiritually prepared in the other ways listed here. Paul’s ministry was thus particularly strategic, because it included close-range battle advancing into enemy ranks (Ephes. 6:19-20).’
(Source: Bible Background Commentary – The IVP Bible Background Commentary – New Testament.)

From this commentary we can see that we are to tell people who do not know what the Bible says about this amazingly rich source of life & power. We can only effectively do that once we have put on the full armour of God, in order to protect ourselves from spiritual counter-attack by the forces of evil & darkness.

Bible References
[1]
2 Timothy 3:16-17 (ANIV)
16 All Scripture is God-breathed and is useful for teaching, rebuking, correcting and training in righteousness, 17 so that the man of God may be thoroughly equipped for every good work.

[2]
2 Timothy 2:15 (ANIV)
15 Do your best to present yourself to God as one approved, a workman who does not need to be ashamed and who correctly handles the word of truth.

View all Bible Cartoons in Ephesians Go to Search by Bible Book page Do I need High or Medium qlty cartoons? FAQ’s