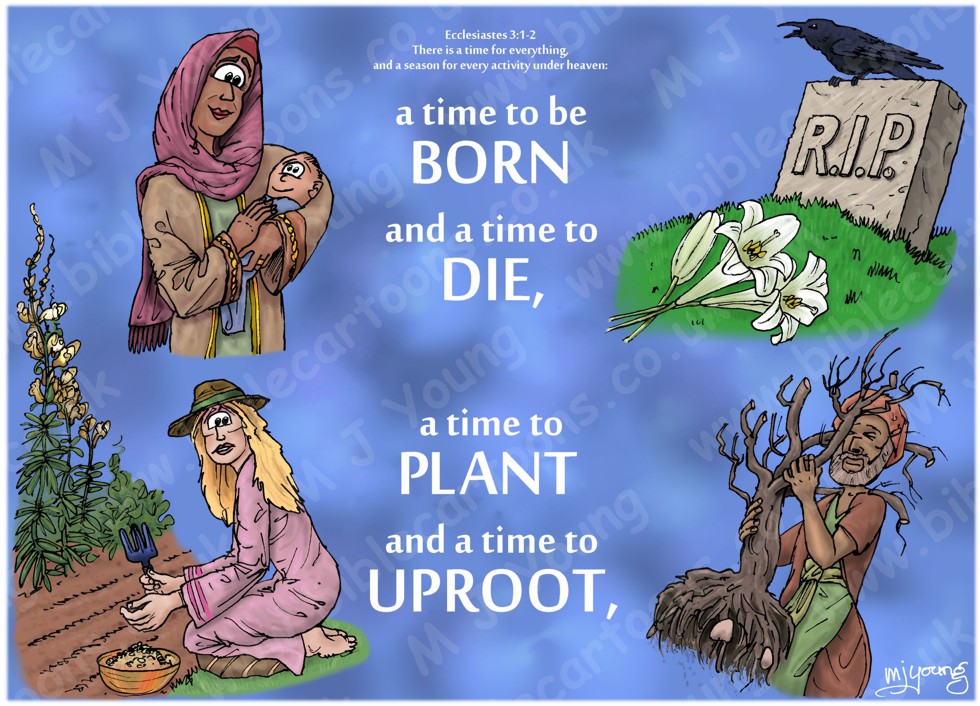 RESEARCH/ADDITIONAL NOTES:
I have decided to include verse 1 in all the following 7 “A time for everything” scenes & article notes, to remind the viewer of the point of the list (verses 2-8).

Born, Die, Plant, Uproot.
Now to the particulars: verse 2 – “a time to be born and a time to die, a time to plant and a time to uproot,” the polar opposites in this verse are birth & death, planting & uprooting.

The poem begins in reference to birth (the beginning of a person’s physical life) and death (the end of a person’s physical life), neither of which that person has any control over. When we are born, & how long we live (when we die) is determined by God in heaven. In my picture I have shown a woman holding a baby in the top left hand corner, which is indicative of birth. I have shown a grave (with R.I.P. Rest In Peace, engraved on the surface) with lilies (often used as grave-side floral tributes) & a crow (the black bird) clinging to the gravestone.

By referring to plant birth (planting) & death (uprooting) king Solomon is possibly restating the life & death condition he begins the poem with. The Message Bible version refers to “reaping” in verse 2, or harvesting at the proper time, that which has been planted. Reaping could be seen as plant death. In my picture I have represented these two states (planting & uprooting) with the woman on the bottom left, who is tilling the soil of a garden & has some seeds in a pot by her knees, & with a man on the bottom right of the picture carrying a tree he’s uprooted!

It is possible to see the end of a person’s life (referred to as “reaping” or “being harvested”) in other parts of the Bible. In Matthew 9:37-38, Jesus refers to the “harvest” of people *1. Similarly in Jesus’ parable of the weeds (Matthew 13:30) two distinct groups of people are referred to metaphorically: the wheat (righteous people, saints, the saved) & the weeds (unrighteous, wicked, unrepentant people). You can read what happens to each group at the end of time *2.
Hebrews 9:27 refers to our inevitable physical death & the following judgement *3 whilst the harvest of the unrighteous people is referred to in Revelation 14:14-20 *4 & the judgement of the dead is seen in Revelation 20:11-15 *5.
The New Jerusalem is referred to in Revelation 21, & verse 27 states that only those people whose name is written in the Lamb’s Book of Life (ie Christians) will be found there; which is the “wheat” in Jesus parable of the weeds, mentioned earlier. *6

We have seen that King Solomon started his poem of all human activity with birth & death; planting & uprooting. As a literary “echo” of that beginning, he also ends his poem with similar thoughts of birth & death, in reference to verse 8’s “a time for war & a time for peace”.

NOTES:
*1
Matthew 9:37-38 (ANIV)
37 Then he [Jesus] said to his disciples, “The harvest is plentiful but the workers are few.
38 Ask the Lord of the harvest, therefore, to send out workers into his harvest field.”

*2
Matthew 13:30 (ANIV)
30 Let both grow together until the harvest. At that time I will tell the harvesters: First collect the weeds and tie them in bundles to be burned; then gather the wheat and bring it into my barn.’ “

*4
Revelation 14:14-20 (ANIV)
14 I looked, and there before me was a white cloud, and seated on the cloud was one “like a son of man” with a crown of gold on his head and a sharp sickle in his hand.
15 Then another angel came out of the temple and called in a loud voice to him who was sitting on the cloud, “Take your sickle and reap, because the time to reap has come, for the harvest of the earth is ripe.”
16 So he who was seated on the cloud swung his sickle over the earth, and the earth was harvested.
17 Another angel came out of the temple in heaven, and he too had a sharp sickle.
18 Still another angel, who had charge of the fire, came from the altar and called in a loud voice to him who had the sharp sickle, “Take your sharp sickle and gather the clusters of grapes from the earth’s vine, because its grapes are ripe.”
19 The angel swung his sickle on the earth, gathered its grapes and threw them into the great winepress of God’s wrath.
20 They were trampled in the winepress outside the city, and blood flowed out of the press, rising as high as the horses’ bridles for a distance of 1,600 stadia.

*5
Revelation 20:11-15 (ANIV)
11 Then I saw a great white throne and him who was seated on it. Earth and sky fled from his presence, and there was no place for them.
12 And I saw the dead, great and small, standing before the throne, and books were opened. Another book was opened, which is the book of life. The dead were judged according to what they had done as recorded in the books.
13 The sea gave up the dead that were in it, and death and Hades gave up the dead that were in them, and each person was judged according to what he had done.
14 Then death and Hades were thrown into the lake of fire. The lake of fire is the second death.
15 If anyone’s name was not found written in the book of life, he was thrown into the lake of fire.

*6
Revelation 21:27 (ANIV)
27 Nothing impure will ever enter it, nor will anyone who does what is shameful or deceitful, but only those whose names are written in the Lamb’s book of life. 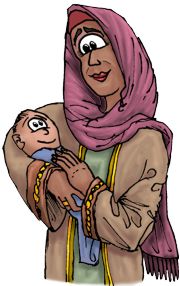