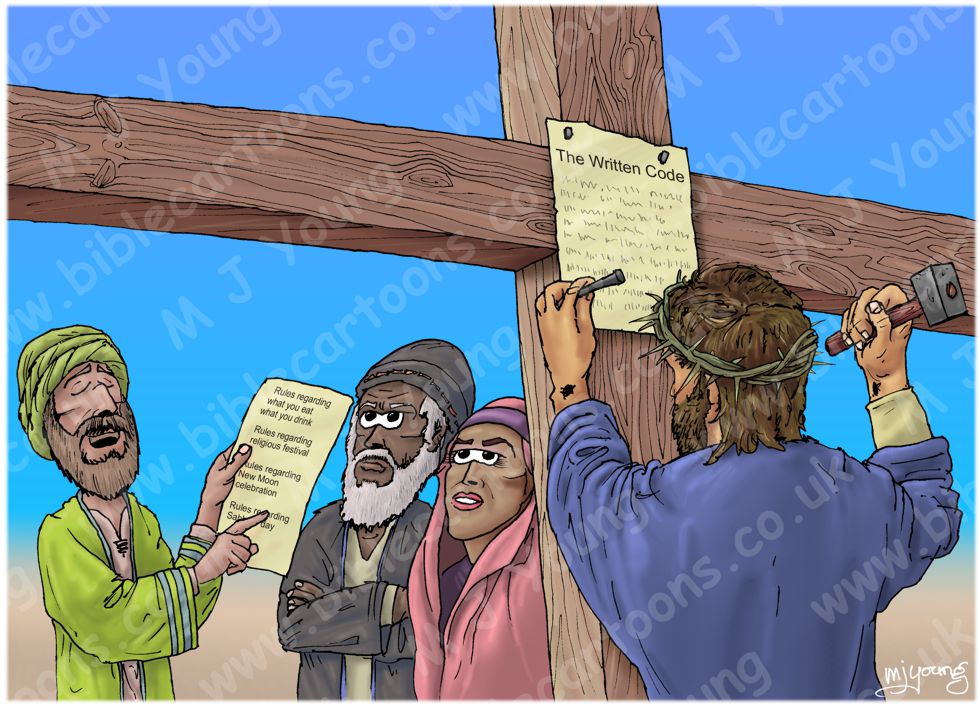 Colossians 2:11-17 (ANIV)
11 In him you were also circumcised, in the putting off of the sinful nature [1], not with a circumcision done by the hands of men but with the circumcision done by Christ, 12 having been buried with him in baptism and raised with him through your faith in the power of God, who raised him from the dead. 13 When you were dead in your sins and in the uncircumcision of your sinful nature [2], God made you [3] alive with Christ. He forgave us all our sins, 14 having cancelled the written code, with its regulations, that was against us and that stood opposed to us; he took it away, nailing it to the cross. 15 And having disarmed the powers and authorities, he made a public spectacle of them, triumphing over them by the cross. [4] 16 Therefore do not let anyone judge you by what you eat or drink, or with regard to a religious festival, a New Moon celebration or a Sabbath day. 17 These are a shadow of the things that were to come; the reality, however, is found in Christ.

TIME OF DAY:
Not specified by Bible.

LIGHTING NOTES:
Simple sunlight illuminates this scene from above left.

CHARACTERS PRESENT:
From left to right: An un-named man in green, who is pointing at a set of rules. He represents “legalism”. A man & a woman who look aggrieved . Jesus the Christ (in blue robe, nailing parchment to cross.)

RESEARCH/ADDITIONAL NOTES:
This is a fairly simplistic scene, showing Jesus nailing the written code to the cross.

The apostle Paul wrote this letter to the Colossian church. In chapter 2 he exhorted the Christian believers to continue in their faith in Christ. The purpose of Paul’s letter was his concern about errors in teaching that were beginning to creep in amongst the truth of Christ crucified. Heresy was in danger of diverting the church at Colosse away from Christ.

Chapter 2 outlines 4 “isms” that could potentially trip up the Colossian church:

Paul wrote to the Colossians that they were entertaining people in their midst who were trying to get them to return to Jewish rules & regulations. Paul pointed out that Christ’s death on the cross brought about Christian believer’s forgiveness from their sins. As verse 14 above states “having cancelled the written code [by completing all of it’s requirements, thus nullifying it], with its regulations, that was against us and that stood opposed to us; he [Jesus] took it away, nailing it to the cross.” My picture showes Jesus nailing the written code (The Law) to the cross.

In the background you can see a man in green who is pointing to a parchment full of rules. He is one of these devilish teachers, who is trying to ensnare the 2 Christian believers (the man & the woman) with his false teaching.

[5]
What is Gnosticism?
Gnosticism was a second century heresy claiming that salvation could be gained through secret knowledge. Gnosticism is derived from the Greek word gnosis, meaning “to know.”

Gnostics also believed that the material world (matter) is evil and that only the spirit is good. They constructed an evil God and beings of the Old Testament to explain the creation of the world (matter), and considered Jesus Christ a wholly spiritual God.

These two beliefs clash strongly with accepted Christian doctrine. Christianity teaches that salvation is available to everyone, not just a special few, and that it comes from grace through faith in Jesus Christ (Ephesians 2:8-9), and not from study or works. The only source of truth is the Bible, Christianity asserts.
[Source: http://christianity.about.com/od/glossary/a/Gnosticism.htm]

View all Bible Cartoons in Colossians Go to Search by Bible Book page Do I need High or Medium qlty cartoons? FAQ’s