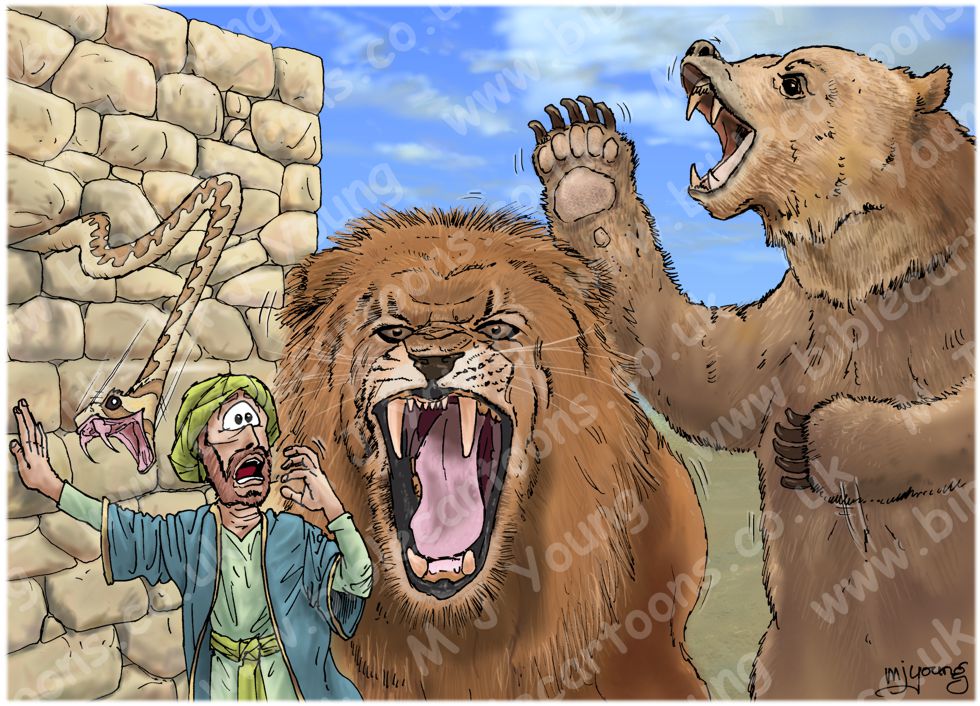 21 “I hate, I despise your religious feasts;
I cannot stand your assemblies.
22 Even though you bring me burnt offerings and grain offerings,
I will not accept them.
Though you bring choice fellowship offerings, [1]
I will have no regard for them.
23 Away with the noise of your songs!
I will not listen to the music of your harps.
24 But let justice roll on like a river,
righteousness like a never-failing stream!

25 “Did you bring me sacrifices and offerings
for forty years in the desert, O house of Israel?
26 You have lifted up the shrine of your king,
the pedestal of your idols,
the star of your god— [2]
which you made for yourselves.
27 Therefore I will send you into exile beyond Damascus,”
says the Lord, whose name is God Almighty.

[2]
Or lifted up Sakkuth your king / and Kaiwan your idols, / your star-gods; Septuagint lifted up the shrine of Molech / and the star of your god Rephan, / their idols.

TIME OF DAY:
Time is not specified in this prophetic poem.

LIGHTING NOTES:
Simple sunlight from above lights this scene.

RESEARCH/ADDITIONAL NOTES:
I particularly enjoyed drawing the animals in this scene, though all that fur on the lion & bear took a long time to colour up!

Note: I have exaggerated the size of the lion & particularly the snake in this picture. Perhaps that is a reflection of the man’s perception of the threat they pose him?!

Amos: the man & his message.
Amos 7:14 informs us that before Amos began prophesying, he had been one of the “shepherds” (sheep & goat breeder) of Tekoa, a town in the hill country of Judah about 10 miles south of Jerusalem. He was also a tender of sycamore-fig trees. It is possible that Amos was quite a wealthy man, if he owned the land on which all this farming occurred. Amos, a man from the tribe & lands of Judah possibly around 762 B.C. The message God gave him to pronounce in a time of peace of prosperity was primarily one of judgment, declaring the destruction of the nation. God would preserve a repentant remnant & Amos ends with words of hope right at the end of Amos chapter 9 (verse 11-15.). Through this remnant future blessings from God would come both to the Jews & other nations.

Syrian brown bear (Ursus arctos syriacus.)
The Syrian brown bear is a relatively small subspecies of brown bear native to the Middle East and the Caucasus (a region at the border of Europe and Asia, situated between the Black and the Caspian seas.) Fur color is usually very light brown and straw coloured. Syrian brown bear population is declining due to habitat loss, and poaching. It is now extinct in Israel.

Palestinian viper ((Vipera Palaestinae) aka Israeli viper.)
The Palestinian viper is a venomous species of snake, with an average total length (body + tail) of 28 to 35 inches (70 to 90 cm), & a maximum total length of 51 inches (130 cm.) It has a characteristic diamond pattern along its back, with yellow to yellow-orange stripe below the eyes.

Endemic to the area spanning northern and central Israel, western Syria, northwestern Jordan, Lebanon & Palestine, distribution of this viper species is concentrated in the Mediterranean coastal plains to the inland hills of Israel & Lebanon, along with the adjoining regions of Syria and Jordan. It is considered a leading cause of snakebite within its geographic range.

[3]
The auditory bulla (pl. bullae) is a hollow bony structure on the ventral, posterior portion of the skull that encloses parts of the middle and inner ear. In most species, it is formed by the tympanic part of the temporal bone.
[source: https://en.wikipedia.org/wiki/Tympanic_part_of_the_temporal_bone]

View all Bible Cartoons in Amos Go to Search by Bible Book page Do I need High or Medium qlty cartoons? FAQ’s