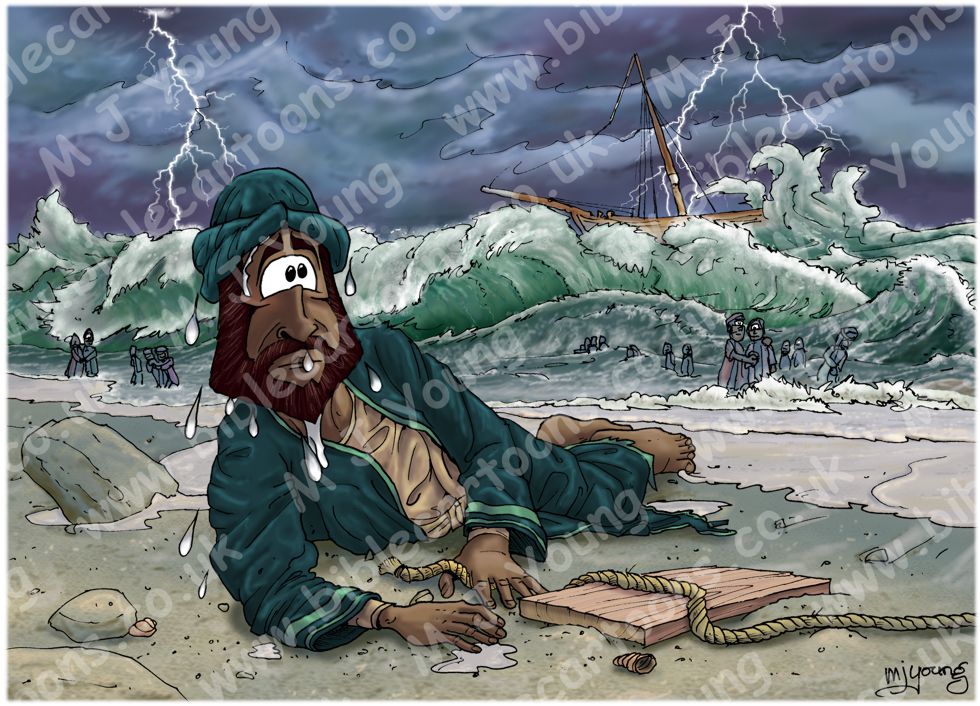 Acts 27:44 (ANIV)
The rest [of the ship’s company] were to get there [safely ashore] on planks or on pieces of the ship. In this way everyone reached land in safety.

TIME OF DAY:
Verse 39 says “When daylight came” (after the night), so this scene is set in the very early morning.

LIGHTING NOTES:
Although I have set this scene in the early morning, the storm clouds are completely obscuring the sun, so that it looks like a night scene. The storm’s lightning provides the bright white light of the scene.

CHARACTERS PRESENT:
In the foreground, on the beach is the apostle Paul. Various people can be seen in the waves, dragging themselves to shore.

RESEARCH/ADDITIONAL NOTES:
Verse 41 tells us that “the stern was broken to pieces by the pounding of the surf.” So clearly at this time the storm was still raging. You can see I have drawn a powerful wave smashing into the stern (back) of the ship. I enjoyed drawing & colouring up the sky & pounding, energetic waves in this scene.

This picture was actually first drawn for one of my “Bad Day” mug designs, but I soon realised that I could colour it up into a dramatic scene worthy of inclusion in the Bible Cartoons collection!

The colouring of Paul’s skin, hair & clothes is taken from earlier cartoons, most notably Acts 09 – Paul in Jerusalem – Scene 01 – Advocate. I like to use similar colouring between different scenes & between different stories which depicting the same character, since that maintains colour continuity across all the narratives. Having said that, I will often adjust colours slightly due to the local lighting effects of any given scene. In this scene the apostle Paul is depicted in quite dark greens, a result of being soaked to the skin & only illuminated by the lightning in this dark, stormy environment.
Notice the frayed edges of Paul’s outer robe, near his feet, which illustrate the violence of the storm on his clothes.

Some searching on the internet provided pictures of ships from the right region & era for this scene. Notice the mast has had it’s top broken off in my picture.

I researched the geology & nature of the beaches of Malta to help me select suitable colours for the beach, although the pale yellow rocks & beach can hardly be made out in the gloom of the stormy conditions! According to the geological map of Malta the region of St. Thomas Bay (a large bay in the South of Malta, where this scene is set) is Middle Globigerina Limestone. This pale yellow rock weathers into gentle slopes, rather than the underlying, harder Coralline Limestone, which forms impressive, high angle cliffs.