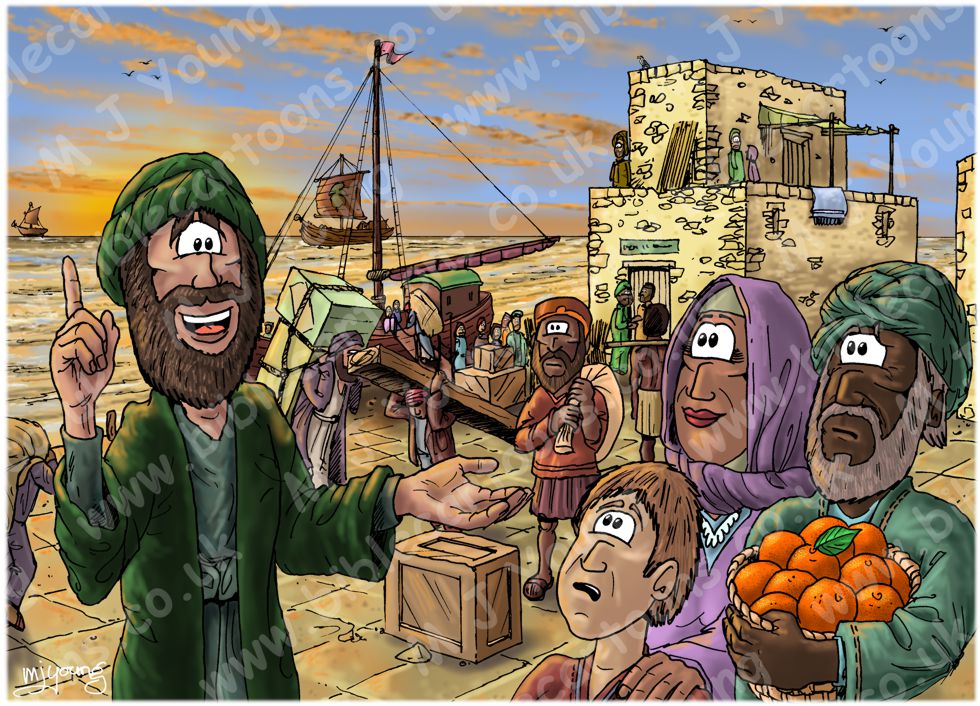 Acts 8:40 (NLT)
Meanwhile, Philip found himself farther north at the town of Azotus. He preached the Good News there and in every town along the way until he came to Caesarea.

LIGHTING NOTES:
The sun is setting in the west (left of the scene.)
Notice the orange glow that it casts on the figures of objects in this scene.

CHARACTERS PRESENT:
Philip the evangelist is on the figure in green on the left. He is telling people about Jesus the Christ, with gestures towards the sky/heavens.

RESEARCH/ADDITIONAL NOTES:
This is the last scene in this scenes. Although I found some photo reference on the internet, the scene is mostly from my imagination.

The city of Azotus is also called Ashdod, an ancient Philistine coastal capital & is about 25 miles (about 40 km) north of Gaza and about 35 miles (about 56 km) west of Jerusalem.

Despite its location four miles (6 km) from the coast, both Ptolemy and Josephus described it as a maritime city. This curious description may refer to Ashdod’s control of a separate shore-edge harbor, called Azotus Paraliyus,18 or Ashdod-Sea (Antiquities… 13:15, volume 4).
(Source: Wikipedia)

I have set this scene in Azotus Paraliyus, by the sea.

You may have noticed that Philip took off his outer robe & left it on the road by the pond, before baptising the Ethiopian eunuch in the previous scenes. When he was transported by divine power to Azotus/Ashdod his outer robe was transported with him. God is good! Philip is by the sea preaching the Good News to anyone who will listen. He probably visited the local synagogue to do this, but I thought it would be nicer to show the sea, ships, buildings & hustle & bustle of the port workers in the background.