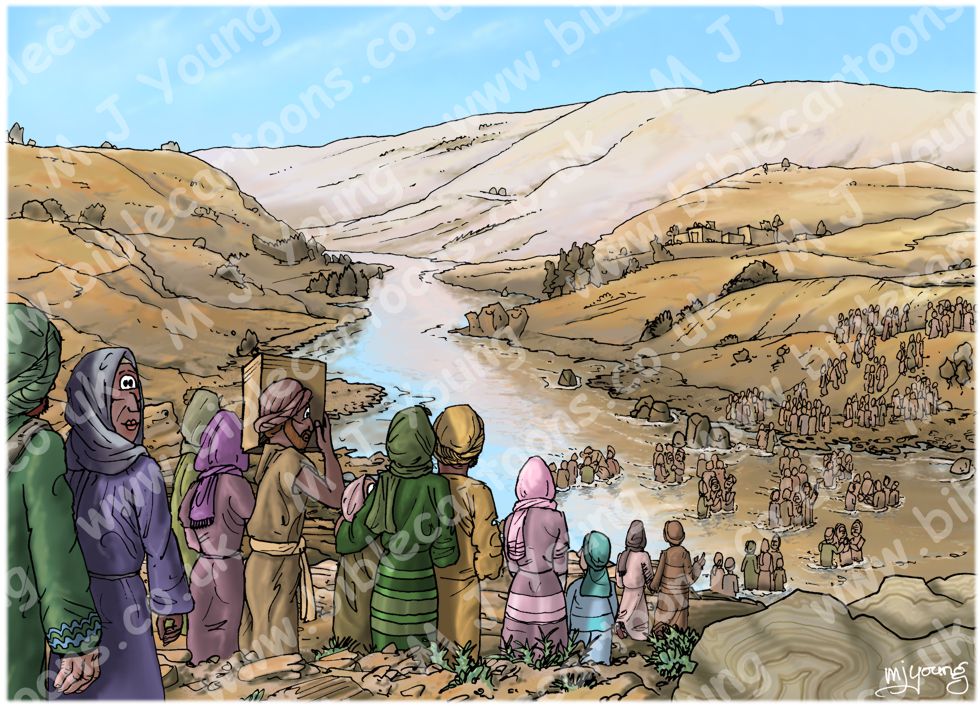 Acts 2:41 (NLT)
Those who believed what Peter said were baptized and added to the church—about three thousand in all.
many miraculous signs and wonders.

TIME OF DAY:
I have set this scene early in the morning.

CHARACTERS PRESENT:
I haven’t drawn 3000 figures! But the ones present represent the 3000 mentioned in the text above.
Notice that they are walking down to the edge & into the waters of the river, there to be baptised by immersion in the river’s water.

RESEARCH/ADDITIONAL NOTES:
I have set this scene at the River Jordan, east of Jericho. I reasoned that this is where John the Baptist probably baptised people & it is likely that the Apostles also baptised here.

The geological map shows this area to be Lisan Formation [1], a series of tiny alternating layers of pale & dark rock. Generally pale white, light brown in colour, the Lisan Formation is composed of Aragonite varves, sandstone, gravel, conglomerate, mudstone, gypsum. Notice the foreground rocks on the right have thin, undulating bands of colour running through them, which is what the Lisan Formation looks like. 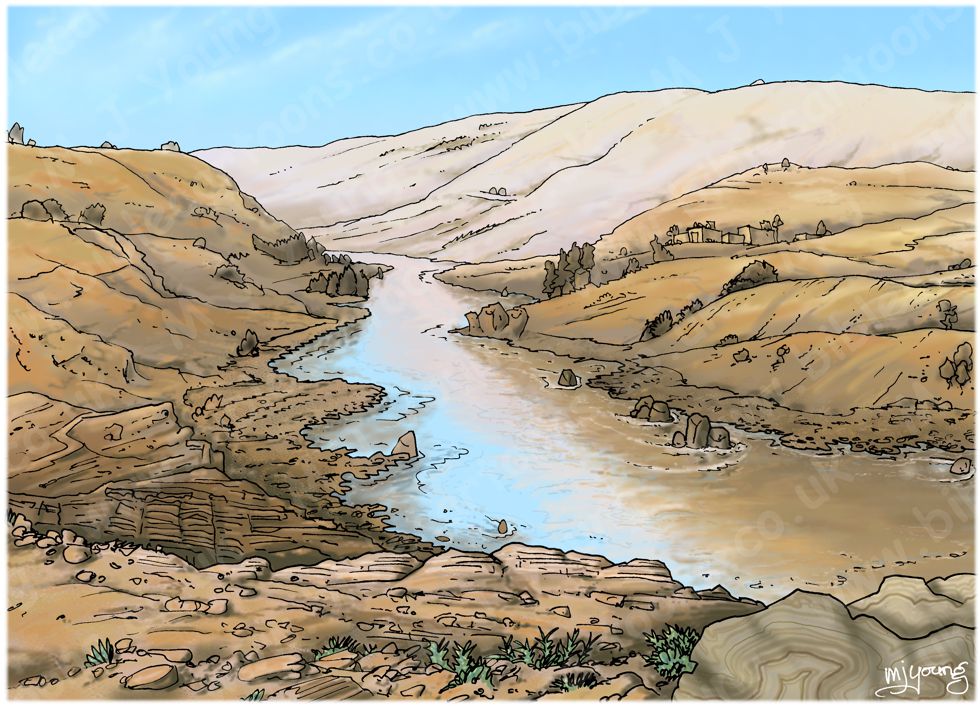 Here’s the scene without the figures, and with foreground flowers and a tree, that didn’t make it into the final scene.

Acts 02 – Pentecost – Scene 10 – 3000 Baptised – Landscape 01
The flowering plant on the lower left of the scene is a Bushy Bean caper plant (Zygophyllum dumosum) which is a type of succulent.

The tree on the right & in the background is a Nile Tamarisk (Tamarix nilotica). Tamarisk trees are quite abundant in Israel.

[1]
‘Sediments of Lake Lisan, called Lisan Formation, are exposed along a 220-km length of the Dead Sea Transform, from Lake Kinneret (Sea of Galilee) in the north to the Arava Valley in the south. The Lisan Formation, deposited from about 70 ka until 15 ka, consists of alternating laminae of white aragonite and dark detritus. The white laminae are composed of aragonite; the detrital material contains fine-grained calcite, dolomite, aragonite, quartz, and clays. Both types of laminae are up to a few millimeters thick. The paired laminae were interpreted as seasonal precipitates (varves): the aragonite is authigenic, possibly annual summer precipitate of Lake Lisan, whereas the dark laminae are detrital flood input into the lake during winter storms.’
(Source: http://www.tau.ac.il/~shmulikm/Lisan-Folds.html)