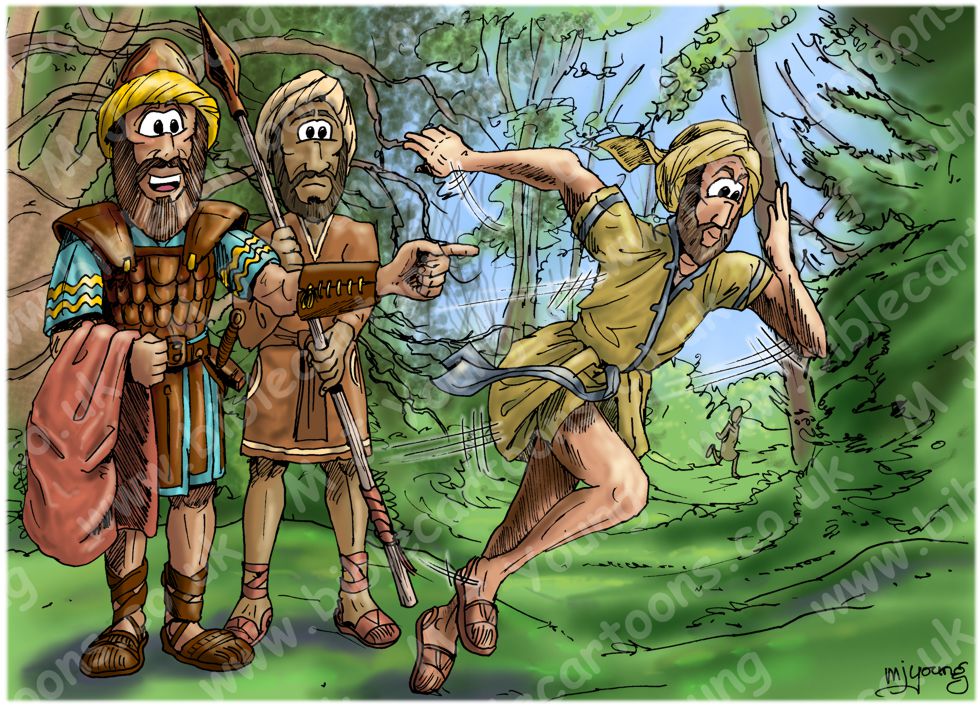 2 Samuel 18:19-23 (ANIV)
19 Now Ahimaaz son of Zadok said, “Let me run and take the news to the king that the Lord has delivered him from the hand of his enemies.”
20 “You are not the one to take the news today,” Joab told him. “You may take the news another time, but you must not do so today, because the king’s son is dead.” 21 Then Joab said to a Cushite, “Go, tell the king what you have seen.” The Cushite bowed down before Joab and ran off. 22 Ahimaaz son of Zadok again said to Joab, “Come what may, please let me run behind the Cushite.”
But Joab replied, “My son, why do you want to go? You don’t have any news that will bring you a reward.”
23 He said, “Come what may, I want to run.”
So Joab said, “Run!” Then Ahimaaz ran by way of the plain [1] and outran the Cushite.

TIME OF DAY:
Unspecified in the Bible text.

LIGHTING NOTES:
Diffused sunlight from above the forest canopy lights this scene.

CHARACTERS PRESENT:
From left to right: Joab (son of Zeruiah, nephew of David) [Army Commander], a Hebrew soldier, Ahimaaz son of Zadok, a Cushite (running in the distance).

RESEARCH/ADDITIONAL NOTES:
This scene was drawn in July 2012 for the London Olympics. I have just coloured it up & finished it in May 2016! The picture takes place in the forest of Ephraim.

Joab was a great general of David’s army and was one of three sons of a man named Zeruiah.

Ahimaaz was the son of Zadok the high priest.