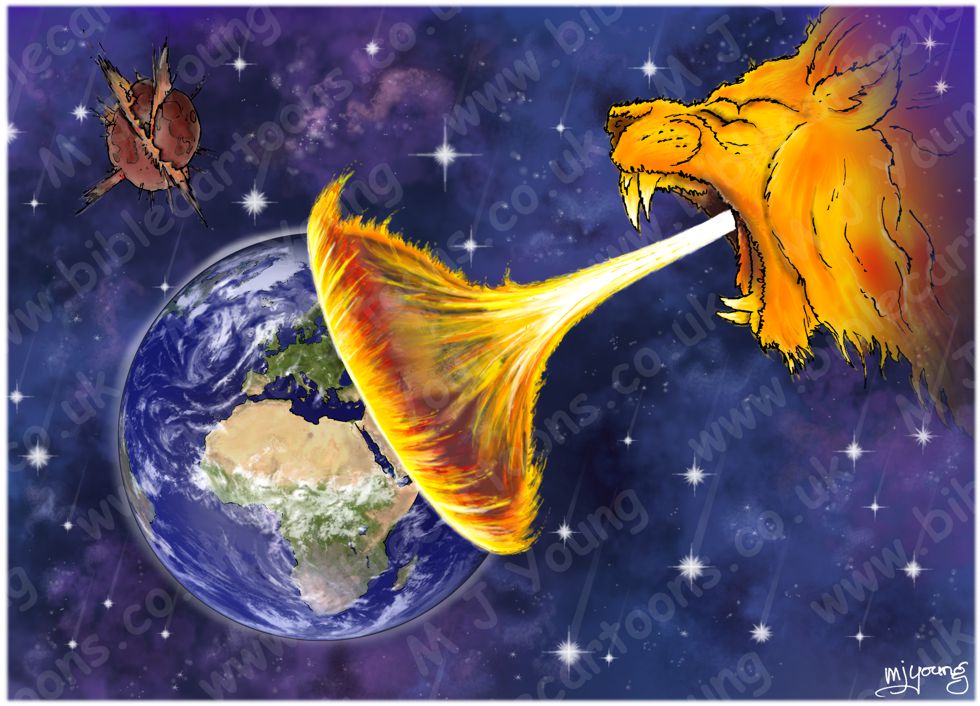 2 Peter 3:7-13 (AMP)
7 But by the same word [God’s Word] the present heavens and earth have been stored up (reserved) for fire, being kept until the day of judgment and destruction of the ungodly people. 8 Nevertheless, do not let this one fact escape you, beloved, that with the Lord one day is as a thousand years and a thousand years as one day. [1] 9 The Lord does not delay and is not tardy or slow about what He promises, according to some people’s conception of slowness, but He is long-suffering (extraordinarily patient) toward you, not desiring that any should perish, but that all should turn to repentance.
10 But the day of the Lord will come like a thief, and then the heavens will vanish (pass away) with a thunderous crash, and the [material] elements [of the universe] will be dissolved with fire, and the earth and the works that are upon it will be burned up.
11 Since all these things are thus [in the process of being dissolved, what kind of person ought [each of] you to be [in the meanwhile] in consecrated and holy behavior and devout and godly qualities, 12 While you wait and earnestly long for (expect and hasten) the coming of the day of God by reason of which the flaming heavens will be dissolved, and the [material] elements [of the universe] will flare and melt with fire? 13 But we look for new heavens and a new earth according to His promise, in which righteousness (uprightness, freedom from sin, and right standing with God) is to abide.

LIGHTING NOTES:
The fire provides the illumination in this scene.

CHARACTERS PRESENT:
God, in the form of the fiery lion.

RESEARCH/ADDITIONAL NOTES:
This picture is my response to reading this passage, & wondering what the end of the heavens & Earth might look like. I have also read Jesus’ own words regarding what will happen (see Matthew 24:29-36 below) & John’s vision of the end of the world (see Revelation 6:12-17 below). In light of those readings I have decided to make the moon appear blood read, even as it is disintegrating, & the stars falling from the sky.

I wanted to show fire coming from heaven & decided to show that as a beam of intense light/fire. The it occurred to me that I could embody the Lord as a fiery lion, looking rather like Aslan from C. S. Lewis’s Narnia novels.

I found a satellite image of the Earth which forms the basis of my design, however I have greatly modified the cloud patterns & various continental land masses on the original image. I have drawn a ring of intense fire beginning to move around the globe, which is coming from the lions’ mouth.

I have made the moon blood red, as it states in Revelation 6, but I also have it exploding, with fragments coming out of the molten core. 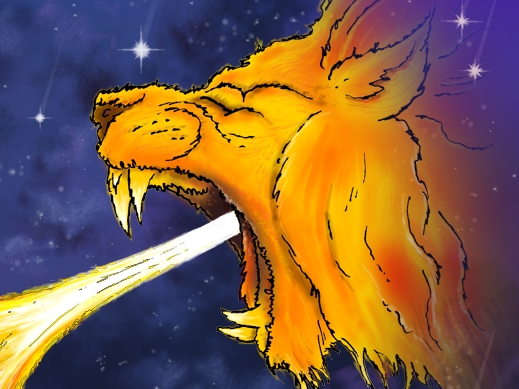 Close-up of the Aslan-like fiery lion.


Bible references:
Matthew 24:29-36 (AMP)
29 [Jesus said] “Immediately after the tribulation of those days the sun will be darkened, and the moon will not shed its light, and the stars will fall from the sky, and the powers of the heavens will be shaken.
30 Then the sign of the Son of Man will appear in the sky, and then all the tribes of the earth will mourn and beat their breasts and lament in anguish, and they will see the Son of Man coming on the clouds of heaven with power and great glory [in brilliancy and splendor].
31 And He will send out His angels with a loud trumpet call, and they will gather His elect (His chosen ones) from the four winds, [even] from one end of the universe to the other.
32 From the fig tree learn this lesson: as soon as its young shoots become soft and tender and it puts out its leaves, you know of a surety that summer is near.
33 So also when you see these signs, all taken together, coming to pass, you may know of a surety that He is near, at the very doors.
34 Truly I tell you, this generation (the whole multitude of people living at the same time, in a definite, given period) will not pass away till all these things taken together take place.
35 Sky and earth will pass away, but My words will not pass away.
36 But of that [exact] day and hour no one knows, not even the angels of heaven, nor the Son, but only the Father.”

Revelation 6:12-17
12 When He [the Lamb] broke open the sixth seal, I looked, and there was a great earthquake; and the sun grew black as sackcloth of hair, [the full disc of] the moon became like blood.
13 And the stars of the sky dropped to the earth like a fig tree shedding its unripe fruit out of season when shaken by a strong wind.
14 And the sky rolled up like a scroll and vanished, and every mountain and island was dislodged from its place.
15 Then the kings of the earth and their noblemen and their magnates and their military chiefs and the wealthy and the strong and [everyone, whether] slave or free hid themselves in the caves and among the rocks of the mountains,
16 And they called to the mountains and the rocks, Fall on (before) us and hide us from the face of Him Who sits on the throne and from the deep-seated indignation and wrath of the Lamb.
17 For the great day of His wrath (vengeance, retribution, indignation) has come, and who is able to stand before it?

View all Bible Cartoons in 2 Peter Go to Search by Bible Book page Do I need High or Medium qlty cartoons? FAQ’s