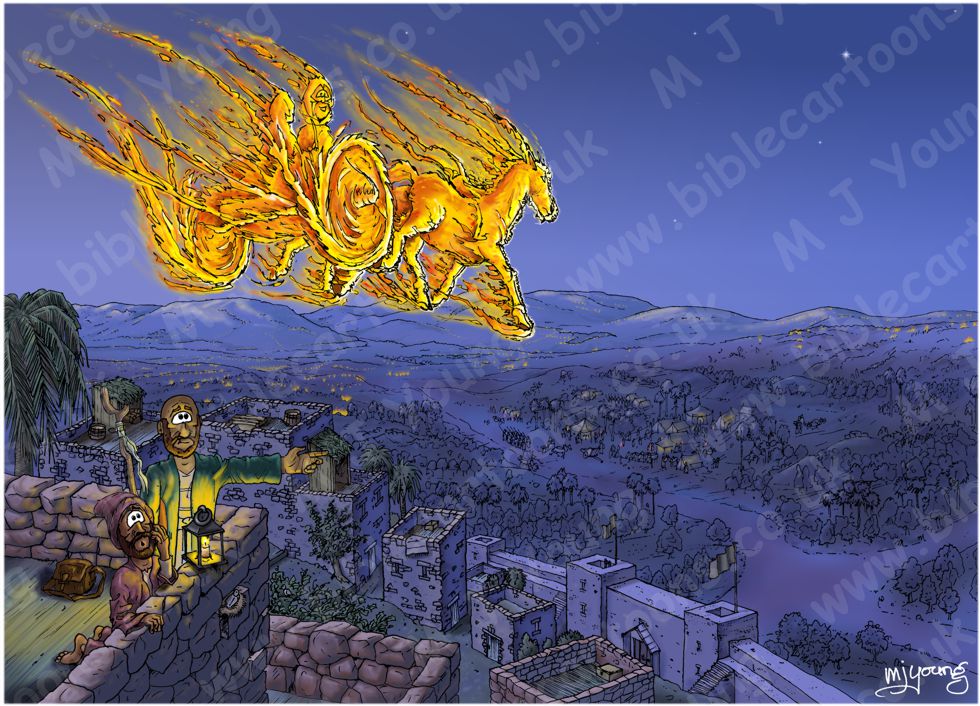 2 Kings 6:13-17 (ANIV)
13 “Go, find out where he is,” the king ordered, “so that I can send men and capture him.” The report came back: “He is in Dothan.”
14 Then he sent horses and chariots and a strong force there. They went by night and surrounded the city. 15 When the servant of the man of God got up and went out early the next morning, an army with horses and chariots had surrounded the city. “Oh, my lord, what shall we do?” the servant asked.
16 “Don’t be afraid,” the prophet answered. “Those who are with us are more than those who are with them.” 17 And Elisha prayed, “O Lord, open his eyes so that he may see.” Then the Lord opened the servant’s eyes, and he looked and saw the hills full of horses and chariots of fire all round Elisha.

TIME OF DAY:
Verse 15 tells us the time is early the next morning. I have set this scene just before sunrise.

LIGHTING NOTES:
The sun is producing a glow in the east, which is the left hand side of this picture.
There is a candle in a lantern which is producing a warm yellow glow on the figures in the foreground.

CHARACTERS PRESENT:
Elisha & his servant (Gehazi) are in the foreground. Elisha is standing & indicating the chariots of fire, whilst Gehazi is kneeling down.

RESEARCH/ADDITIONAL NOTES:
There are two versions of this scene, this one, with a single chariot (the closest one) visible & the one on the previous page, which has a multitude of fiery chariots, horses & charioteers in the sky & on the ground.

I drew & finished this cartoon in December 2014, as a canvas print present for my mum (her choice of subject too!) I have not been able to upload it until now due to delays in getting the canvas printed, since I didn’t want my mum seeing the design before she got the print! But now I have the canvas, here’s the picture!

Gehazi has sunk onto the wall in dread of the (human) army that is near by. As he comes to see the Lord’s fiery army, after Elisha prays, no doubt he will sink a lot lower! You can see a close up of the Elisha & Gehazi figures below. 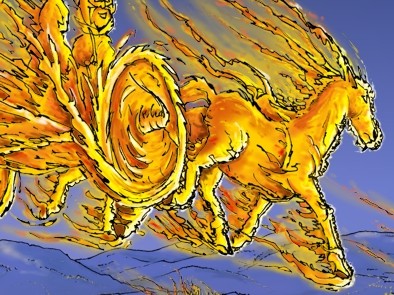 Close up of fiery chariot.

The Aramean army can just be seen in the middle distance, right of centre, where you can make out tents, horses, chariots, soldiers mustering, etc. There is a faint glow from oil lamps within the tents & from camp fires. You can see a close up of the Aramean army below. 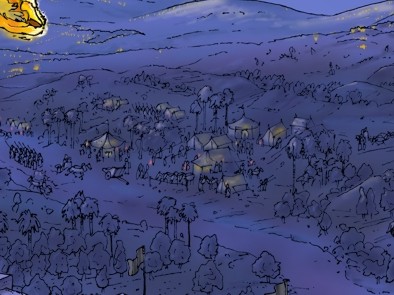 Close up of Aramean army camp.

I have decided to have the fiery chariots pulled by two horses, with two fiery figures in the chariot. I wanted the leading edges of the chariots, figures & particularly the horses to have white hot colours. I imagined those leading edges being blasted by air, & so being the hottest part of the chariot, they would be white. There are trails of yellow, orange & red flames streaming backwards from the vehicles, representing their rapid flight. You can see a close up of the largest chariot below. 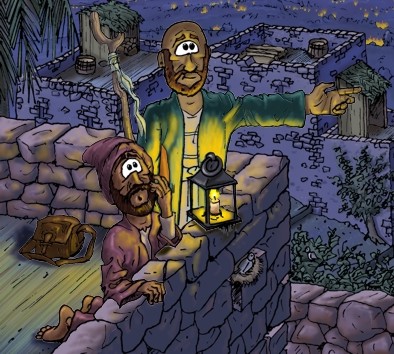 Close up of Elisha & Gehazi.

Notice that Elisha is carrying the same staff I have drawn in a previous scene. This staff was the one he gave to his servant (Gehazi) to place on the dead boys face in 2 Kings 04 – Shunammite’s son resurrected – Scene 11 – Gehazi runs.
You may also be able to make out an orange/brown cloth under Elisha’s right arm – that is the cloak that Elijah dropped as he was being transported up into heaven in my cartoon 2 Kings 02 – Elijah taken into heaven – Scene 06 – Chariot of fire.