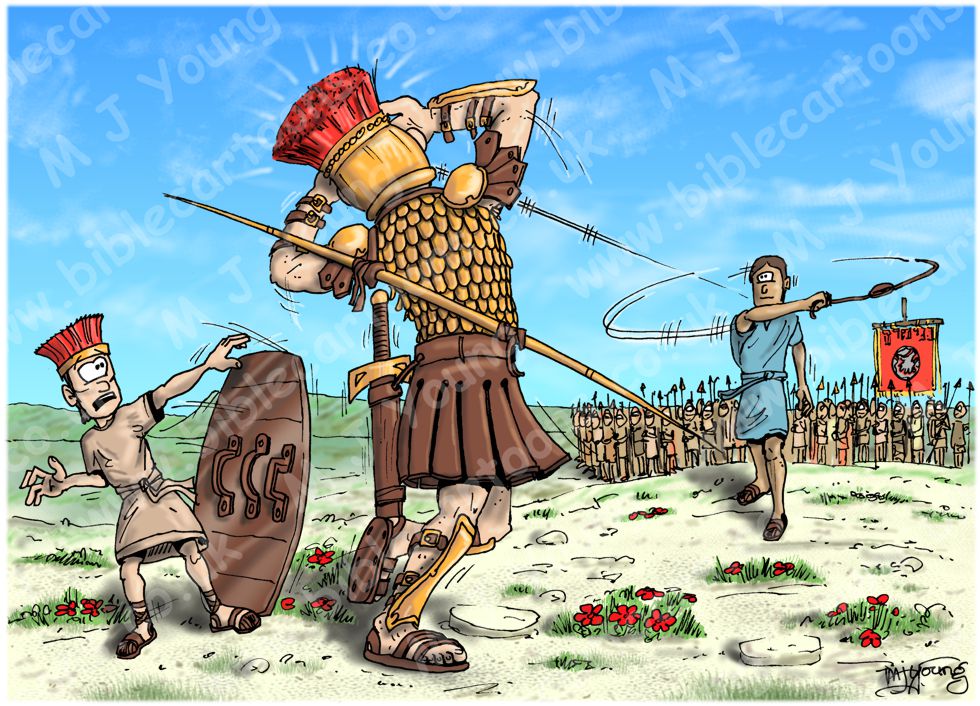 1 Samuel 17:41-49 (NLT)
41 Goliath walked out toward David with his shield bearer ahead of him, 42 sneering in contempt at this ruddy-faced boy. 43 “Am I a dog,” he roared at David, “that you come at me with a stick?” And he cursed David by the names of his gods. 44 “Come over here, and I’ll give your flesh to the birds and wild animals!” Goliath yelled.
45 David replied to the Philistine, “You come to me with sword, spear, and javelin, but I come to you in the name of the Lord of Heaven’s Armies—the God of the armies of Israel, whom you have defied. 46 Today the Lord will conquer you, and I will kill you and cut off your head. And then I will give the dead bodies of your men to the birds and wild animals, and the whole world will know that there is a God in Israel! 47 And everyone assembled here will know that the Lord rescues his people, but not with sword and spear. This is the Lord’s battle, and he will give you to us!”
48 As Goliath moved closer to attack, David quickly ran out to meet him. 49 Reaching into his shepherd’s bag and taking out a stone, he hurled it with his sling and hit the Philistine in the forehead. The stone sank in, and Goliath stumbled and fell face down on the ground.


Bible Doctrine Notes
17:45-47 GOD, Sovereignty (1.15B)
The young shepherd boy David, armed with a sling and shot, killed Goliath, the heavily armed giant Philistine soldier. Throughout the unfolding story of the Bible, God used unlikely people, and moved in dramatic ways to make His sovereign power known to both Israel and the nations involved with it.

17:45-47 ELECTION, Israel (4.13A)
God fights for those who are elected to carry out His purposes on earth. David gave God the credit for his victory over Goliath and that victory verified David’s election as king. It also witnessed to God’s reputation among the nations, which is a major purpose of election.