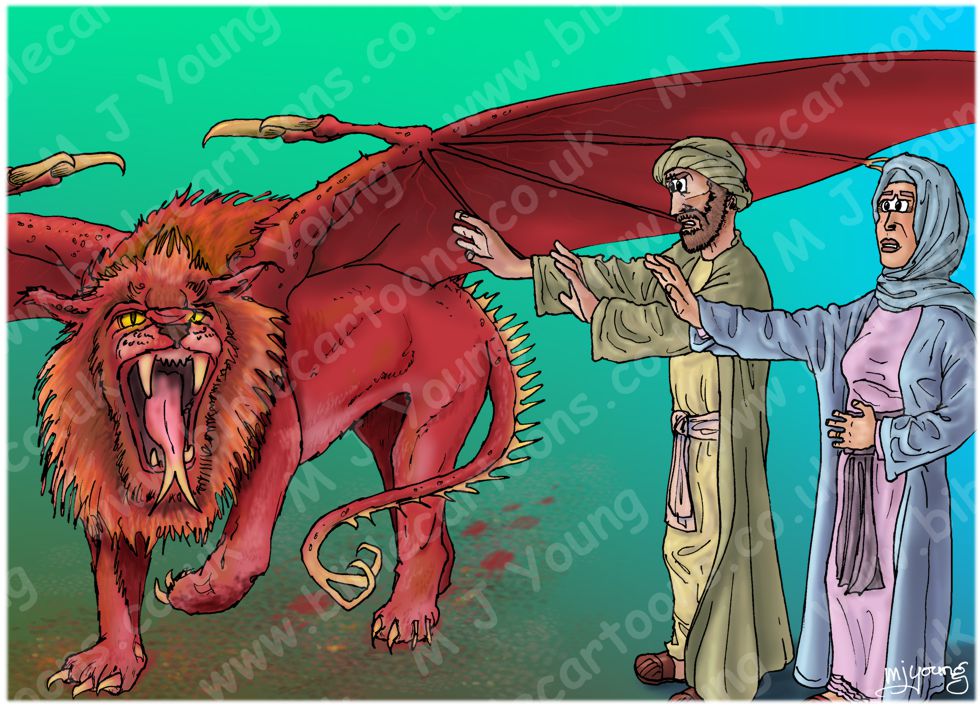 1 Peter 5:8-11 (ANIV)
[To elders & young men]
8 Be self-controlled and alert. Your enemy the devil prowls around like a roaring lion looking for someone to devour. 9 Resist him, standing firm in the faith, because you know that your brothers throughout the world are undergoing the same kind of sufferings.
10 And the God of all grace, who called you to his eternal glory in Christ, after you have suffered a little while, will himself restore you and make you strong, firm and steadfast. 11 To him be the power for ever and ever. Amen.

LIGHTING NOTES:
There is defused lighting coming from the top left of the scene, casting shadows to the right.

RESEARCH/ADDITIONAL NOTES:
This is a literal interpretation of verse 8 & 9 in the Bible text above, “…Your enemy the devil prowls around like a roaring lion looking for someone to devour. 9 Resist him, standing firm in the faith, …”

Initially I was going to draw the Devil as a lion, but I decided to add bat-like wings, spines down the back & tail, & claws on the wings, so as to make the beast more unusual & less like a lion. This is particularly important as I have drawn lions in previous scenes to represented the pre-incarnate Jesus, so I didn’t want any confusion between the two!

The two people are representative of Christians who are aware of the Devil’s schemes, & are actively resisting him. Their raised hands are gestures of resistance & defiance towards the Devil.
Their definitely NOT trying to stroke him!!!

As James 4:7 (ANIV) reminds us, “Submit yourselves, then, to God. Resist the devil, and he will flee from you.” I have drawn the Devil’s lion body just beginning to turn away from the Christian couple.

The Bible Knowledge Commentary has some interesting points to make regarding these Bible verses:

“Though believers should place their confidence in God, they should not be careless. Christians in conflict are to be on the alert, made strong and steadfast by Christ Himself.

5:8. Be self-controlled (nēpsate; cf. 1:13; 4:7) and alert (grēgorēsate; cf. 1 Thes. 5:6, 10). Christians should be constantly alert because the enemy (antidikos, “adversary”), the devil (diabolos, “slanderer”), is always actively seeking an opportunity for a vicious attack. This verse could also be a veiled allusion to the horrors of the Neronian persecution in the Roman Coliseum, in which lions mauled and devoured Christians. Satan desired to do the same thing spiritually, to defeat believers’ testimonies.

5:9. The devil can be and should be resisted. Resist (antistēte) means “withstand,” used also in James 4:7 (cf. antidikos, “enemy” in 1 Peter 5:8). It is a term of defense rather than attack. Christians may stand firm against Satan only if they depend wholly on Christ, standing firm in the faith (cf. v. 12; Col. 2:5). Peter also encouraged his readers by reminding them that they were not alone in their suffering. The knowledge that other Christians, your brothers throughout the world, were suffering, would strengthen their resolve to continue to stand firm.”
[Source: The Bible Knowledge Commentary: An Exposition of the Scriptures by Dallas Seminary Faculty.]

View all Bible Cartoons in 1 Peter Go to Search by Bible Book page Do I need High or Medium qlty cartoons? FAQ’s