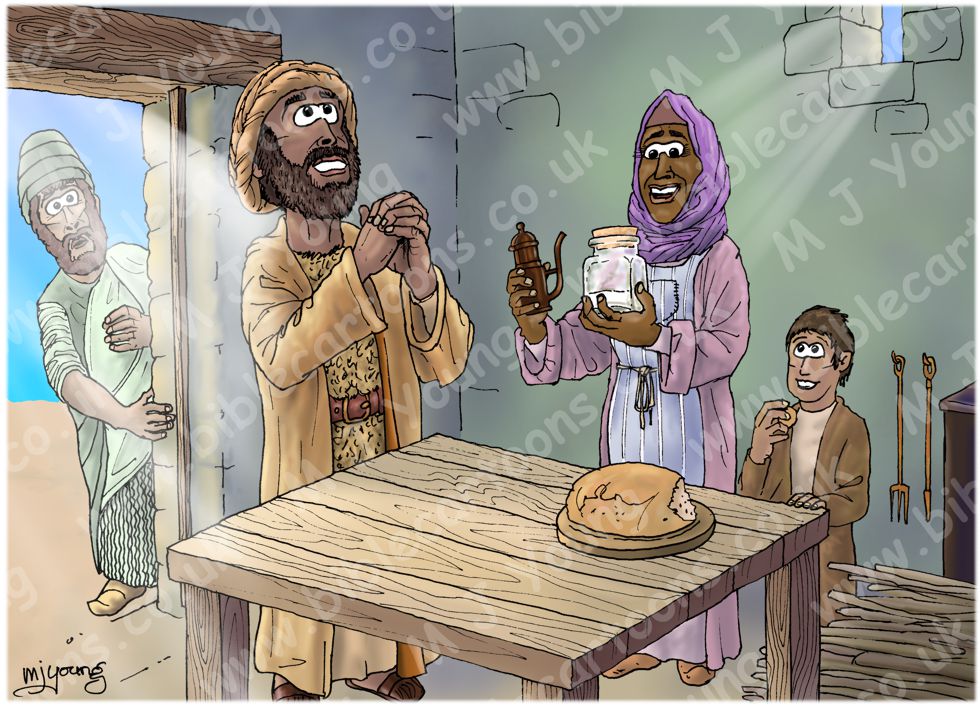 1 Kings 17:15-16 (ANIV)
15 She [The widow of Zarephath] went away and did as Elijah had told her. So there was food every day for Elijah and for the woman and her family. 16 For the jar of flour was not used up and the jug of oil did not run dry, in keeping with the word of the Lord spoken by Elijah.

TIME OF DAY:
Not specified by Bible.

CHARACTERS PRESENT:
From left to right: a curious & surprised Sidonian man, Elijah, the widow of Zerephath, the widow’s son.

RESEARCH/ADDITIONAL NOTES:
I enjoyed drawing this scene, particularly the light beams coming in from the door & window, & the expression on the Sidonian man’s face.

I wanted to draw figures from Sidon (a city state of the Phoenician people) that could be distinguished from my more normal Hebrew (Jewish) people’s garb, & so researched to see if there is any examples of typical Sidonian dress. I found a few stone relief carvings that suggest a garment that I could use, although these sculptures are probably highly stylized renderings of the actual costume of these sea-faring people. Whilst the widow herself looks very similar to my Hebrew people, the curious man at the door has a more obviously different costume.

The boy in the scene is the widow’s son. By his feet are the few sticks the widow tells Elijah she was collecting when she encountered him in 1 Kings 17:10.

Where is Zarephath?
Zarephath is an ancient city on the coast of Phoenicia (the modern day country of Lebanon), about 8 miles (13 km) south of Sidon (hence “Zarephath of Sidon” in the Bible) and 14 miles (22 km) north of Tyre.

There is a long record of Zarephath’s existence. It was inhabited from the Late Bronze Age (1600 BC) through the Byzantine Period (AD 600). This means the city was around in both the Old & New Testament eras.

Although ruined today, there is a modern village about a mile from the site today.

The name of the city has variations, due to changes over the years & in different cultures. Referred to as “Zarephath” by the Israelites, it was called “Sariiptu” by the Assyrians, “Sarpu’uta” by the Egyptians, “Sarepta” by those in Hellenistic and Roman times, and “Sarafand” today.
[Source: http://blog.bibleplaces.com/2012/08/picture-of-week-zarephath.html
Source: http://www.bibleplaces.com/zarephath/]

The 2 miracles that Elijah performed (un-ending flour/oil & resurrecting the widow’s son) were recalled by Jesus as an example of a prophet who is unwelcome in his hometown (Luke 4:24-26).