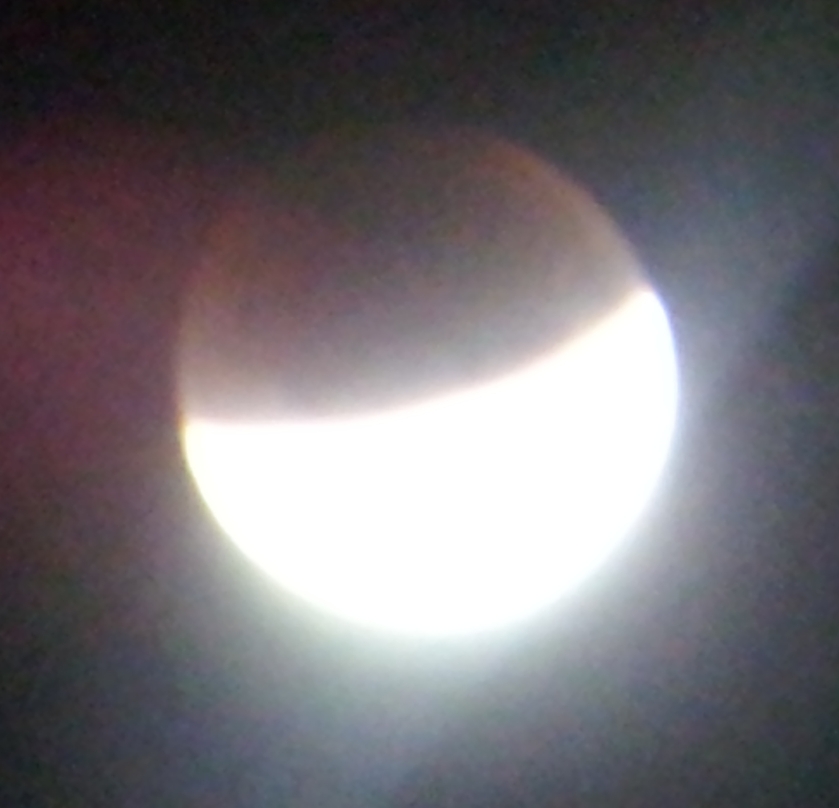 
I set my alarm & got up last night to witness the super moon & total lunar eclipse.

Got up later & there it was. It was a clear & starry sky (not that common in the UK!) so great for watching this 30 year event. Apparently the combination of full lunar eclipse AND the moon being at its closest point in orbit of earth only happens every 30 years or so.

The last year this supermoon+Full lunar eclipse occurred was in 1982, the year I left school & went to university of Northampton (Nene College as it was then), wow, was it really 33 years ago? Where did all that time go?

The first photo above is about half way towards total lunar eclipse. Believe it or not, this shot was taken on my mobile phone, through a pair of x10 binoculars, leaning against a window frame! Praise the Lord I managed to get 1 photo that way! My camera’s auto-focus was going mad, so had trouble getting any photo’s at all! 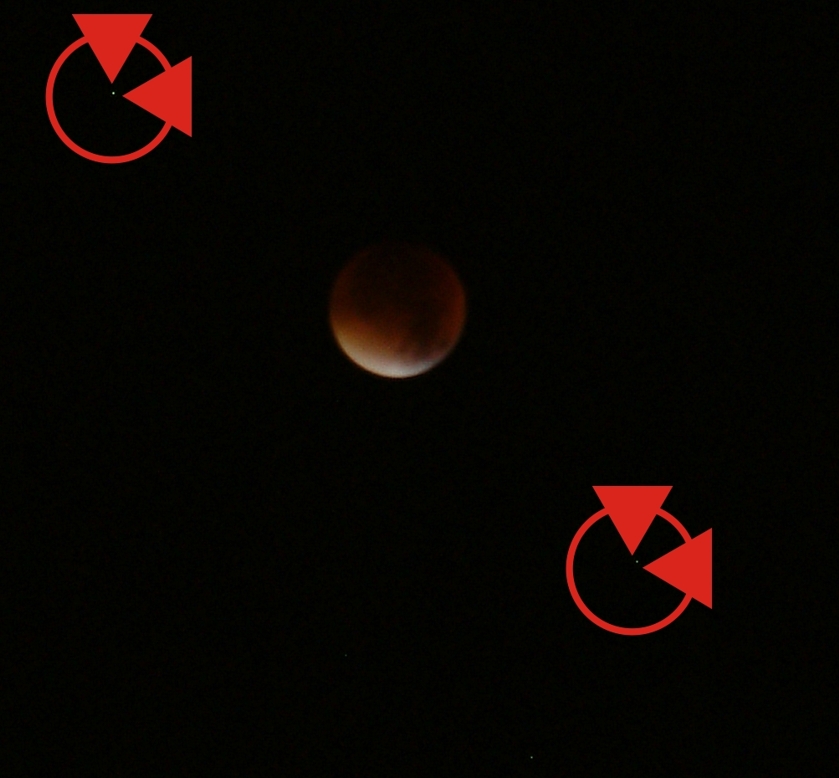 
The photo above is just after totality of the lunar eclipse. Total eclipse of the moon started at about 3:11am & finished at 4:23 am. I got out of bed (again!) at 3:36 to see the full effect of the full on lunar eclipse, but didn’t take a photo. The moon passed out of the penumbra (partial shadow & back into full brightness at 5:27 am… I DIDN’T get out of bed for that!

The red circle & pointers are to show that I got photo’s of stars too! As the total eclipse progressed the night sky got darker, which meant I could see many more stars than normal on a full moon night. 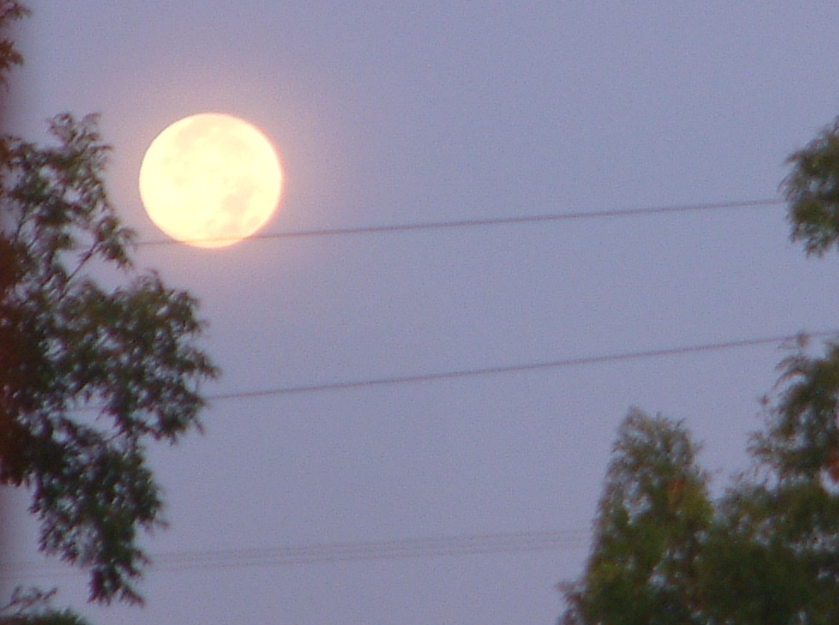 
The photo above shows this morning’s full moon, at about 6:40am, after the total lunar eclipse. The moon is descending & into the western sky, but wow, it is so beautiful & luminous. I praise the Lord for His creation!

References to a blood-red moon in the Bible

The Bible refers to a blood-red moon in a few places, which are noteworthy…

Ecclesiastes 12:1-2 (ANIV)
1 Remember your Creator in the days of your youth, before the days of trouble come and the years approach when you will say, “I find no pleasure in them“— 2 before the sun and the light and the moon and the stars grow dark, and the clouds return after the rain;

Jeremiah 31:35-36 (ANIV)
35 This is what the Lord says, he who appoints the sun to shine by day, who decrees the moon and stars to shine by night, who stirs up the sea so that its waves roar— the Lord Almighty is his name:
36 “Only if these decrees vanish from my sight,” declares the Lord, “will the descendants of Israel ever cease to be a nation before me.”

Joel 2:10 (ANIV)
10 Before them [a mighty army, posssible locust swarm, sent by the Lord] the earth shakes, the sky trembles, the sun and moon are darkened, and the stars no longer shine.

Joel 2:31 (ANIV)
31 The sun will be turned to darkness and the moon to blood before the coming of the great and dreadful day of the Lord.

The timing of this eclipse, & this quote is very interesting, as I have just completed drawing this scene for a Bible Cartoon! In my scene there are people prophesying, & a blood-red moon can be seen in the background: 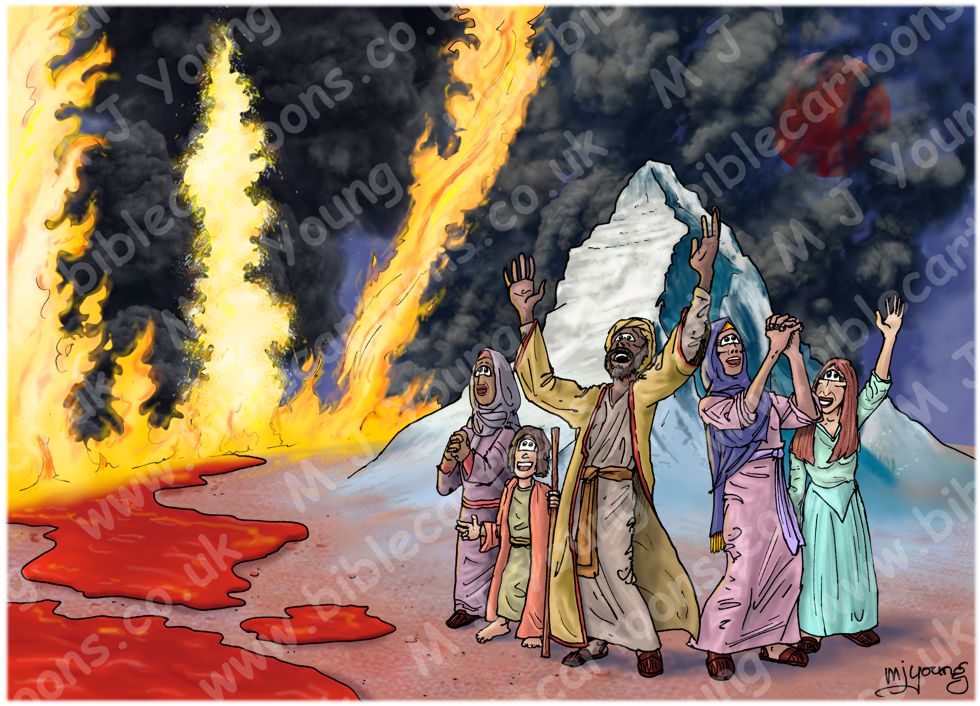 Follow this link to see this Bible Cartoon on the BC Gallery page, with download & purchase options:
Bible Cartoon: Joel 02 – Day of the Lord – Scene 01 – Future promises

Interestingly, the apostle Peter quoted from the prophet Joel, in his Pentecost address of the people of Jerusalem, in Acts 2:

Acts 2:19-21 (ANIV)
19 I will show wonders in the heaven above and signs on the earth below, blood and fire and billows of smoke. 20 The sun will be turned to darkness and the moon to blood before the coming of the great and glorious day of the Lord. 21 And everyone who calls on the name of the Lord will be saved.’

Matthew 24:27-31 (ANIV)
27 “For as lightning that comes from the east is visible even in the west, so will be the coming of the Son of Man.
28 Wherever there is a carcass, there the vultures will gather.
29 Immediately after the distress of those days

‘the sun will be darkened,
and the moon will not give its light;
the stars will fall from the sky,
and the heavenly bodies will be shaken.’ (Isaiah 13:10; 34:4)

30 “At that time the sign of the Son of Man will appear in the sky, and all the nations of the earth will mourn. They will see the Son of Man coming on the clouds of the sky, with power and great glory. 31 And he will send his angels with a loud trumpet call, and they will gather his elect from the four winds, from one end of the heavens to the other.”

Revelation 6:12-14 (ANIV)
12 I watched as he [the Lamb; Jesus] opened the sixth seal. There was a great earthquake. The sun turned black like sackcloth made of goat hair, the whole moon turned blood red, 13 and the stars in the sky fell to earth, as late figs drop from a fig-tree when shaken by a strong wind. 14 The sky receded like a scroll, rolling up, and every mountain and island was removed from its place.

[text made bold for clarity – MY]

If we are in the last times, & the end of history is coming soon, then surely it would be a good idea to respond to the urgency of what the Bible says. It is not too late to take Jesus up on his offer of eternal life & to become a Christian. But time is running out, so you’d better do it quick… you don’t want to be “left behind”!